REVIEW: Give In To Me by Lacey Alexander

I’ve been enjoying the H.O.T. (the Hostage Ops Team) Cops series even though each book has presented an issue that has prevented me from fully embracing the books. This story features Rogan Wolfe, a former H.O.T. cop who left his friends in Michigan to take a job down in South Beach. In the previous book, Rogan awoke to feelings for a former girlfriend too late. She had committed to another man and during a long weekend menage, Rogan made a play for her but she stayed with her boyfriend and Rogan was left unmoored. 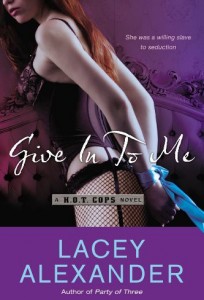 In Miami, Rogan feels renewed. His experience as a detective were being wasted in the small town in Michigan. Here, there are increased stakes, cases to be solved, and risks to be taken. Rogan also finds himself intrigued by attorney April Pediston.

April is an overworked, overextended corporate lawyer who does pro bono divorces for low income women. She also financially supports her youngest sister and serves as the on call babysitter for the middle sister. Since the Pediston’s parents deaths, April has watched over and mothered her sisters and now as adults, she hasn’t been able to cut the apron strings and her sisters take advantage of that constantly.

The two meet at Café Tropico where April is meeting her pro bono client, Kayla Gonzalez. Kayla is trying to divorce her unsavory and abusive husband, Juan Gonzalez. Junior Martinez is the target of the Miami police for drug dealing and Rogan is checking out Café Tropico where it is rumored Junior is making drug deals. Sparks fly between the two immediately but April resists, not because Rogan is a cop and she is an attorney, but because she doesn’t have time for her pro bono work let alone a random man.

Reading her body’s responses, Rogan guesses that April would like to be convinced. He tells her that each time that they’ve kissed, she has wanted him to overpower her and April doesn’t deny it. However, April doesn’t recognize that she has certain type of bedroom kink, one in which she likes to be overpowered and taken without consent.

There were two primary reasons why this didn’t fully work for me. First, I really chafe at the “man knows best” sort of stories and there is no question that Rogan plays the role in this story. He’s a good guy and doesn’t come off as an aggressive asshole in any fashion. And April is set up perfectly as the woman with too many responsibilities who can’t let go of anything without a push. Not in bed or out of it. Yet, every time that Rogan told April he understand what she needed sexually even though she voiced the opposite, my hackles rose.

The extent to which the reader accepts April has given an unspoken consent to the sexual acts will be the measurement of how successful this story is for each reader. I was discomfited throughout the story even though intellectually I could see what was being attempted. The other thing I did not like was that the Latino characters were low income or drug dealers or abusers. It would have been nice to have some balance. C+