REVIEW: Getting Real by Ainslie Paton

Yeah! A rock star book featuring a female singer. That was my response upon being sent this ARC from Escape Publishing. I really enjoyed your voice in Grease Monkey Jive and I wasted no time in diving right into this story. 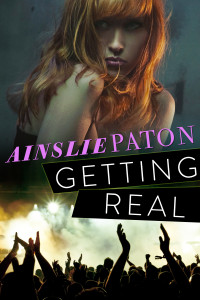 The first word I’d use to describe Getting Real is authentic. The story tracks Rielle Mainline and her band Ice Queen as it embarks on a world concert tour that begins in Australia. Rielle has avoided Australia for years because Sydney is the site of her greatest tragedy. Even being in Australia is wreaking havoc with her nerves but this world tour is the culmination of the band’s hard work.

Jake Reed is hired as the tour manager but absorbs even more responsibilities when Ice Queen’s production manager is sent home for drug use and alcohol abuse. Jake’s worked concert tours before but this is his biggest. He becomes responsible for making sure the show runs flawlessly from everything from the sound to the stage effects. The worldbuilding is excellent. Even if the touring details aren’t accurate, only an insider would know the difference. So many little details are sprinkled throughout that I felt like I was on tour with the Ice Queen.

In the general scheme of things, the sound guys thought they were kings because no one would hear the concert without them. The lighting guys acted like big shots because no one would see anything without them, and the staging roadies would bet good money on being the only ones who did any worthwhile work at all. Front of house fought with backstage, spark fairies slagged off riggers, video techs looked down on roadies, security got in the way of a good time and everyone had it in for the tour manager who could make their life hell. And that was just how Jake liked it.

Unfortunately for Jake he falls almost immediately for Rielle. Most of the guys on the crew do because not only is she an attractive woman with a great body but she has an amazing voice and stage presence. Charisma bleeds from her when it is necessary. Interestingly, in the book, the only time that Rielle is really charismatic is on stage but even that came off as real to me. She turned herself on to perform and shut down off stage.

Because of Rielle’s emotional difficulty with being in Australia and her perfectionist tendencies, sometimes Rielle comes off as abrasive. Rielle worked hard to get where she was and she expects everyone around her to place the same importance on their jobs in pulling off a top notch concert. Even though she is hard on others, she’s the most critical and demanding of her own performance.

The romance between Rielle and Jake is an angry one at times. Jake is an employee of Rielle’s and thus must take her crap when she dishes it out. She’s talent. That sort of power dynamic is uncomfortable for me when it is reversed as well. However, Rielle is just self aware enough to know that she’s crossing the line even if she can’t help herself. There is a sweet romance between her brother and bandmate, Rand, and his high school sweetheart. The sweetness of it kind of leveled out the acerbic romance of the lead characters but I wondered if it was even necessary.

The struggle I had with the story was that it felt overly long and when Rielle’s big secret came out, I wasn’t sure it matched the emo angst Rielle had displayed throughout the story. Was the big moment her catharsis or was it just the tour itself? I pondered this during the denouement and couldn’t come to any conclusions. Her trauma and her response were two pieces of a well constructed puzzle that didn’t really fit. C+