Review: Get What You Need by Jeanette Grey 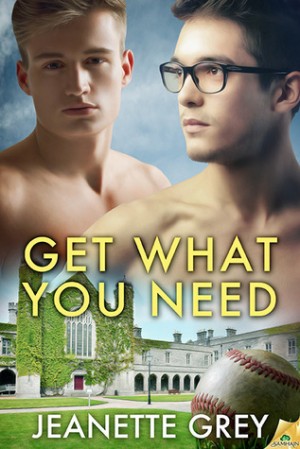 Greg London is a gay engineering graduate student who shares a house with three other guys.  The most recent addition is Marshall Sulkowski, a senior undergrad who is studying history while on a baseball scholarship.  As it happens, Marsh is “bi-ish” – “Girls are fine. Guys are better” – and both are crushing on the other.

For most of the book, the guys are at cross purposes.  Greg  thinks he’s such a geek; he can’t understand how someone so hot and sporty like Marsh could want anything serious with him and from the other side,  Marsh thinks Greg is so smart and together he couldn’t possibly want a serious relationship with a guy like Marsh.  In some ways, it was a version of the “big misunderstanding” which is my least favourite trope.   Here, I could understand why they were reluctant to lay it all on the line and state clearly how they each felt and what they each wanted but it was still frustrating most of the time. (I recognise this is a double standard somewhat because back when I was dating, being emotionally brave was really challenging for me.)  In their own ways, the internal feelings of each guy was understandable but it did take a very long time before they actually just said something flat our rather than dancing around it all.

Marsh’s dad found out Marsh was bi over the summer and has withdrawn funding for the portion of the tuition the baseball scholarship wasn’t covering.  Marsh is at a crossroads in his life because of it.  He’s been told all his life he’s nothing but a dumb jock and he’s completely demoralised.  Because of that, I was prepared to cut him some slack for his lack of forthrightness with Greg – but only a little.

Greg is a workaholic, desperate to succeed and keep making his parents proud.  He is also the guy that everyone else comes to when they need help and he basically can’t say no. This means his schedule is ridiculous and he is making himself sick by burning the candle at both ends.

Gradually as these guys hook up, they (particularly Marsh) take small steps to be emotionally vulnerable but they don’t really talk until quite late in the book.  That made it a bit difficult to see the relationship as more meaningful than just sex.  Good communication is one of the hallmarks of a HEA, in my opinion and they demonstrated pretty crappy communication most of the way through the book.   That being so, I thought the exchange of “I love you” was too quick. I could understand each wanting more but until they really started to talk to one another, I couldn’t understand the deeper emotion – or at least, I didn’t trust it.

Because we get a fairly even share of each main character’s POV,  the reader mostly knows what is going on in the other’s head. Sometimes it meant I wanted to flick my fingers against both guys’ foreheads.  Thank goodness Yulia was around for Marsh to act as that person.  Yulia was a little different than the usual “best friend” stereotype because she and Marsh had occasionally had sex.  It is mostly now just a very close friendship; the last time they had sex was about a year before.  I really liked how the story showed Marsh to be genuinely bisexual.  It wasn’t just something that was paid lip service.  It was nice to see it portrayed in a non-erasing way.

There was a bit of pronoun abuse in the some of the sex scenes but they were otherwise pretty good and not so numerous as to take over the book.

One of the things I really liked about the sex between these two guys is the sexual persona Greg takes on.  He doesn’t want to be vulnerable. He’s worried Marsh only wants to scratch an itch with a convenient body.  He therefore takes a more aggressive role in bed than he would naturally choose (which is freeing in its own way).  They both enjoy the sex they have but there are things Greg would like from Marsh that he won’t allow himself to ask for because it requires a level of emotional vulnerability he’s not prepared to risk.   Usually I dislike when flipping who the receptive partner is in anal sex is a big deal in a book.  Because very often, it is presented like a menu choice which has to be ticked off some arbitrary list.  But here it was a big deal. It meant something and the groundwork for this was laid all the way through the book.   Greg is a person who’s life is so closely controlled, ordered and scheduled, he longs to let go and have someone else take charge sexually.  But that’s reserved only for someone very special.  Marsh, on the other hand, had been usually a top but he loved bottoming for Greg. He didn’t have the same… not hangups… emotional linkage perhaps (?) as Greg did, so he didn’t find bottoming particularly vulnerable. I had the sense they would have a very interesting and varied sex life once they got the communication thing down.

Marsh and Greg appear to be opposites in many ways but Marsh actually loves to take care of Greg and Greg needs taking care of – left to his own devices he will burn up from the inside out.  Marsh needs a cheerleader, someone to be on his side and give him encouragement and Greg does this for him.  So I felt that even though the guys are very different, they complement each other well and I thought they could make it in the long term.

I enjoyed the writing style and I liked Marsh and Greg – separately and together.  There wasn’t much about baseball – which surprised me because Marsh is in college because of a baseball scholarship. There was no discussion about any difficulty he might have (or even that there was no difficulty) as regards his sexuality within the team and there were really only passing mentions of training and such.

There weren’t that many females in the story . Yulia didn’t seem to really have a life apart from Marsh and I would have liked to have seen her have more depth rather than just to be there to give Marsh a slap upside the head.

Once Greg and Marsh started talking to each other, things got much better but that really only happened at the end of the book, and up until then the story was kind of frustrating for me.

It hadn’t been the plan to spill his guts to Greg the way he had. The minute he’d started talking, though, it had all come pouring out, and it had been terrifying and freeing, speaking aloud things he’d put so much effort into keeping silent.

A reader who doesn’t mind misunderstandings in her/his romance novels will probably enjoy Get What You Need better than I did.  That said, I liked it and would read more of your work. Grade: C+.

→ Kaetrin
Previous article: The Marketing of Slave Fantasy: A Bridge Too Far?
Next Post: Wednesday News: Silicon Valley’s lack of diversity, Technology and the future of education, social media and group mourning, and ebook subscription services