The first book in this series, “Confessions of a Slightly Neurotic Hitwoman,” was a pleasant surprise for me. It’s totally unlike what I normally read and in fact contains some elements I would have sworn would keep me from enjoying it but … enjoy it I did. I knew this sequel was due to be released in October which excited me but also somewhat alarmed me. Sure, I wanted to keep reading further in the life of Maggie, “God,” “Doomsday,” Patrick and all the other crazies of the first book but I also wondered if the second book might come off as a rush job. Let’s just say I finished the last page with mixed feelings. 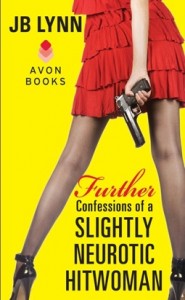 Maggie’s niece Katie, injured in the car crash that killed her parents and has left Maggie with the ability to understand what Katie’s pet lizard “God” is saying, is still in the super expensive rehab facility. The bills of said facility are what originally caused Maggie to take a mobster up on an contract offer to kill his son-in-law (who put the mobster’s grandson in the same facility). Now the mobster is offering Maggie another job with the proviso that if must be done at an upcoming wedding and she can double the price if the death is public. He tells her it’s not only killing the drug dealer but also making a point. Maggie wavers for a number of reasons before discovering something about the intended hit that changes not only her mind but that of “God” as well. Maggie can only listen to so much gripping about her morals and ethics from a 6 inch lizard no matter if the money could help Katie.

The hit is not the only thing complicating Maggie’s life. Her creepy boss is getting creepier and her work friend with quasi-psychic abilities keeps warning Maggie about bizarre things without also being able to actually interpret and explain the warnings. Maggie’s best friend is turning into a Bridezilla and has picked out a truly hideous salmon colored bridesmaid dress for Maggie to wear. An old high school acquaintance suddenly shows up and has insinuated himself between Maggie and her friend which ticks Maggie off since she is supposed to be Alice’s best friend. Maggie’s getting strange vibes from a guy her three aunts want to become Maggie’s boyfriend. The aunts are acting a little strange themselves and now Maggie’s getting threatening phone calls that might be related to her father who is in the State Penn. Worst of all, Maggie might be without any backup other than “God” during the hit and his snarky comments, spoken in an “Alan Rickman” sounding voice, will only help Maggie so much.

I finished the story still engaged with the characters and the outcomes of the many events going on. And there are many, many events going on. At times I felt Maggie was zinging around like a pinball during an attempt to break a record and get a high score. The book is packed with action, there are seemingly a dozen different threads all being woven together and I felt mentally exhausted trying to keep it all straight. I can’t even imagine how you managed.

Maggie still has her standards – she’s a hitwoman but not an amoral one. As she recounts – perhaps in an effort to assuage her own guilt and keep readers rooting for her – for the first two hits, she was actually acting in self defense. During this one, there’s another very important reason this person needs to be dead. But did Maggie actually carry out the hit? The mobster thinks she has and it looks like she’ll get the money but “God” only knows. After all, he has been watching a lot of crime shows on TV.

This story seems to focus more on Maggie’s personal life instead of her hitwoman activities. Her life is even more complicated than in book one and not all of it is pretty. You’ve elaborated a bit on some of the dark secrets in her past and the twisted family relationships of her present. By the time book two closed, it was beginning to feel like one of those interstate multi-car crashes in thick fog. After the 20th car hits, it all starts to blur, you get numb and unable to process anything further. I’m not sure how many books you plan to write in this series and thus how much needs to be crammed into each one but it was hard for me to keep it all straight enough to care about.

Still, the characters aren’t static – by which I mean that they might be doing other things in the second book but they’ve also evolved personally from book one. Maggie might even finally be moving forward and letting go of past hurts that have held her back. The “in charge” personality you’ve given her is grounded in something from her childhood – which makes sense – but perhaps she’ll relax a touch in the future (and allow me to as well).

“Further Confessions of a Slightly Neurotic Hitwoman” definitely shows your unique voice but I didn’t feel it had as much of the humor that I liked in the first book. It ends with even more characters to juggle and issues to gum up the works. A few questions have been answered but even more exist for the next sequel. By the end, I felt exhausted from the frantic pace. I will certainly plan on keeping up with Maggie and Co, though. C+

→ Jayne
Previous article: To Dox or Not to Dox: Who Decides
Next Post: REVIEW: Personal Demon by Susan Sizemore