I clicked on the link to your book because covers with tattooed men always capture my attention, but it was the blurb and price point ($.99 when I bought it) that tempted me. 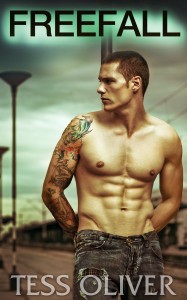 Alexander “Nix” Pierce is a tattoo artist. After barely making it through high school, Nix used his inheritance from his grandfather to open a tattoo shop called Freefall. Most days he works at the shop with his assistant, Casey, and hangs out at night with his best friends, Dray and Clutch, and checks in on his grandmother, who is in the mid-stages of dementia. Dray is a scrappy guy, often in fights, and always a man whore. Clutch renovates classic muscle cars. Nix is the sensible one of the three of them. He’s not really interested in any girls (although they’d love him to be) because he’s already seen his dream girl. He carries her picture in his wallet, it’s a pin-up girl pose, with a beautiful girl who has white blond hair and the bluest eyes he’s ever seen. Imagine his shock when his dream girl walks into this shop.

Scotlyn James doesn’t speak. She’s been mute since a car accident that killed her entire family. She was picked up off the streets by wealthy Lincoln Hammond, who wants to own her. Scotlyn is not interested in Lincoln in that way at all, but he’s provided everything for her, and she can’t seem to find a way to leave him. When Lincoln decides that it’s time that the horrific scar the goes up and down Scotlyn’s side be covered by a tattoo, she reluctantly agrees. Lincoln has it all worked out. He’s had an acquaintance who is a graphic artist create the design and recommend the artist. And now Scotlyn has agreed to get it covered. Scotlyn really isn’t engaged in the process, but usually it’s easier to go along with what Lincoln wants than go against him.

But the moment she sees Nix, she knows he’s different. First, he is respectful of the fact that she doesn’t speak. And he really seems to see her. Even though she doesn’t speak, it’s as if they are somehow able to commune. For his part, Nix is astounded to find this beautiful woman in his shop, and disappointed to know that someone got there before him. But as he begins work on the tattoo, he realizes that there is something terribly wrong with Scotlyn and Lincoln’s relationship. And he feels the inextricable pull towards her.

This is the first book I’ve read by you, and overall, I enjoyed the reading experience. I will say though that the story felt a bit “surface” to me. Scotlyn has been in a horrible accident, and is clearly scarred both physically and mentally by it. But other than everyone saying what a survivor she is, we never really learn much about the accident, how she ended up on the streets, or what motivated her to pose for the pictures. Nix is a lovely hero. All caregiving and sweet, and is surrounded by an interesting cast of characters, all of whom seem to be drawn with very broad strokes. The romance between Nix and Scotlyn is sweet and romantic, but given that the characters are so broadly drawn, I found it difficult to fully engage with them. I also felt like Lincoln had the potential to be quite an interesting “bad guy”, but you resorted to a cookie cutter big bad, which I found unfortunate.

All of that being said, I actually really enjoyed reading the book, and while I thought that it had potential to be a much stronger story, I would give it a measured recommendation. If you’re looking for a sweet, gentle New Adult romance, with a heroine with an interesting affliction, Freefall might be a good book for you. Final grade: C+