Ruby Maguire is done with being jerked around by men. Now she just needs to know three things about a potential bedmate: his name, where he’ll be in a week’s time and what it is he wants from her.

Damon West knows plenty about subterfuge and secrets, and nothing about being truthful with women. But Ruby demands honesty between them so Damon gives her as much as he can: I’m Damon West. I’ll be leaving Singapore in a week. And I want you to touch me.

At least, that was the intent…but something’s telling normally bulletproof Damon that one week with Ruby might not be so easy to recover from….”

After all the glowing accolades your books have garnered here and from friends whose reading taste I trust, plus the one other good reading experience I had with another of your Presents novels, I kept your name simmering on my back burner of authors I needed to get back to. Here I am. It sounded like I might have a winning experience in your latest book “Flirting with Intent.” Sassy sounding heroine + mysterious hero who are thrown together in intense hawtness – though in Hong Kong, not Singapore. It started well but, alas, didn’t end well for me. 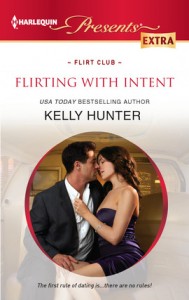 The first half of the story is great. Ruby and Damon are refreshingly honest with each other and since they’re both such experts in reading people and have had some similarities in their life experiences, they click – with each other and with me. The conversations are light, funny and zip around like quicksilver. It’s like watching two evenly matched verbal athletes. Or like listening to intelligent conversational foreplay. And this is before they start singeing the sheets and shocking the limo driver. Picture me with a big grin as I read it.

And then….and then all the secrets start coming out – or being revealed. Things start to get darker in tone and I’m wondering where my light, flirty book went. Suddenly it’s fast forward to Australia and two weeks at Damon’s beach house – which sounds lovely by the way. And despite these two getting to know each other better and having fun and finding out that they just might want to possibly explore maybe making room in their lives for each other, I couldn’t shake the feeling that this section was the literary equivalent of wheels spinning in the mud. Despite everything I just said in the previous sentence, I felt stuck. I know that’s contradictory but I just wanted something to happen. It was with immense relief to my reading self that Ruby and Damon then head back to Hong Kong.

Until they got there and I began to feel slightly bored with descriptions of corner offices and linguistic requirements for Ruby’s new office manager. I knew that a secret Damon was keeping from Ruby had to go off like a bomb soon and then they’d need to pick up the pieces and regroup before the HEA. But by this time the page count was also running short. Then the grenade went off, the fallout was intense and somehow Ruby pulled understanding out of her hat and effected a reconciliation that flung us back to the cute opening, all in a very short space of time.

I finished reading with a feeling of whiplash, which I think was in part due to the whole of the book not matching the light tone I’d read into the blurb. There is some serious shit going on here but the pace just seemed “off” and the length too short to do justice to the issues presented and the pain Ruby and Damon go through. C