REVIEW: Fire Inside: A Chaos Novel by Kristen Ashley

Lanie Heron is a survivor. She survived loving her man so much, she took a bullet for him. She survived his betrayal and involvement in the mob. She survived choosing to stand by him and nearly getting killed. She survived her childhood, complete with philandering father and drunken mother. She’s survived all of this by limiting who she allows to truly infiltrate her life. Her best friend Tyra, Tyra’s husband Tack, their kids, her sister, that’s it. Lanie is not looking for love. In fact, she actively and emphatically does not want love in her life. All that being said, a girl has needs. So one night, while at a party at Chaos (the motorcycle club her bestie’s husband is President of), she approaches Hopper Kincaid. She’s decided that she wants and deserves one night with a man. She wants nothing but that one night: no romantic entanglement, no sweet talk, just some good sex. She’s sure that Hop is just the man for it. He’s good looking, seems to be a decent sort, and gives off a vibe that says he’s awesome in bed. 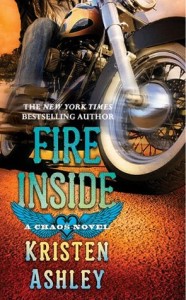 Hop is quite sure that having sex with Lanie is a really, really bad idea. He knows she’s a lady, she’s under Tack’s protection, and he knows she’s been irrevocably scarred both physically and mentally by her past. But she’s gorgeous, and she assures him that she absolutely will not be looking for more than the one night from him. She just has an itch that she’s pretty sure he can scratch for her. Lanie makes a strong case, and Hop agrees. They have some seriously wild and passionate sex, and Hop realizes immediately that there is no possibility of just one night, he wants more.

Lanie is adamant that one night with Hop is all she’s going to have. But she’s deeply attracted, and he’s fantastic in bed and he’s very persuasive. Next thing you know, Lanie and Hop are starting a relationship. Or, Hop is having a relationship with Lanie. He’s supportive, generally kind, considerate of her quirks, and delights in her dramatic side. Lanie is less delighted. She emphatically does not want anyone to know about what she and Hopper are up to, particularly because it’s not going to last. But the longer Hop is in her life, the more she leans on him. The more she wants to see him and be with him. But will Hop ever be able to get around Lanie’s belief that they shouldn’t be together?

I have mixed feelings about this book. I was really looking forward to Lanie’s book, given that we got to see first hand what she went through in Motorcycle Man. Hop also featured in Motorcycle Man, and not in a particularly positive light, so I was really interested to see how you would redeem Hop, who definitely didn’t seem like a good guy. The good news is, I thought you did a great job of redeeming Hop. Turns out, he’s a terrific dad, has some pretty hefty baggage of his own, but is driven and serious about Lanie and he’s willing to put himself all the way out there to gain Lanie’s trust and eventually her love. The bad news is, Lanie got on most of my nerves. Listen, I’m a dramatic girl. But at 42, I understand that throwing a hissy fit because my soda overflows is the action of a ten year old girl. Lanie is off the charts dramatic. She yells, throws a lot of attitude and flies off the handle pretty much any time things don’t go her way. If she were 22 in the book, that would be one thing. But we’re talking about a woman in her 40’s. She seemed like a whole lot of trouble. Multiple times during the book, she throws a fit, stomps off and won’t give Hop a chance to talk to her. For his part, Hop also jumps to conclusions a time or two. On the whole, these two behaved a lot more like high school students in love than grown adults in love. The disappointing part for me was that I really thought Lanie was a chance to show how someone grows from serious adversity in their lives. But I felt like Lanie remained mostly static, a diva who spent a lot of time being really dramatic. I also found that the book ended quite abruptly. Or perhaps it was because I was looking for more growth, more evidence that Lanie had truly connected to Hop, so it felt like there was more to write.

While this is definitely not my favorite of your books associated with Chaos, I always enjoy visiting the characters there. Even though Lanie and Hop didn’t deliver exactly what I was looking for, I’m still really looking forward to what’s next for the men of Chaos Motorcycle Club. They’re among my favorite characters in Romance Land these days. Fire Inside gets a C+ from me.