I was one of many readers impressed with the first novel in your "Ice" series, Black Ice. I sometimes have problems with the power differential between your heroes and heroines, and though Black Ice was no different in that respect, the hero and heroine were nonetheless compelling, as was their relationship. 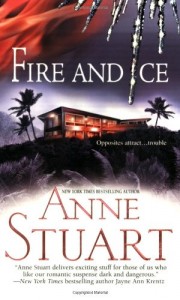 The next two books in the series, unfortunately, felt like a bit of a retread of that same dynamic: ruthless, uber-competent hero and helpless, constantly-in-peril heroine. Still, I looked forward to the fourth book, which would feature a heroine who could not help but be kick-ass: Isobel, head of The Committee, the mysterious group of spies and killers that the heroes of the previous books all belonged to.

Unfortunately, I was destined for disappointment – Isobel was completely defanged in Ice Storm. Not only was she paired with a hero that constantly had the upper hand, but in the end the reader found out that (SPOILER) (/SPOILER). Though the book was not bad, this characterization of Isobel was extremely frustrating.

Still, knowing that it was the last book in the series, I did not have any real qualms about picking up Fire and Ice. I like to finish series if possible, and I liked what I’d seen of Reno and Jilly in previous books well enough. I talked in a previous review about "readability", and your romantic suspense books definitely fall under the category of romances that are easy to read, even if the stories themselves have flaws. They are fast-paced and generally easy reads, which is sometimes just what the doctor ordered.

Janine provides an excellent plot synopsis of Fire and Ice here. That leaves me free for the kvetching. My main problem with this book was how repetitive it felt. The bulk of the story went something like this: 1) Jilly thinks about how Reno could never, ever be attracted to her; 2) Reno thinks about how attracted he is to Jilly, but how he doesn’t intend to do anything about it, because he promised Taka and Summer he wouldn’t touch Jilly; 3) their musings are interrupted by bad guys; 4) Reno dispatches the bad guys; 5) Reno steals a car; 6) Reno drives said stolen car too fast and Jilly complains and/or fears for her safety; 7) Reno and Jilly find a temporary safe haven; 8) Jilly whines about how hungry she is; 9) Reno feeds Jilly and then it’s time for 1) again. I think this whole cycle occurred at least three or four times over in the course of the book.

Additionally, while in theory I appreciated the unusual setting of Japan, in practice I felt that it was largely wasted; the Japan of this book felt very cartoonish and superficial to me. Yakuza gangsters (I’ll give you credit for admitting in the foreword that their portrayal was probably not accurate), capsule hotels – I guess I should be grateful you didn’t throw in a geisha or some Harajuku girls at some point.

Similarly, the culture clash between Reno and Jilly was too broadly drawn, at times distastefully so. He calls her gaijin constantly (which I understand is a slur; how serious of one seems to be a matter of debate among the various websites I checked out); she, upon seeing his penis, remarks that she thought Japanese men were supposed to be "small". Ew. Even if this intended to be tongue-in-cheek, it’s a rather offensive stereotype.

Less serious to me, but still annoying, were some of the points used to illustrate that Jilly was a fish out of water in Japan. I don’t doubt that some of the food common there would be unfamiliar to her, but somehow I think a Southern California movie star’s daughter would’ve had miso soup and sashimi before. I won’t eat fish cooked, much less raw, but I have heard of sushi, even seen it on occasion (my go-to dish in Japanese restaurants? Chicken katsu. You can’t go wrong with breaded, fried chicken, IMO).

Finally, several times Reno expresses his hatred for American women, which I found a little off-putting. I can’t imagine Jilly stating repeatedly that she hated Japanese men, but I guess the gender and cultural differences are supposed to make it okay?

When we find out the reason for Reno’s implacable hatred (if there can be a reason for hating a whole countryful of people), it is stupid and clichéd in the "one woman did me wrong, and so they’re all rotten" tradition. It’s also given short shrift as a plot point; his reason is brought up and then it’s never mentioned again, or resolved in any way.

I won’t complain too much about Reno treating Jilly like crap, because I think most readers pick up an Anne Stuart book expecting that dynamic between the hero and heroine. In that respect, actually, Reno is perhaps slightly less of an ass than the usual Stuart hero, which was perhaps appropriate give the fact that Reno and Jilly are somewhat younger than the couples in the previous books in the series. He’s not quite as hard as the previous heroes, and seeing 20-year-old Jilly matched with one of those ultra-ruthless men probably would’ve been hard to take.

I also won’t complain about Jilly’s supposed brilliance not being much in evidence; all my bile in regards to heroines promising character traits and not delivering is still tied up in Isobel of Ice Storm (hi, my name is Jennie, and, yes, I am bitter; why do you ask?).

I will give you credit for creating a truly unique and mostly appealing hero – I wouldn’t want to read about 20-something Japanese tattooed punks every day, but Reno made a nice change of pace. And I’ll reiterate that Fire and Ice is quite readable; it didn’t drag for me or even bore me (in spite of my complaints about repetitiveness). But I’m still only giving it a C+.