I’ve been interested in reading your work since I selected your short, Caged, to appear in the Agony / Ecstasy anthology. I tried one of your previous works (the name of which escapes me) and it didn’t work for me. I can’t remember the title or if I even finished it so unfortunately I can’t help the readership out here. “Falling Hard” did work, with some provisos. I found the paranormal world to be slightly different than ones I had read in the past. 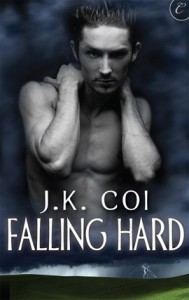 Amelia is an angel and she has watched over Gabriel Gunn for years. When Gabriel’s life is seriously endangered, Amelia must leave her angelic plane and enter the mortal one. As an angel, she has no feelings and her life force is renewed regularly by the angel songs of those around her. As a mortal, however, she is inundated with feelings and her life force slowly seeps away.

Gabriel is a recovering drug addict who has no idea why his manager is dead and he has narrowly escaped mortal wounding himself. Gabriel has Lucifer, the leader of the fallen angels, inside of him. A set of rogue angels is desirous of setting Lucifer free and if this should be a possibility, Amelia must kill Gabriel because Lucifer desires to gain access to the heavens and wrest control from the Father.

The lines between good and bad begin to get blurred for Amelia as her blind faith in the orders from the Father and his Archangels are questioned on Earth. Does Gabriel have to be killed? Can Lucifer be contained? Should angels have free will or is it right for them to be bound by duty to the Father?

It seemed odd that someone who has a dangerous and evil being inside of him is so unrelentingly good in the story. I mean, yes, he has a temper but I felt like his poor attitude toward Amelia was understandable given that he had lost his closest friend and was falling in love with someone who refuses to explain all the weird stuff that swirls around her. He’s incredibly patient, to the point of unbelievability at times as he accepts that explanations will come later, even when later arrives and explanations aren’t forthcoming.

Amelia’s acceptance of emotion seem too quick. If she truly was unfeeling on her angel plane, then one would think the onslaught of emotions would have had a more serious effect yet she accepts these changes with aplomb and almost eagerness, particularly the near instantaneous attraction to Gabriel. Yet, at another time, she is confused about how a man looks at Gabriel as unsavory. (She has watched over Gabriel for almost thirty years and should have been aware of this by now)

He sighed. “He didn’t like the way I look and made assumptions about my character because of it.”

“And do you experience such a reaction often because of the way you…look?” She studied him with that focused regard he was coming to recognize as her curious look—although she would, of course, deny feeling anything so base as curiosity.

Despite this, the use of music in this book to create foundations for the worldbuilding was different.* Both Gabriel and Amelia have found surcease in music. It was his escape and release. It is her life force. Gabriel is a sweet hero who has tried to save and protect those that he loved and when he failed, he sought oblivion in drugs and alcohol and then he turned his life around again. Amelia’s angel characterization may not have been wholly consistent but it was nice to see a woman in the warrior mode. Amelia “The Avenger” is a nice and welcome twist. The two shared great sexual chemistry. The outcome of the story was different than I had expected but not in a negative way. I’ll be reading the next in the series. C+

*Yes, I have read the Archangel series by Sharon Shinn but while they both have angels and music, the feel of the stories and the worldbuilding is completely different.