REVIEW: Faking It by Cora Carmack 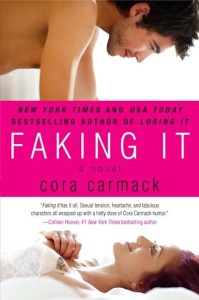 Your first book, Losing It, didn’t work for me at all. It was a combination of the character pairing (professor + student) and the plot (she’s a virgin).  Faking It worked a lot better.

Cade Winston is still reeling from his unrequited love interest turning to another man when  he receives a bizarre request at a local café. Mackenzie Miller needs and “sweet and nice” boyfriend to show off to her parents instead of the tattooed bad boy she’s been keeping company with.  Cade fits the bill. Cade is an aspiring actor and he plays the sweet and nice boyfriend role a little too well.

My father shook his hand and said, “Really?”

They’d already married me off.

Mackenzie’s voice was so relatable as a young woman at odds with her family.  She loved them, but she wasn’t living up to her parents’ expectations and they were too uptight and crazy for her. Cade, however, had managed in lest than fifteen minutes to completely win them over.  Thus, the charade had to continue.  The setup was cute and believable.  “In the war for my parents’ approval, I’d lost to a complete stranger.”

But. God, there is always a but isn’t there?  The first chapter is told from Cade’s  point of view and he spent the whole time for mourning the loss of his love.   It was hard, as a reader, to immediately switch focus from the one that got away to Max (Mackenzie).  The first 20% of the book is that tiny window of time between Cade being struck with the news that his love was getting engaged to someone else and meeting Max.  I would have liked to have had some internal monologue helping me to ease the transition.  Later in the book, Bliss, the object of unrequited love, reappears and Cade still has some residual feelings for her which is perfectly normal and understandable. It’s just that this inhibited my buying into the HEA.

If the entire book could have been as fun and cute as the cafe, I would have  been in heaven.  However, Cade is challenged by his Hispanic sidekick, Milo, to get laid because Milo is tired of Cade’s depressed act. What is wrong with Cade and Milo going to the bar, finding Max singing with her band, and Cade taking her home without having his manhood challenged?

But every time I found myself mildly annoyed, I was refreshed by the gender reversal. Cade’s more straight laced (but not uptight) good guy portrayal juxtaposed against Max’s tattooed bad girl act was fun and different.  Max was often lusting after Cade, trying to suppress her hormones and her instinct to jump his bones.

The familial interaction that annoyed Max and enticed Cade highlighted not only their differences, but their losses.  Cade was hungry for parental interest and being part of a family unit whereas the family unit represented pain and produced anger in Max.  The scenes with Max’s parents provided both a source of conflict between Cade and Max and also were the stage for the funniest moments.  Cade was “Golden Boy” because he tries to be so perfect all the time and Max was “Angry Girl” because she tried to piss the most people off with the least amount of effort.

The book was most successful at its lighthearted moments although I fully bought into Cade’s bittersweet feelings toward Bliss and moving on.  Max’s dark moments came off more forced.  The tragedy of her past seemed pasted on and all too obvious.  Those complaints aside, this was a much stronger entry for me than the first in the “It” series and I’d definitely read another. C+