I read book one in the series and didn’t love it so I skipped the second, but I think you may have hauled me back into the fold with this one. The two characters are at daggers drawn (to use an old fashioned phrase) because the hero is destined to be a Breed Male which means he can have no mate. The heroine has no mate either but has faked a mate sign through a tattoo of sorts with another vampire who had lost his true mate. 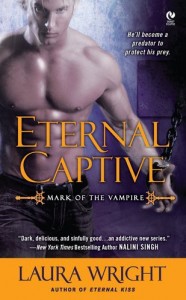 There is a lot going on here with mutores (shapeshifting vampires), lost mates, Breed Males, veannas, and so forth. Rant on – I think that there are a number of made up words that you use to imbue ambience but seem completely unnecessary. This isn’t a problem unique to your book but an epidemic in paranormal romances. For instance, why virgini for virgin but not principessa instead of princess. Or why use flash to describe vampires moving from one location to another instantly instead of flashini or some made up noun for any other random noun. It’s one thing to use made up terms to describe nouns/verbs that are specific to the world that you are creating. That seems like real worldbuilding. It’s another thing to use special made up terms for random nouns or verbs that you pick and choose. That seems like hokey and ineffective worldbuilding. – Rant off.

Back to the book. Bronwyn Kettler, a genetic scientist studying the Breeding Male phenomenon, accidentally fed from Lucian Roman but that one bite has bound her too him more securely than any human bonds. “In consuming his blood she had consumed his very soul and now—every day, every moment he existed, she moved inside him, her unending hunger deafening as she searched and slithered through his veins, circled his muscles, squeezed until his brain threatened to explode.” Neither of them want this which is what makes this mate book different. Bronwyn intends to proceed with the Veracou, a binding ceremony with another vampire. Lucien has only two choices, to “fuck her or kill her.” Sex with Bronwyn would turn Lucian into a “Breeding Male” which is essentially a vampire who does nothing but rut “a rutting animal with no conscience, no control, only a hunger to claim.” Killing her, well, obviously, that’s not a solution either. Regardless of the Sophie’s Choice presented, Lucian’s blood drives him to essentially stalk Bronwyn.

Brownyn feels Lucian too and has chosen to go through with the Veracou in hopes that the mating ceremony with another vampire will break the compulsion and need she has for Lucian. Yet the Veracou with her good friend, Synjon Wise, does not have the desired effect. Synjon goes into the bonding ceremony willingly because his heart died when his true mate’s life was extinguished.

The stakes are sufficiently high for me from the very opening of the book. When the book focuses on this struggle to not mate, it is at its best. The emotion rings true and is further heightened when Bronwyn and Lucian begin to have tender feelings toward each other and want to consummate their relationship but cannot because of the threat of Lucian turning into a Breeding Male. Knowing that the story ends happily diminishes some of the tension but what keeps the pages turning is guessing what will solve the Breeding Male problem. Sadly, I felt that the answer was a cop out, very Andromeda Strain, if you will.

Where the book falls off the rails is its tendency toward overdramatization, even though that is another hallmark of PNR. I do feel that there is a need to either go big or go home in paranormals, but sometimes it can be taken too far. The description of Synjon is a perfect example.

. Nicknamed the ghost, the only vampire paven to ever serve as both an elite Special Forces officer in his native Britain and as an American Navy SEAL regarded his current existence as a spy, an assassin, and a bounty hunter for the Eternal Order as bloody perfection

It is not enough for Synjon Wise (which somehow changed into Samwise in my head) to excel in country’s elite military arm, but two country’s. Why stop at two? Why not have him be part of every elite military arm? What kind of slacker is he?

Another part of the story focuses on Cruen, a mad vampire scientist who has been creating mutores. (If this reminds people of Lara Adrian’s stories, it did me as well). Cruen abduct Bronwyn in order to lure Lucian to him. The two will breed and Cruen will embark on the next step of his King of the World plan.

Despite the villain, the questionable made up word choice, and unnecessary over the top descriptions, I found the story angsty and compelling with just the right amount of humor. Lucian and Synjon’s testosterone (or testesteroni?) driven fights made me smirk. Don’t we all love a good alpha male throw down? (I always envision them wrestling in jello and accidentally touching each other, don’t you?)

“Blood!” Lucian said the word, rising from his seat and pointing at Synjon.

“You and Bronwyn have mated,” Lucian said, his tone threaded with disgust. “Have had your Veracou.”

“Yes. Do you have a point, or are you just reminding yourself that I am Bron’s mate?”

Lucian ignored the barb. “You should be able to find her, track her, know where her blood is. Isn’t that right, Alexander?”

Alexander nodded, his eyes suddenly graying over with thought. “It is.”

“There’s no need for any of this,” Lucian said, his voice rising, his fangs dropping. “Let’s go. Let’s go and get her.”

But Synjon didn’t move. “Stay where you are, Frosty. I haven’t taken her blood. She was nicked from me before we could have our consummation, both in blood and in body.”

Despite the problems, I was engaged the entire time and I certainly want to read more about poor Synjon and the mutores. The story was very sexy and that aspect of the book worked well. New readers likely could start with this entry into the series. I didn’t read book two and I barely recall book one. While “Eternal Captive” doesn’t break new ground, the emotional strength of the story elevated this above other paranormals I’ve read of late. C+