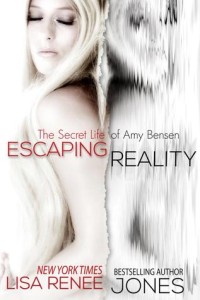 I’ve never read one of your books before, but the fact that you have a reclusive billionaire as your hero was enough to sell me giving your book a try. Amy is at a work function in New York when she receives word from a man she knows only as her “handler” that she must leave New York immediately. She’s to go to the airport, find locker 111, retrieve that package of materials, which has new identification for her, and learn her new biography. She’s moving on from her life in New York and must do it post haste.

When she arrives at the airport, she finds that there is no record of her name on the flight manifest due to some sort of mistake by the airline. Fortuitously she is upgraded to first class and finds herself sitting next to a remarkably handsome man. He is Liam Stone, child prodigy architect and reclusive billionaire. They strike up a stilted conversation (Amy trusts no one at all) and Amy soon falls asleep. When she wakes up screaming, Liam soothes her. He discovers that Amy regularly suffers from nightmares and that she won’t talk about why. He immediately understands that she is fleeing something or someone, which in turn, brings out his protective instincts. When they disembark from the plane, Liam offers Amy a ride to her new apartment. Amy is deeply reluctant to accept help from anyone, but particularly Liam, who for reasons she doesn’t trust, makes her feel safe and cared for, emotions that have never gotten her anything but heartache in the past. Nevertheless, she allows Liam to take her to her new apartment, while she feeds him her story that she’s come to work on short term assignment for a real estate company. But when Liam walks into her sparsely decorated apartment, his protective instincts fire, despite Amy’s protests that her belongings will arrive in the morning (which is, of course, a lie). For reasons that surpass her understanding, Amy is inclined to trust Liam. He wants to possess and protect her, and for some reason, she keeps letting him. She doesn’t want his money, has no interest in the material goods he can give her, but she’s desperate for the safety she feels she has when she’s around him. Liam wants to build a future with Amy, so he works slowly on building her trust. Offering her glimpses into his past, and waiting for her to be able to offer him some inkling of what she’s running from.

Yeah, I know how Liam feels. I read the entire book and STILL have no idea what Amy is running from. While I thought that the writing was strong, and I liked the connection between the characters, I’m mystified as to what happened in her past to put her on the run, who her secret benefactor is, or what happened to her family. It’s a strangely written book, with Amy being a very unreliable narrator because the reader knows as little about her as Liam does. And the reader never learns more. There are little drips and drabs of her history, mostly told through flashbacks and panic attacks, all of which seemed unreliable to me, given her completely traumatized state throughout the book. On top of that, she’s wildly moody, as I suppose one would be when one is constantly on the run and so distrustful of anyone. But it made it very difficult for me to connect with her point of view, given that I didn’t believe most of what she saw or heard. I believed her reactions, but felt like they were coming from such a place of trauma, it was very difficult to have any faith in the way the story was unfolding before her.

That being said, I think that there are strong bones there. The writing is extremely solid. The sex is plentiful and hot. And Liam, despite being damaged himself is a really charming hero. He’s taciturn and difficult and moody himself, and deeply possessive of Amy. But it’s clear from the start that he’s interested, and then entranced by her and his emotions are very real for her. It made me like him a great deal. On top of that, the book ends in a cliff hanger. A BIG one, so I’m not sure it’s going to be for all readers. As for myself, despite myriad misgivings, I’ve got to see what happens next. I just hope that you provide a fulfilling and understandable backstory for Amy, because right now, I have a hard time believing her view point at all. Final grade: C+