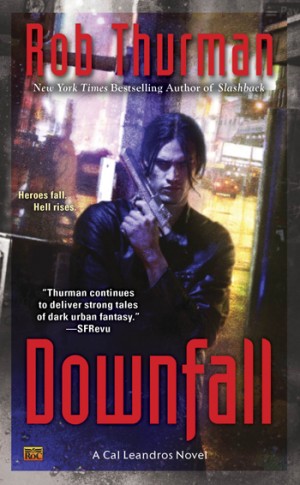 I’ve read your Cal Leandros books since they first started coming out. It’s been a ride. I can’t believe we’re already on book 9! It’s rare that I stick with a series this long. In many ways Downfall feels like the end of the series — it’s not (I think there are a couple more books slated to come), but if someone wanted to say goodbye to the series, this would be a good place.

(Note: This far into the series, I can’t talk about anything without spoilers so I apologize for that.)

Downfall splits the narrative between Cal and Robin. As we learned earlier in the series, Cal and his brother, Niko, have reincarnated throughout time and Robin has the (mis)fortune to know them in all their previous incarnation. I say misfortune because the boys have a thing about dying young and badly. Readers can probably guess where I’m going with this — the time to collect has come.

Cal’s half-Auphe side has finally won the battle within him. It’s starting to come out. Cal’s hair starts turning white. His eyes start turning red. His already shaky moral compass becomes shakier. To make matters worse, the Vigil is determined to assassinate him. His ex-girlfriend, Delilah, now controls all of the werewolves in NYC. And his brother, Grimm, isn’t done with him. Suffice it to say, the cards are stacked against him.

Now Robin, who recognizes the signs and knows that the brothers’ end is near, isn’t willing to let them die without a fight. He’s tried to save their past incarnations without much success but this time is going to be different. Why? Because he’s done with them trying to save themselves. They obviously suck at it (no kidding) so he’s going to have to do all the heavy lifting. So he does.

I think the reason why Downfall has a sense of finality around it is because it refers to a lot of things that have happened in the brothers’ pasts. Previous books, previous encounters, familiar faces reappear (George!), all of that. It’s not that things get tied together into a tidy bow because they don’t, but it seemed like things had come full circle. This isn’t a criticism, but it’s an observation. I can tell there are still options to explore in future books, but they almost seem anti-climactic after this one.

Robin’s always been once of my favorite characters, so I was glad to see him get more attention. I also liked the glimpse into his relationship with Ishiah. I laughed at the thought of this angel not knowing what to do about this puck who lusted after him, then “watching out for him” (yeah, okay, Ishiah, talk about self-delusion), and then when he fell/retired/whatever, ended up with said puck — who then proceeded to thoroughly corrupt him. It’s epic, and I love that. Even if Ishiah did a shitty thing to the boys when they were younger.

On the other hand, I normally associate this series with energy and over the top emotion (which I like) and, in my opinion, both were missing here. Downfall is more introspective than previous installments and for me, that made it easy to stop reading and put down. I obviously finished the book, but it had a different tone and I think that is partly what contributes to the “final book” feel.

One thing I keenly felt in Downfall is a lack of major female characters. I get it. The series is about the brothers and Robin, and the focus should be on them. But I felt like women were more prominent in previous books so the cameo from Delilah and her Lupa pack and a phone call from a certain psychic didn’t feel like enough.

I wouldn’t say I was let down by this book exactly, but I’m not sure I got the Cal Leandros experience I’ve come to expect. Maybe I need more time to process. I did love Robin in this book though. C+

→ Jia
Previous article: Thursday News: The Author Edition
Next Post: $25 Visa Giftcard & Book Giveaway: This is Where I Leave You