REVIEW: Down on Her Knees by Christine Bell 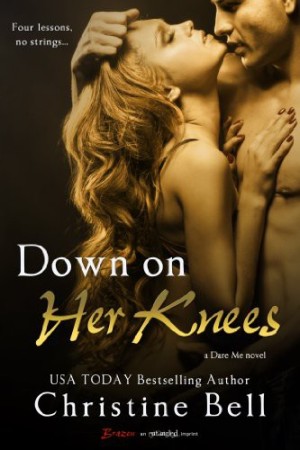 I requested this book via NetGalley. I know I’ve read you before and I think I’ve even read books in this series before but I didn’t have a strong recollection of the previous two couples referenced in the book so for newbies, I don’t think you have to read the previous Bell books to enjoy this one.

The best part of the story was the steamy sex scenes. The attraction, the description of the love scenes, the commanding role played by Rafe all worked for me.

He pushed back his chair and stood. “Now, if you’re through grilling me about my sexual practices, which you have no understanding or knowledge of, then I’m going to get myself a drink. Unless what you’re really asking for is a lesson? In which case”—he glanced at his watch and then locked gazes with her—“you can pick up that hood and those cuffs”—he jerked his head toward the bachelorette party props—“and I’d be glad to take you outside in the alley and give you the best ten minutes of your life.”

She stuttered and her whole body went white-hot, but she managed a tight smile and a damned good response. “As tempting as that is, if ten minutes is all you’ve got in you, I think I’ll pass.

I thought the Courtney’s conflict was interesting. She was intrigued by Rafe’s sexuality and his promise of satisfaction in the bedroom but she was fresh off a bad relationship where she discovered, too late, that her boyfriend was controlling every aspect of her life. It happened slowly until she woke up one day and realized she had to ask permission to get groceries and she’d lost contact with all her friends due to subtle interference from her ex. She broke it off and moved to Rhode Island where she made new friends and Rafe was part of the circle of new friends. They meet, sparks fly but Courtney is reluctant until finally she gives in.

They have constant interaction with each other due to the large circle of friends. One thing that bothered me is that neither addressed how weird it would be to have a fling with each other and remain friends.  They discussed how weird it was that there was this simmering sexual tension between them but not what would happen with the friendship dynamic after the fling burned itself out. Given that Courtney’s new circle of friends was really important to her, I didn’t understand why this wasn’t of greater concern.

The other thing that bothered me was Rafe’s emotional state of mind. Rafe lost his lover to a liquor store robbery gone wrong. He quit college and pursued a law enforcement position, dedicating himself to chasing bad guys. As one of Courtney’s friend’s said “His whole career is a tribute to Monica.”  At the beginning of the book, even the sound of Monica’s name is too painful for Rafe to endure. He has a strict four scene rule and won’t go beyond that with any woman.  Of course, he breaks all his rules for Courtney.  At the end of the short book, he’s fully recovered from his grief. I didn’t find that particularly believable either.

I find this to be the case with many Brazen books. The format is for a short category – around fifty thousand words – yet too often deep and traumatic issues are central to the character storyline which would be fine but the sex scenes take up about thirty thousand words and thinking about sex take up another ten. There’s just not enough time devoted to the serious issues raised at the beginning of the story and thus the ending isn’t as satisfying.

I also found Rafe the dom to be rather vanilla. The “scenes” he carries out with Courtney are tame and he just came across as bossy in the bedroom rather than a true dom.  It worked for both of them and I could have believed in the HEA so much more if it weren’t for the fact that Rafe went from grief to love faster than it takes a Ferrari to get from parked to sixty. C+