REVIEW: Did You Miss Me? by Karen Rose

In “Did You Miss Me?” part of the reason the romance works is because the characters have had unrequited feelings for each other prior to the start of the book.  The romance in the story basically consists of coming to an understanding of those feelings so that the romance can swim underneath the layer of suspense.  It works, but the suspense portion is the primary driver of the story.  The problem with the romance that had developed previously was that I could not recall the previous appearances of Joe and Daphne and felt like I had missed some of the romance already in progress.  Maybe I needed a “story so far” recap at the beginning. 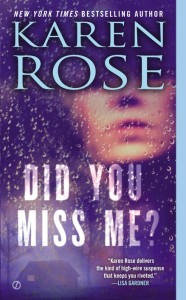 Joseph Carter lost his wife on his honeymoon and for ten years he’s been dead until the moment than he spied Daphne Montgomery, assistant State’s Attorney. He watched her, quietly befriending her, and agreeing to a position that would allow him to be more in and around Baltimore. He did not, however, declare his feelings, ask her out or in any way convey to her that he was interested in her.  Now he believes that she is dating Baltimore private investigator, Clay Maynard.

When Daphne’s son is kidnapped and a cop aka bodyguard is killed, Joseph gets to play hero to Daphne. During the investigation, his feelings for Daphne are revealed.

I struggled in the beginning to keep track of everyone. There was a huge cast of characters. Daphne had a 20 year old son. The son had a girlfriend. The girlfriend had a sister. Daphne had a mother and a nanny. She also had two male father figures, one a former bodyguard of hers and another horse trainer. There is Clay Maynard, the PI, and his motley crew along with his own romantic interest. We also have Daphne’s boss, Grayson and his fiance, and so forth.

Because of the large cast of characters, it was difficult to keep track of everyone. Further, there are multiple points of view: Ford, the son; Daphne; Joseph; Clay; and the villain.  Further, Daphne was one of those characters whom couldn’t be tortured enough. Not only is she the subject of some villain’s evil focus, but her past is littered with tragedy including seeing a cousin raped, enduring a kidnapping, having her son kidnapped, and so forth.

While we know from the beginning there is a deep game being played by the villain, there was an overwhelming number of events taking place. The villain was so smart and savvy, but at one point he just kind of allows a core bit of his plan to be eroded. I thought the whodonit portion was well disguised and I vacillated back and forth as to who was the unnamed villain.   It kind of became crazed at the end and I felt like Daphne’s worst fear was never addressed.

I noticed some of the reviews complained about the overly sexual nature of the book but nothing of the sort registered for me.  I thought the romance was understated and given that Daphne’s son was kidnapped, any overt romance would have registered as discomfiting.  I thought the sex scenes that were included were tasteful and represented a level of comfort rather than crazy passion.

→ Jane
Previous article: When we defend romance reading as escapism, the critics win
Next Post: REVIEW: Rush (The Breathless Trilogy) by Maya Banks