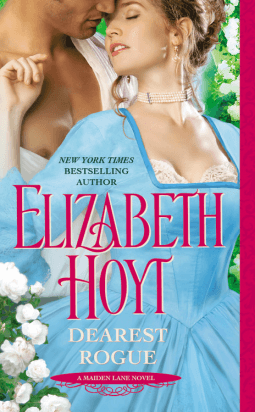 HE CAN GUARD HER

Lady Phoebe Batten is pretty, vivacious, and yearning for a social life befitting the sister of a powerful duke. But because she is almost completely blind, her overprotective brother insists that she have an armed bodyguard by her side at all times-the very irritating Captain Trevillion.

Captain James Trevillion is proud, brooding, and cursed with a leg injury from his service in the King’s dragoons. Yet he can still shoot and ride like the devil, so watching over the distracting Lady Phoebe should be no problem at all-until she’s targeted by kidnappers.

Caught in a deadly web of deceit, James must risk life and limb to save his charge from the lowest of cads-one who would force Lady Phoebe into a loveless marriage. But while they’re confined to close quarters for her safekeeping, Phoebe begins to see the tender man beneath the soldier’s hard exterior . . . and the possibility of a life-and love-she never imagined possible.

My it’s been a while since the last time I read one of your books. I kept getting further and further behind on this series until I finally decided just to dive in with this one and see how it went. I think newbies can start with this book without any of the background leading up to these two together as it yields a dynamic opening scene and intrigues me with the possibilities of how these two will relate to each other as the story continues.

It opens in media res with the hero in place and doing his protective bit. He might be a wounded veteran but he’s also a man of action. Phoebe twits him a bit to be sure he’s really listening even as he swings into gear with pistols drawn and not just absentmindedly “yes, ladying” her.

Phoebe might be an aristocrat and gently bred woman but she seems calm, cool and collected in the face of danger. In fact quite a match for Trevillion. She thinks he doesn’t like her while he keeps his thoughts to himself and is a bit nonplussed at the way she laughs at danger. And he lurves her madly though he would die a thousand deaths rather than her know it. Silly man

She experiences the world as it is for her now through touch, sound, smell and feel. Her garden is her fragrant delight. Her brother smothers but others don’t seem to … too much. Trevillion usually doesn’t though it takes even him a while to see that to her being caged with cotton wool and kindness is like being in prison. Unfortunately there is a reference later in the book when he thinks how brave she is in her desire to put herself out there in the world and not cower safely at home. But he’s generally the one to sniff at others for treating her as less than capable.

Phoebe does have a point that in any other circumstances Trevillion being in her presence, alone, would be scandalous. Society views her as neutered by her blindness which irritates her to no end. She wants a regular life, she wants suitors and a season, marriage and a family. She does do well in her efforts to move through life as a sighted person would with her biggest regret being not having the advantage of seeing facial expressions.

Though Trevillion has guarded her for six months, Phoebe has learned little about him. This is reasonable at the start of their relationship since she wasn’t happy about needing a bodyguard but I wondered why, after a while, she hadn’t asked him questions about his background and life before. Oh, the plot and we need to know, that’s why.

Since this is the seventh book in this series, we get a quick rundown of past couples, hints at happiness and fecundity but for the most part I found I could read about them and then they could be easily set to the side as the plot moved on.

James has a real issue with self confidence. Phoebe is going to push that to the wall. She is aware of her limitations as well as what others see as her limitations and chafes at both of them. Yet she’s not Perky Polly and has moments of anger at her situation and despair at her future. I can’t blame Phoebe for finally rebelling against Maximus’s overprotection though her outpouring of rage is going to be a thing of family legend in years to come. “Do you remember the night Phoebe finally let loose?”

James is so hopelessly, completely in love with her. Phoebe initially views him as a hindrance to living her life freely but in many ways, they are similar. Both are restricted and have found disappointment in their lot. He hated the thought of joining the army though came to find peace with it and enjoyment of a job well done. Having to leave it and dealing now with a lame leg and pain from it constricts him and his options. She has had to come to terms with her slow loss of sight. Now she’s kept in swaddling wool by brother and at times sees James as a jailor more than a helper or even a friend.

He uses his military training and intelligence to work out who is behind the kidnapping efforts to get Phoebe. And also realizes he’s let himself get too close, lose his edge in trying to go along with outings to make her happy. He’s too damn noble. As I read on, I hoped that Phoebe would do something about that – as she seemed the type who would and could.

The tension that’s been building between Phoebe and Trevillion finally erupts during their flight from London and after they reach safety. Phoebe gets a chance to learn all about James’s past and help him reconnect with those who love him. The promise of the passion that her sexy application of scent to James hinted at is unleashed – at least after Phoebe convinces James that she doesn’t see him as just a plaything for a titled woman. Bravo for him for standing up for himself.

Meanwhile, the conflict from the first 2/5 of the book is waiting to be resolved. At first, it seemed too easy, too pat. All that effort got put into kidnapping Phoebe and it’s wrapped up that quickly and off scene? I didn’t buy it and it turned out not to be quite the end of the issue. Yet the truth behind all of it seemed to be just as unsatisfactory. Suddenly Phoebe’s back in danger and my first thought was, “she’s been taken – again??” ::Eye roll:: The ultimate resolution of the villain was more slapstick-ish WTF and not just in my opinion. Even Phoebe’s brother and James are nonplussed by it. “You?? But why?” The excuse seems more petulant than reasonable.

I enjoyed watching Phoebe and James move past their initially shown prickly relationship. Seeing Phoebe work on breaking down James’s defenses was fun while her realization of him as a man to love rather than just a sexy beast to experiment on is heartening. He, of course, already loved her almost beyond reason. But the damp fizzle behind the whole “Who’s after Phoebe?” plotline was a disappointment. C+