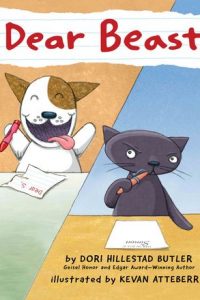 Simon has taken care of his owner, Andy, for many years. He’s a good cat. Clean, responsible, and loyal. What more could a boy want? Even when Andy’s dad moves out, Simon is certain that Andy doesn’t need another pet. So why would Andy’s dad adopt a DOG?! To make matters worse, the animal is a rude, rowdy troublemaker.

Simon’s job is clear: the beast has got to go. He decides to write him a letter. Strongly worded, of course. But when the dog’s response sets off an unexpected correspondence, Simon realizes the beast may be here to stay. Can he make room for another pet in Andy’s life? 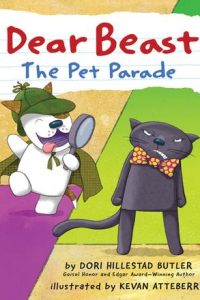 A snobby cat and a good-natured dog fight over the chance to dress up with their owner in this playful illustrated chapter book series told in letters.

It’s time for the annual city pet parade! Only one pet can win first place . . . Simon the cat has always hated wearing costumes, so he decides it’s okay for Andy’s new dog, Baxter, to march with Andy instead. This way, Simon gets to avoid a costume and keep his dignity.

But when Baxter keeps the costume plans a secret, Simon changes his mind. His boy Andy needs him! Who knows what trouble Baxter is up to? That beast can’t be trusted—and it’s Simon’s job to save the day 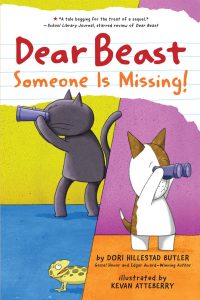 Who says cats and dogs don’t get along? A snobby cat and a good-natured dog team up—sort of—to solve the mystery of a missing classroom pet in this playful illustrated chapter book told in letters.

Simon the cat and Baxter the dog have finally learned how to share their owner, Andy. It helps that Simon lives with Andy’s mom and Baxter lives with Andy’s dad. When a problem comes up, they simply exchange letters to sort it out. Baxter’s spelling has even improved…though not by much.

But then Andy’s class pet goes missing, which causes an argument with his friend Noah. Andy is so, so sad. Both Simon and Baxter want to solve the mystery and make Andy happy again. Which pet will collect the clues and piece together the solution?

Meet Simon (a cat) and the Beast (aka Baxter the dog). Simon and Baxter share Andy, a little boy whose parents have separated. Simon lives with Andy’s mom while Andy’s dad got Baxter to live at his house for when Andy is there. Oh, and Bubbles the fish is there, too, as she and Simon don’t get along very well after Simon tried to eat her out of her bowl.

Then came the pet parade – or purrade as Baxter spells it. Simon has never enjoyed being dressed up in a costume (a taco, really??) to march with Andy but Simon’s competitive juices get flowing when he realizes that this is the last year Andy can march and he really wants his boy to beat Sophie and the Terrier Twins. Will Baxter listen to Simon’s instructions to wear his costume well? Simon, here’s a hint – Baxter knows what’s really important about the purrade.

Finally Simon and the Beast must work to discover what happened to Andy’s class pet. Andy’s depressed that his best friend Noah thinks Andy left the cage door open and Simon’s upset that because Andy’s upset he isn’t getting fed or his litter box cleaned. Who will be the hero to save the day?

I like (though don’t love) these books but there are a few issues. Andy is White while his best friend Noah is Black. In the first book at one point, Andy is called “A Man” while Noah is called “N Man.” Um, just no. I’m flummoxed and appalled that this made it past an editor. In the third book, children reading the book might get concerned about a few characters who appear to be in danger.

Of course I don’t think that Simon “gets” that Baxter intentionally misspells words just to get on Simon’s last nerve. And I wonder if Butler realizes that these misspellings make it harder for young and newly learning to read children to figure out how these words should actually be spelled. Also though these would be fun books to read aloud with different voices, the charm of Baxter’s fun with spelling would be lost.

Simon’s prickliness (which can be excessive) and Baxter’s obtuseness (ditto) tend to grate by the end of each book so I would recommend not reading them back-to-back-to-back. Still the way that Simon begins to soften a bit and become more accepting of the idea that Andy has enough love in his heart for both of them shows a way past jealousy and fear of rejection.

What I truly love are the illustrations which manage to convey the character’s feelings. I’ve read a few other books by Kevan Atteberry and have loved his “characters.” Sadly despite also loving how Simon and Baxter appear in these books, they aren’t going to become favorites of mine. C+