I enjoy romantic suspense but I like a good military romantic suspense primarily because other RS often rely upon serial killers for the suspense but the military setting or paramilitary setting is more action driven, less psychological.  I also like the camaraderie between the soldiers but rarely do we ever read about female soldiers.  I was excited to see that this series is about a number of females, at least a couple of them pilots, in a combat setting. 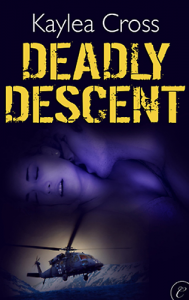 I had read an article back in 2006 about a female helicopter pilot in the Army so good that the troops nicknamed her “Saint”.  When I read about “Saint,” I thought she would be an incredible heroine for a romance story.  Five years later, Deadly Descent and its progeny aim to deliver on the female led military romantic suspense.  Hooah.

Captain Devon “Spike” Crawford lost her boyfriend Ty, an Air Force Pararescueman, during a failed mission in Afghanistan.  They hadn’t been dating a long time and Devon was ready to end the inappropriate relationship when Ty was deployed overseas.  She didn’t though and thus was still considered his girlfriend when he died.  Her lack of strong feelings for Ty coupled with his death and her involvement with him, fuels a strong sense of guilt.   Devon had also felt something toward Ty’s best friend Tech Sergeant Cam Munro.   Cam has always returned these feelings, although both never acted on them.  I felt a little uncomfortable at how the two of them reacted so strongly to each other directly after Ty’s funeral, particularly with Cam trying to ferret out the depth of Devon’s feelings for Ty, as if to measure whether he would have a chance later.  Perhaps for soldiers who are constantly in danger, living is done moment by moment.

The story fast forwards and puts us back at Bagram Airfield in Afghanistan where Cam is currently stationed and to where Devon is being deployed.   Devon flies BlackHawks on medevac missions.

The issue of Devon, an officer, having a relationship with an enlisted man, Cam, is addressed but it wasn’t really resolved well and I think individuals with a lot of military knowledge might be put off by this.  When Dev gets to the base in Afghanistan, she learns from one of the other female pilots that a female lieutenant has been brought up on fraternization charges.  For all their attempts to hide their relationship, it was fairly well known amongst their friends and things like that can’t stay secret.  Further, there was some implication that fraternization wasn’t an issue for the two of them when they weren’t deployed. My understanding is that fraternization is verboten regardless of whether the soldiers are deployed.

It may have been less of a problem because Devon was in the Army and Cam was in the Air Force, but that wasn’t addressed in the book so I don’t know.  While the fraternization issue was the basis of conflict for Devon and Cam, it was my least favorite part of the book.  I think it is because I know it is wrong, that it endangers both of their career advancements and even with the overt acknowledgement that they shouldn’t be doing this, it still seemed as if the book ignored the consequences, suggesting that marriage would solve any problem.   What’s possibly worse is that it appears future books in the series deals with the enlisted/officer pairing.

Having said that, while some of the narrative prose was a little rough, particularly in the transitions, the battle scenes were very exciting.  I don’t recall reading a military book that took place on an actual base other than maybe Linda Howard’s MacKenzie book.  The part of the story that took place on the base and in the rescue and war scenes  was vivid and fascinating.  I felt immersed in the action.  I loved how the women were portrayed as completely competent, involved in the rescuing instead of being rescued.  In large part, the prominence and importance of the role of women in this story; their friendships; their portrayal as capable soldiers, are what appealed to me the most and what sets this book apart.

I wasn’t sure if it was intentional messaging or part of the world building but there are several scenes from an Afghani militant’s point of view and through him we hear the opinions of an Afghan warlord.  The warlord expresses the belief that if they kill enough troops the US will withdraw and that will be a victory. The Afghani militant was a man set on revenge for the death of his brother. For romance readers, this story will sound very familiar. How often have we seen the hero have the very same mind set?  I liked that we saw both an extreme and dangerous viewpoint from the Aghanis but also one of a man driven from peace to revenge.  These are universal emotions.

I was a bit surprised at the way in which everyone on base seemed to accept Cam’s feelings for Dev and his near constant concern for her, particularly out in combat. I know that one of the arguments against women in combat is that the men will be overprotective of the women instead of treating her like any other soldier and thus weakening the whole unit. Cam’s actions didn’t put any one in danger as that isn’t how the story was written but it made me feel vaguely uncomfortable, as did Dev’s overt response to Cam being placed in danger. Wouldn’t she, of all people, understood his need and desire to save others?

While I had some problems with it, I did find the story to be very engaging and I am interested in reading more about the men and women at Bagram Airfield. I only hope that there aren’t too many more of the fraternization stories.  C+