This is a compelling but flawed post apocalypse/science fiction/suspense genre bender with a host of multicultural characters.  Unfortunately one race is singled out as the villains which made the entire story sit  uncomfortably around my shoulders. 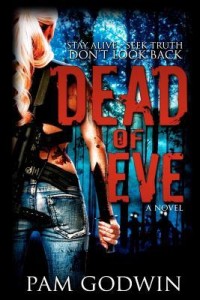 Eve was the mother of two and married to a gun dealer. A virus is released at the Denver International Airport by Muslim extremists which either kills the young and the old or turns the women into disease carrying beings which infect the able bodied men.

The story is told disjointedly and in short scenes, mostly action where Eve displays different abilities to survive and outwit the aphids. Complicating Eve’s existence is that she might be the last woman alive. This causes men to either want to rape her or kill her (due to their fear she is a disease bearer). Eve herself is beset with guilt for using her femininity to gain control over a situation or tools she will need for survival.

Eve is nearly super human. She can see the aphids whereas no one else can. She can move as fast as them. She sounds patterned after Linda Hamilton in The Terminator.  Her husband was a survivalist and trained with her regularly.

While there are romances that are in the story, this is not a romance and frankly I’m a little apprehensive about where the story is taking me.  Throughout the story, Eve acquires three men who love her, almost instantly, and want to protect her.  Their role in the future seems precarious and given the blithe way in which anyone other than Eve is maimed, tortured or killed, my guess is that a reader must take a George RR Martin view.  No one is safe.

One of the biggest problems in the storytelling was the disjointed nature of the narrative. We skip major scenes and some questions are often unanswered. Eve survives much in the way that a video game character does – by finding secret caches of food, goods, and other tools. Some scenes are simply glossed over like a 7 day voyage in a container across the Atlantic. Does she eat, piss, etc?  We then find out her vibrator still works, after nearly two years and a cross Atlantic trip in a container.  At the beginning of the book, they are using a magazine round a day to fend of the Aphids, yet later, she is able to go for days without shooting a gun or seeing an aphid.  The absence isn’t well explained.

Yay?  Eve has an excess of testosterone and it is speculated that her immunity to the virus that was spread is as a result of that.  Men are affected only through the exchange of fluids with women. But why she has an immunity that connects her with the mutants, called Aphids, isn’t explained.  A reader simply has to accept.

I was also quite baffled as to why Eve wanted to keep surviving. After the death of her children, her husband, repeated rapes, beatings, and torture, what is driving her?  Toward the end of the book, we gain glimpse of what higher purpose may exist but for a good half of the book, I’m not sure why Eve simply doesn’t gut herself.

And this is not a simple zombie story. There are dreamwalkers, spirit guides, scientific viruses, and unexplained messianic events. Oh and an evil Muslim who declares that what is happening is the will of Allah.  But despite the flaws and the unsettling racist overtones, it was compelling.  Without giving too much away, the manner in which the story crescendoes gives rise to a new danger and a new hope.  I’m not sure I’m on board for sequels because of my weak stomach and preference for happier endings but I’m not sorry I read this.  C+