In a sea of urban fantasies, paranormals, and dystopias, the young adult thriller-mystery never fails to stand out. At least it does to me. But I can’t help and wonder about the poor best friend in these books. Why are they always dead? Why is the friend who’s been left behind always so sure they can solve the mystery? Why are they sure there is a mystery? It’s one of those premises that works well in-world, while you’re reading the book, but when you stop to think about it, unravels. 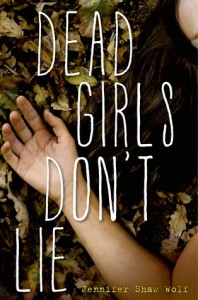 Jaycee and Rachel were the best of friends until one fateful night gave rise to secrets that eventually tore their friendship apart. Then one day Rachel is killed and now they can never reconcile. The police say the cause of death is gang-related but Jaycee can’t believe it. She received a cryptic text message from Rachel the night she died, and Jaycee’s positive it’s related to her murder. But when she begins to look into the last months of Rachel’s life, Jaycee discovers that they weren’t the only ones with secrets.

Let’s address the elephant in the room first. Dead Girls Don’t Lie takes place in a town that’s split along racial lines. There is a significant Latino population, many of whom work on the local farms. But when whispers of gang-related activity spread throughout town, guess who they point fingers at first?

While I thought the narrative did a clear job denouncing this sort of prejudiced thinking, once again I felt uncomfortable reading from the POV of a white girl tackling these issues. Jaycee very much read like a white girl unpacking her privilege (and doing a pretty good job of it, to be fair) and while that’s nice and everything, it’s not something I care to read about in fiction. I see enough of that every day on the internet. Toss in the facts that she’s a white girl solving the murder of her Latina best friend while enlisting the help of a Latino former gang member? Shades of white savior narratives and characters of color used as props and background “flavor.”

That said, I thought the portrayal of a town with deeply-seated prejudices and close-mindedness was spot on. Rachel was once a “good” girl. Then she changed her looks and started hanging out with the “wrong” people. In a larger city with a different community make-up, this would be ascribed to good old teenage rebellion. In their town, though, it was a sign that Rachel had gone down the wrong path, that it had all contributed to her death. There’s a lot of head shaking and tongue clucking. There is concern that Jaycee might be heading down the same path. I found this all to be very believable.

Speaking of Jaycee, it was interesting to read a character that came from a background that was both religious and conservative. I don’t mean this from a faith angle; I mean it from a cultural one. Jaycee doesn’t wear the trendiest clothes or sport the latest smartphone (or any smartphone, for that matter). This isn’t presented in the usual over the top “woe is me” sort of way you find in YA novels. It just is. Same with how the church plays a role in Jaycee’s life. It’s a social center where people congregate. It’s how couples often meet. I think this aspect of church life is often overlooked, and it was nice to see that portrayed here even if it was also accompanied by racist gossip. (But sometimes that’s accurate too.)

I personally found the mystery to be straight-forward and the culprit to be obvious. True, there were red herrings scattered throughout the novel but I thought them to be blatant rather than subtle. Other readers may feel differently.

There are romance threads throughout the novel but they aren’t the point of the story. I’d also say, as a thriller-mystery, that none of them are trustworthy. This is definitely a “Everyone is a suspect!” sort of novel. Not to mention that at least one of them is a creeper. Who walks into someone’s house unannounced, all the way up to their bedroom? On the other hand, the idea of being able to leave your front door unlocked is completely alien to me. I’ve never lived in a place where that was even considered a slight possibility so this sort of cavalier strolling around in other people’s homes uninvited is nothing but horrifying.

I wish there had been more of a relationship between Jaycee and Eduardo. I thought this was a missed opportunity. Deeper development on this front would have gone a long way to easing my discomfort about the way race was portrayed and tackled in this novel.

While I thought Dead Girls Don’t Lie was a straight-forward mystery, I found its portrayal of an insular, close-minded town to be well-done. But though I liked the way Jaycee maneuvered the various traps and pitfalls laid before her, I was never able to shake off my discomfort about the race portrayals. C+