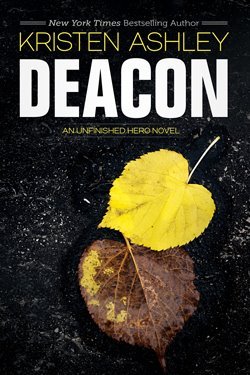 This is the fourth in the Unfinished Hero series. I’ve read Knight, Raid, tried Creed and abandoned it, and now Deacon. This is a relationship book more than anything. There aren’t a lot of hijinks and there isn’t an overriding suspense story.

Because it’s told almost entirely from the heroine’s point of view, it’s more about what will Cassie endure to have the love of her life. After years of saving, Cassie buys a Colorado property consisting of eleven rundown cabins. She moves with her boyfriend Grant and begins to renovate the cabins. Grant turns out to be a lazy asshole and her only returning customer is “John Priest”, a big guy who has danger written all over him. He pays in cash and his ID is no doubt fake.

But John turns out to be more steady than Grant and soon Grant is kicked to the curb as Cassie builds up her business. In the beginning, it’s amusing to see Cassie proudly inform the returning Priest that the rates to her cabins have gone up. With each infrequent stay, Cassie becomes more attached to the enigmatic Priest. During one visit, she takes a piece of pie to his door and is turned down, abruptly.

Yet there would be no book if Priest does not succumb. He does so but he’s not willing to give Cassie anything but his real name, Deacon, and only his first name at that. She teasingly calls him Deacon Deacon.

Part of the conceit of this book is that the reader assumes the hero is a good guy. Through Cassie’s friend Milagro we question Cassie’s seemingly unquestioning acceptance of a man who only spends a few weeks with her, never divulges any details of his past, but promises that his future is in her eyes. The reader is treated to Deacon doing good guy things such as standing up for drugged teens, being patient with children, and helping Cassie around the property. But Cassie knows only a few things about Deacon before she invites him to her bed. That he pays in cash, that his SUV is dirty, and that he looks hot and dangerous.

What he does is a mystery, even at the end of the book. I have only the vaguest of vague memories as to what Deacon does for a living. I know that Knight was a pimp and that Raid was some kind of bounty hunter of sorts. Deacon’s refusal to talk about his “work” and how it was going to be hard to extricate himself from the dark life he hid from Cassie hinted at something far darker. However, this build up was met with a rather unspectacular denouement making me wonder if Deacon’s refusal to leave his job had more to do with his own uncertain emotional state than any outside pressure.

Deacon was a mystery to me!

Parts of the story unravel at the end. There’s a dark emotional moment between the two and I’m still befuddled as to why Deacon responded in the fashion that he did other than the book needed an emotional dark moment. His past was horrific and yes, I can see how experiencing that would result in strong aversion to certain things but his emotional motivations didn’t match the actions or at least, I didn’t understand.

I enjoyed the relationship part of the story as Cassie and Deacon fought and reconciled over things like money, expectations of the other in terms of contact (i.e., their first fight was over Deacon not calling Cassie back and Deacon upset that Cassie hadn’t continued to call him), children, and so forth.

In most parts of the relationship, the important parts, Cassie and Deacon were a good fit. He never interfered with her running of the cabins as her first boyfriend did. He offered advice if she asked for it. The power dynamic in their relationship was very even.

It’s a comforting read and while the pace is a bit slow, I was entertained. I wish the ending had less of a crazy factor and was more in concert with the tone of the rest of the book. I don’t really know how to grade the book. I think if not for the ending, I would have given it a B- but as I reflected on the ending when writing the review, I was really disturbed by how much Deacon was unknown to me and frankly Cassie, even until the end. I’m sure Cassie would say that she knew everything she needed to about him but I guess I needed more. C+