I picked up Dark Waters because I’d read and enjoyed your 2010 release Sea of Suspicion. As I began to read Sea of Suspicion, I was struck by how much it reminded me of Anne Stuart’s Moonrise, albeit with a less wimpy heroine. Both books have a killer for a hero and a daughter in need. Both books have the heroine come to the hero’s deserted house at night and have him think she’s there to kill him. Both heroines have serious sexual hang-ups which dissolve in the face of the hero’s magical touch. Both books have a power-mad shadowy general who is a deranged threat to world peace. Dark Waters’s heroine is Anna; Moonrise’s is Annie. You get the idea. 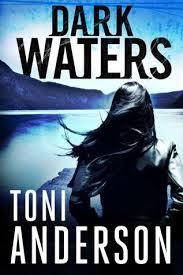 I liked Dark Waters a bit better than Moonrise. Dark Waters’s hero is saner and the heroine stronger.  The plot is marginally less whacked. Both books are C reads.

Your heroine, Anna Silver, is a schoolteacher with a sad story. When she was a teen, her father was convicted of embezzling money and sentenced to a long jail term. Her mom fell apart and then remarried a control freak whose son raped Anna on the night of her senior prom. Anna has grown up to be a loner who can’t stand to be touched by any man. She’s still angry at her father although she’s made an effort to stay connected to him since he got out of prison.

The book opens with Anna’s father Davis discovering his employers–a shady charitable organization that ostensibly helps injured vets–are stealing millions. Davis transfers sixty million dollars into another account, prints off a list detailing where the money has gone, and leaves his office. He is immediately chased by two thugs he knows will kill him. He mails the list off before they catch him to “an old but familiar address” and runs into the subway. In his last few moments he calls Anna from his cell phone and leaves her a panicked message.

Anna, I’m in big trouble. But I didn’t do anything wrong, I swear it…. I’m on my way to the FBI offices, but they’re too close. I’m never going to make it. They’re gonna kill me. They’re going to be looking for their money. I mailed you the printouts, but they don’t know where I sent it. You know. Take the information to the feds.”

She squeezed her eyes shut and held the phone so tight it was a wonder the casing didn’t crack. What had he been involved in? Something illegal?

“You need to get out of there until things quiet down.” The fine hairs on the nape of her neck stood upright. “Dammit, I’ve done it again.” Please, no, Papa. “I love you. And I’m sorry for everything. There’s only one person I trust besides you, you know that, right? Go to him, tonight. Tell him I’m cashing in those promises we made one another.”

The him is Brent Carver, the man who was Davis’s only friend in prison. Anna’s never met Brent, but she’s heard her father talk of him and knows where Brent lives. Anna, upon learning her father has been killed, decides to take her father’s advice.

Brent, like Anna, had an awful childhood. He killed his abusive father when he was a teen and served twenty years in prison. He’s been out for four years and, in that time, has become a reclusive world-famous artist. (He paints under an assumed name.) He lives an isolated life on the west coast of Vancouver Island. He is a total loner–the only woman he ever cared for was murdered last year (that story is told in Dangerous Waters and has Brent’s younger brother Finn as the hero.) Brent has enough self-loathing in him to stymie even Dr. Phil. He paints, broods, and swims. Then broods some more. He is, of course, gorgeous, but he hasn’t slept with a woman since he was sent to the pokey.

Anna shows up on his doorstep at two in the morning. Brent, who was brooding on his front porch naked, initially thinks she must be there for some nefarious purpose and pins her against his door. She screams, he drags her into his house, gets an awkward erection, and demands to know who she is. It takes the two of them a while to sort out the situation, but once they do, Brent is adamant Anna needs to let him help her.

The two of them stood close in the darkness. Too close. The hollows of her collarbone and graceful line of her neck called to something primitive inside him, and he had to force himself not to touch. She’d grown from the pretty teen he’d seen in photographs, into a pretty woman—maybe even beautiful. But her oval face was punctuated by that stubborn jaw that would have told him she’d be trouble even if she hadn’t landed in his lap in the middle of the night. Harsh gasps made her breasts stretch the thin fabric of her shirt, but as her expression once again morphed into fear, he worked very hard not to notice.

Fear wasn’t the same as weakness. Everyone in jail was intimately acquainted with the difference.

“Look.” He held his hands aloft and stepped back. “You can leave any time you want. I don’t want you here any more than you want to be here, but…” Her bottom lip stuck out just enough to set off a chain reaction in his body that ended at his dick. Off limits, partner. “Your dad was the only friend I had in prison and more like a father than my own.”

Anna and Brent then spend the next week and 250 pages avoiding the creeps who killed her father while trying to keep from acting on the attraction they feel. Brent thinks he’s too old (he’s almost 40, Anna’s 26) and too damaged and just plain too bad for sweet Anna. Anna finds Brent’s alpha male hotness both arousing and, given her history, terrifying. The bad guys chase the two while shooting and assaulting innocent by-standers. Anna’s mom sees whales and a way to marital freedom. There are snipers. Anna finds the package and sneaks peeks at Brent’s package. She realizes the truth about her father. Brent broods.

All of this takes too many pages–Dark Waters would have been a better book had it been a third shorter. On the upside, the plot is interesting and Ms. Anderson writes descriptive scenes well. Brent has a dry sense of humor that lightens the darkness of his tale. Anna’s mom is deftly portrayed. I’d like to see Brent’s art–he’s more Rothko than Kinkade.

By the end, Brent believes he’s worthy of Anna and Anna has overcome her sexual reluctance with zest. The latter bothered me more than the former–honestly, I was thrilled to encounter less brooding.

I was discomfited with the way Anna so easily overcame years of disabling sexual shame.

[spoiler]I could believe she was attracted to Brent. I couldn’t believe that in less than a week of meeting him and having been kissed by him once, Anna told her story, shed her fears, and found her orgasmic self. In a way, her relatively easy conquest over her past trauma made that trauma seem less powerful. Given that she’s spent ten years being unable to be touched by or feel passion for a man, and has been unable to connect emotionally with anyone, it’s clear her teenage rape shaped her profoundly. One night on a beach with a guy who has been essentially celibate his entire adult life–this just adds to the weirdness–is unlikely to “cure” her. It’s clear Ms. Anderson has great sympathy for victims of rape and her portrayal of that crime and its influence is detailed and sympathetic. Her able handling of the damage rape does makes her quick fix stand out as facile and, in 2013, unaware.[/spoiler]

Those looking for a strong romantic suspense novel would be better served reading Sea of Suspicion (or good Anne Stuart) than Dark Waters. Dark Waters has its strengths but lacks the credibility necessary to make its HEA believable. It gets a C+ from me.

P.S. And maybe it’s just me but there’s no way sand adds a “fine layer of friction” to sex. There’s a reason for beach blankets.