Lately I’ve been in the mood for something different. It’s that reader restlessness that strikes me from time to time and makes me desperately want something new. It’s been that kind of year in terms of books. Because of this, I went into Dark Dealings with no expectations. It’s been a while since I’ve read a fantasy romance (or is that romantic fantasy?) but I didn’t want unreasonable hopes to lead to disappointment. 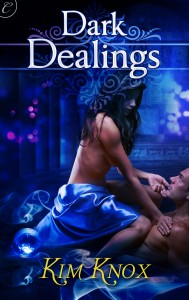 Ava Kalle is a Thief. In this world, that means she’s some sort of flesh-eating energy vampire. (Just roll with it, readers.) For years, she’s faithfully served and spied for a powerful mage named Reist. And of course, Ava also happens to be in love with Reist but thus far, her affections are unrequited.

Ava has been waiting for Reist to realize her feelings, watching him take up with one woman after another. Because it’s completely healthy to watch the man you love sleep with pretty much every other woman in the general vicinity. But she soon learns that waiting around was a mistake when Reist’s latest fling becomes something more.

But never let it be said that Ava is one to give up. This latest development leads her to seek out Heyerdar, an elemental who is the emperor’s captain of the guard. Heyerdar is the ex-lover of Reist’s new lady love. Ava offers him a suggestion: they team up in order to steal their respective loves back.

This book had many elements I liked but they didn’t quite come together enough to win me over. First of all, the worldbuilding is very thin. There are Thieves (like Ava), Mages (like Reist), and Elementals (like Heyerdar). Thieves and Elementals are considered old magic. Mages are a newer development but have all the privilege in this world. There’s a point in the book where Heyerdar says that mages disrupted the natural order of things. But how did that happen? Why did it happen? Heyerdar is extremely powerful so I fail to see how an entire race of people like him would just let the mages sweep in and do their thing without complaint. What about the connection between the thieves and the elementals? There are so many hints to a larger history behind the setting that it was frustrating not to have the full picture. Yes, the mages suppress a lot of that knowledge in order to keep their power and influence but it’s evident there’s a wealth of social conflict between thieves, elementals, and mages and none of that was fully explored.

The external plot is driven by a series of deaths. Heyerdar and Ava have to investigate them and catch the culprits. It’s obviously a plot device to push them together and force them to interact outside of their deal. That’s fine and all. It’s a device that can work well.

My complaint here is that resolving the mystery required some mental gymnastics and accepting things on faith without any elaboration or explanation. Oh, of course this random person who shows up out of nowhere, is connected to Ava’s mysterious past and is a major character’s brother is also hunting down the killers. Oh, of course the killers are part of a conspiracy to usurp the throne. Oh, of course the conspiracy is really a front for something else. There needed to be more groundwork laid down for these things to be pulled off well.

That said, I liked Ava’s character quite a bit. I do love the difficult heroines and she is a prickly one. She’s not what you’d call a good person. She wants to ruin a relationship. Left unchecked, she eats people! Cannibals are not our heroes.

But she’s placed in an awkward position. She’s loyal to the man who saved her life. I’d argue that much of her love for Reist is tangled up with gratitude. Reist absolutely knew her feelings and capitalized on them. Ava’s role as his spy gives him a major advantage over the other mages and helped elevate him as the emperor’s right hand. She was used and I can’t entirely blame her for lashing out the way she did. Now I’m not advocating that breaking up other people’s relationships is ever a good thing to do because 1) it’s not; and 2) other people’s affairs are not your business, but I can see where she was coming from.

I liked the fact that the narrative focuses mostly on Ava’s growth and journey as a character. In so many stories, the focus tends to be on the male love interest and that never really happened here. I do wish we’d gotten more insight into Heyerdar’s character. Aside from it being obvious that he had no true interest in reconciling with his ex-lover, we didn’t see what made him tick. Heyerdar is practically immortal. Why is he the emperor’s left hand?

It’s rare that I wish a book be longer because if there’s a genre where books don’t need to be longer, it’s fantasy. But in the case of Dark Dealings, I think some more space would have helped with fleshing out the world and exploring the social conflicts, which in turn would have strengthened the central plot revolving around Ava, Reist, and Heyerdar. The ending is more HFN than HEA but in this case, that’s fitting considering the circumstances. And I think the book does succeed in convincing us that the HFN will become an HEA. C+