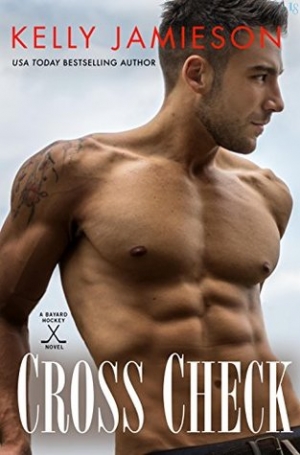 A party girl and a clean-cut college hockey player discover that they’re not so different in this sexy, soulful Bayard Hockey novel from the bestselling author of Shut Out and the Heller Brothers series.

Ella Verran has three goals this semester: get off academic probation, repair her relationship with her friend Skylar, and take some responsibility for her life. All of which are hard enough without hot, snobby hockey player Ben Buckingham around to distract her. Ella can’t stand Ben, and she knows the feeling is mutual. But he’s best friends with Skylar’s boyfriend, so he’s always around—taunting and tempting Ella in ways she never thought possible.

As the star forward of the Bayard College hockey team, Ben has goals too, like playing well enough to land a spot on an NHL roster. Ben is perfectly poised on the ice, so why can’t he keep his cool around Ella? Her wild behavior rubs him in all the wrong ways—and a few of the right ones. But as they skate around each other, Ben learns that there’s more to Ella than her bad reputation. And when the line between love and hate starts to blur, he can’t resist crossing over and sweeping her off her feet.

Note to readers: Spoilers for the first book in the series, Shut Out follow.

After the success of Shut Out last year, I had high hopes for the second book in your Bayard Hockey new adult series and I made grabby hands when I saw it was available for review. I was also excited because in the earlier book, Ella slept around a lot and I wanted to see what you’d do with that. However, Cross Check was much more uneven than Shut Out. It didn’t have the tight plot of the earlier book and it forayed too far into didactic territory for me. There were things to enjoy in Cross Check and I certainly didn’t hate it. But it wasn’t as enjoyable as the earlier book and overall that left me feeling a little disappointed.

Ella Verran was introduced in Shut Out. She and her two best friends, Brendan and Skylar started college together the year before. Ella had an unrequited crush on Brendan but Brendan was interested in Skylar. Skylar didn’t want more than friendship from him and he ended up sexually assaulting her. Subsequently, Brendan committed suicide and this sent both Skylar and Ella into a tailspin. Toward the end of Shut Out Ella finds out that Skylar was raped by Brendan but for much of the book, Ella believes that Skylar rejected Brendan after consensually having sex with him and she therefore blames Skylar for his death. Ella acts out, drinking heavily and sleeping around to make herself feel better. Consequently and unsurprisingly, her grades suffer.

At the end of Shut Out, Ella and Skylar are tentatively repairing their friendship but Ella is aware she has more work to do. When Cross Check begins, Ella is placed on academic probation and determines to undertake her sophomore year as a better person than she was the year before. She starts seeing a counselor, she stops drinking and she’s sworn off men for a while too. She’s also putting in a lot more effort with Skylar and with her studies, determined to get her grades up so that her parents don’t have to know what a mess she had become.

Skylar is happy in her relationship with Jacob “Flash” Flass. Flash’s buddy is fellow hockey player, Ben Buckingham. As Ella makes an effort to spend more time with Skylar, this throws her into Ben’s company. Ben is super-well put together. He comes across as a GQ model type and Ella thinks he’s stuck up. For his part, Ben didn’t think much of Ella’s behaviour the previous year, even at one point calling her a slut. To his credit, Ben does feel bad about that now and he has a number of explicit conversations with his friends and with Ella where he notes the double standard for sexual behaviour for men and women and specifically says that there’s nothing wrong with Ella liking sex and he ought not to have judged her for that.

Ella’s storyline was very much that she was acting out in having lots of hookups so it wasn’t a surprise to me that she decided she didn’t want to do that anymore. She wasn’t a girl who had been having lots of sex because she wanted to and because it was fun; that would have been a different story. Ella realises that she needs a more emotional connection to enjoy sex (not true love necessarily but she has to be able to say she likes the guy and, that he likes her) – and that’s something she cannot say about all of her previous experiences and it is something she’s ashamed of now. My sense was that Ella was only ashamed because her motivations weren’t what she considered right for her and I felt that fit her character.

Where Shut Out deals with rape culture in perhaps a more explicit way, in addition to the importance of the actions of bystanders, Cross Check picks up on the sex-shaming aspect of rape culture. There were some really positive conversations about the topic. I particularly enjoyed this exchange in which Ella and her friends maintain the moral high ground.

“What did you just say?” Ella demands in a low tone, her eyes flashing.
“Jesus,” Flash says, looking at Tiffany in horror.
“You don’t even know how truly disgusting what you just said is.” Ella takes a step toward Tiffany. Flash grabs her arm and I’m glad because I’m a little worried she’s going to slap Tiffany and there’s going to be an actual catfight.
“You can talk, slut,” Tiffany says, backing away.
Ella’s eyes go wide and the air in the room nearly catches on fire. I make a noise in my throat and all the other guys make it too, a low “uh-oh” of disgust.
I wish I had some kind of smart answer or put-down, but I got nothin’.
Then Natalie steps forward and goes nose to nose with Tiffany.”What did you just call her?”
“Uh . . .”
Brooklyn slides over and has Natalie’s back. She points at Tiffany. “Girl, get with the times! Slut shaming is so over. Women are sexual. We are free to express our sexuality all over the damn place. Owning our sexuality is empowering, not a reflection of whether we’re good or bad.”
“It’s okay for women to enjoy sex,” Natalie adds. She gives Tiffany a fake smile. “So stop being such a jealous hypocrite.”

Ben and Ella have an “enemies to lovers” vibe going on. It seemed a little manufactured to me. I didn’t quite understand the vehemence of, particularly, Ella’s reaction to Ben. After they start getting to know one another, it becomes clear to both of them that they were mistaken in their views about the other’s personality. Even then, there is still some “hate sex” (but not really) and quite a bit of stop/start to their eventual relationship.

Ben has a difficult backstory of his own about growing up poor and his father being a criminal. This explains his efforts to maintain a certain image at college. Ben’s storyline would have benefited from a little more depth and perhaps a little less melodrama.

The hockey aspects of the book were solid. My sense was that you know what you’re talking about here and I enjoyed learning a little about how college players are drafted into the NHL. I also liked the nod to your other series, Aces Hockey.

There were quite a few scenes within the book I enjoyed but they didn’t join together that well for me. I found Cross Check to be a bit disjointed and uneven in that regard. I also felt that some of the messaging was too explicit. Where in Shut Out I thought you stayed on the right side of “educational but entertaining” I felt Cross Check went too far into preachy.

I tend to have something of a hit and miss track record with your books. When they work, they really work for me. This one certainly had it’s entertaining moments but overall, it was nowhere near as successful as Shut Out – which made my favourites list in 2016. Still, you’re an autobuy author for me because when you’re on, you are on.