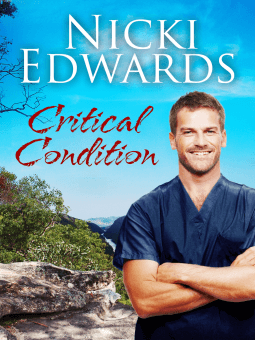 Liam O’Connor wants a wife. Problem is, the type of woman he’s looking for doesn’t exist.

After years working as a paramedic in Sydney and living the bachelor life, Liam has had enough. He’s convinced himself, and everyone else, that he’s moved home to Birrangulla for a slower pace of life, but what he’s really looking for is the woman of his dreams.

From the outside, emergency nurse Poppy McDonald lives a charmed life. Unfortunately, when she moved to the other side of the world to escape her family, all she did was swap one controlling environment for another. After Poppy’s father dies, she returns to Australia to face her past. And her mother. But she has no intention of staying, and definitely not in Birrangulla.

When Liam and Poppy meet, there’s an instant spark. Liam knows Poppy is the one even though she’s carrying more than her share of baggage. But can he gain her trust and get her to look beyond her past? Or will the man Poppy left in the US return and ruin everything?

So many romance heroes are running from marriage or commitment – at least until the heroine changes their minds – that it was refreshing to read a blurb about a guy looking and ready for a wife. But wow, what an overload of whom I assume are characters from past books to start this one. My head was swimming trying to keep them all straight. Good thing the action soon moves on. While Liam is looking for love, Poppy thinks she’s already got it only to find out she’s been in a shite relationship for years without catching on. Like women the world over, she’s convinced herself that the odd phone convo she overheard means only what he tells her it does. When the truth finally hits her, it slaps pretty hard.

Meanwhile Liam struggles to help his paramedic partner with her issues as they work through their emergency calls. It all sounds real based on what I read in “A Thousand Naked Strangers,” but I had to wonder why this bit was there as it didn’t seem to carry through much in the rest of the book.

Unfortunately it takes the death of Poppy’s father to bring her together with Liam. Since Birrangulla is a small town and her father was a cop, of course Liam knew him and finds it hard to reconcile the man he knew with the father Poppy shunned after he abandoned her on her 13th birthday, leaving her with her mentally unstable mother. Liam can’t deny the pain Poppy’s obviously still feeling but their initial meeting gets off to a rocky start. His humor is mercurial and he resorts to his default mode of teasing when he meets a woman he likes – and he immediately likes Poppy.

He does do a quick and – Poppy senses – sincere apology that rights the ship that had been going down. Liam might have wanted an uncomplicated relationship after his disastrous attempt at settling down years ago but it doesn’t look as if he’ll get it. They do have one major thing going for them – a shared, warped sense of humor due to their common medical background. There is a lot of medical stuff in the book and after a while, I couldn’t help but feel everyone in their town was a ticking medical time bomb waiting to go off the moment one of them was around.

Liam realizes his feeling that Poppy is “The One” perfect woman for him is fast but they click on many levels and he admires far more about her than her good looks. Poppy is convinced that once Liam has met her bipolar mother, he’ll run like every other man. I thought this aspect of the story was handled well. The emphasis is on how her mother’s illness has affected Poppy’s life but her actions and reactions seem realistic for a person who has dealt with the wild mood swings, irrational behavior and reality of seeing to her mother – who often refused to take her meds – for years.

The confrontation with Poppy’s initial lover felt tacked on but it did propel her relationship with Liam onward. I was expecting things to wrap up after this but here the book dragged, for me, through a few chapters of what is usually a condensed epilogue of events. I liked that the book tackled some fairly complex issues but after the first 3-4 of them, the overabundance of medical scenes felt more like padding. After thinking about it, my grade is of the mixed bag variety. C+