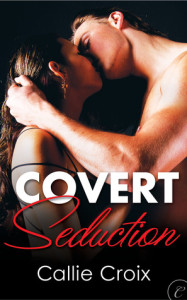 Reid Galvin is a Navy SEAL and he spent a few weeks falling for Becca Anderson but while he was deployed a Chinook crash resulted in the deaths of several SEALs and other special operatives.  After he found he was unable to respond via email or text or Skype to Becca’s last missive which happened to be a steamy fantasy.  During his period of withdrawal, though, he realizes he loves Becca and wants to be able to return home to her.

Becca was embarrassed that her outpouring of emotion was met with silence but she eventually began to move on and accepted a date with a co worker. When Reid returns to the States for leave his only goal is to return to Becca and convince her of his love for her. Even though Becca tells him that she is busy, Reid decides to drive down to Alexandria from Virginia Beach to wait for her because he has only 48 hours of leave in which to convince her that he loves her.

Becca is programmer with an investment firm. Her co worker gives her an USB stick that he claims has information that contains explosive information.  This USB places them both in danger.  This suspense plot is actually well integrated into the storyline but it could have been teased out more.

I love the tender, sweet, protective alpha (as opposed to the jerkhole alpha) character played by Reid and I wanted to see more of that happen outside the bedroom.  Instead, there are two very protracted love scenes that dominate the word count.  Given that there is both a suspense element and issues to deal with involving Reid’s frequent absences and his emotional withdrawal, I longed for more out-of-bedroom interaction.

I also thought that there was a disconnect between how Reid repeatedly tells us how he appreciates that the heroine isn’t into him because he is a SEAL and the story totally fetishes SEALs. The heroine may not have been a SEAL groupie, but she sure loves him because he is a hero (“But part of the reason I fell in love with you is because you’re a hero, so it wouldn’t be fair to hold it against you now.“) and researches about SEALs constantly (“the SEAL books he’d seen in her bookcase earlier told him just how seriously she took learning about what he was and what his job entailed.“). I probably wouldn’t have noticed it so much but for the fact that the hero makes a big deal about her lack of groupie status.

I also liked Becca. She fell for Reid but she also wasn’t going to sit around waiting for him, even if she accepted the date half-heartedly.  Reid and Becca were well matched on paper and certainly had a lot of chemistry, but the emotional connection between the two needed to be beyond the physical in order for me to find the HEA convincing.  C+