You’ve been reviewed at DA a lot but never by me so when I saw you had a new book out, I grabbed the chance to check out your writing. DADT is history now so what else is there to keep two men in love apart when they’re both in the military? The age old separation of officers and enlisted personnel, that’s what. Here it doesn’t matter if it’s heterosexual, homosexual, or lesbian – an officer and an enlisted person simply can’t mix it up. You hammer this risk home for most of the book but in the end I thought the payoff didn’t match the hype.

“As long as no one asks and they don’t tell…

First class petty officer Eric Randall is less than thrilled about taking orders to Okinawa. Three long, lonely years on a crappy island that’s thousands of miles from his daughter? Oh. Yeah. Sign him up. But as long as he’s stuck here, he might as well make the best of it, so he discreetly checks out the local gay scene.

Shane nearly drops his drink when the gorgeous, cocky-looking guy strolls into Palace Habu. He buys him a drink, and before long, they’re making out in a booth. Eric is a straight-to-the-point kind of guy and doesn’t want to play games. Since Eric’s idea of not playing games is getting the hell out of there and going back to one of their apartments, Shane is more than happy to go along with it.

What starts as a scorching-hot one-night stand leaves both of them wanting more…until Eric finds out Shane doesn’t just outrank him, he’s an officer. DADT may be repealed, but an officer getting involved with an enlisted man falls under conduct unbecoming.

Still, they can’t resist their mutual desire. There’s no reason anyone has to find out. But secrets have a way of outing themselves.”

Alternating first person storytelling means that some things are going to be rehashed. It didn’t end up being as much as I was afraid it might but it was still slightly awkward. SarahF called it lingering weirdness and I agree. 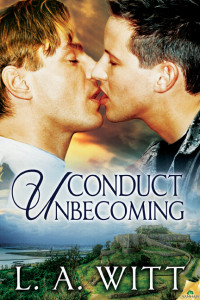 I know a teensy bit about the military having had several friends either in it or related to someone in it but still the details about their military careers and day to day job stuff is interesting in a “foreign culture to me” kind of way. But in a romance, I’m used to the main characters being around each other more. Here, Shane and Eric think a bit about the other after their initial meeting but then it’s on to their daily grind. This separation could be problematic for some readers who want more together time. Looking back on SarahF’s review of your last book, in your comments you mentioned this one would be on Okinawa and from the details, it seems like you’re describing places you know well. Still, some scenes tend to drag a bit, veering into travelogue territory and I found myself skimming to get past them. I did learn enough that I will never try Habu sake.

Eric and Shane are two very aggressive and straight to the point lovers. They’re both out – to themselves and as much as possible when they go out to gay bars near military bases. Neither wants to waste much time blah, blah, blahing. Interest? Check. Compatibility? Check. Place to go? Check. So let’s get the hell there and get this going. Once they get to Shane’s apartment, it’s Katie-bar-the-door and get out lots of lube because they hurl themselves into vanilla sex that sizzles.

DADT is dead but it’s still not easy being gay in uniform is what I’m taking from this story. No one can be thrown out but others can still be assholes and it can make life a lot harder, opening you up to all kinds of shitwadery that it’s better to avoid if you have the option. Thus there’s still caution and hesitation about being openly gay. Add to that the issue of the difference in rank with Shane being the officer and Eric the enlisted man (MA = master at arms, I love that this still sounds slightly swashbuckly!) and there’s the conflict going on here.

Fraternization is still abso-fucking-lutely one of the best ways to kiss your career goodbye. Eric and Shane both have lots of years already under their belts and want to stay in long enough to retire. Getting caught will shit can two long careers. So this looks like it’s going to be the main conflict as they are sexually compatible and compatible out of bed as well. But…when will the fit hit the shan? After a carrier sized load of angsting by these two about the danger they face in being out in public…we get one near miss. I gotta say I finished the book feeling a bit let down.

The plot sounds realistic, the characterization is solid, the detail about the place is knowledgeable, if exhausting at times, but with no personal compatibility problems the only thing left was the military issue and after an entire book spent building that up all we get is “whew, that was a close one.” I guess given the plot set-up there really was no other way things could play out and still have a HFN with a potential HEA and eventual Honorable Discharge for all involved but I still felt a bit cheated. C+