Both Sirius and I are fans of sport romances, so when Sirius told me that she was reading an m/m sport romance (on figure skating in the Olympics, which couldn’t be more timely), I was intrigued. Then she told me that one of the characters was South Asian and I couldn’t resist checking it out. I’d read an earlier Andrews sports romance that featured tennis players that I remember enjoying, so we decided to do a joint review. 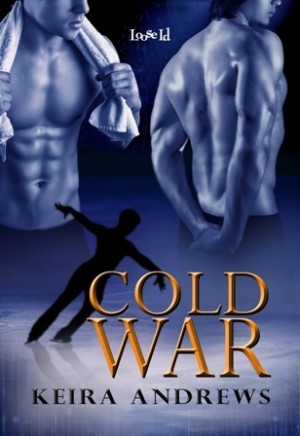 Sirius: I love figure skating, I have been watching it for years and when I saw that a Russian figure skater was one of the main characters in this novella, the deal was sealed. I had to request this book. I also have to state that being from that part of the world, I will always have a soft spot for Russian skaters, but I also admire and cheer for Americans and Canadian skaters and many others when I feel they are deserving of my cheers. And I like when a sport romance actually shows at least a little bit of the sport, rather than just stating that the characters play the sport and then concentrating on their relationship and nothing else. In this book we definitely see the skaters actually performing – we see a couple of practices and some of the competition and I thought it was beautifully described and well researched.

I am not an expert in figure skating – as I said before I have just been watching it for years — but what I know about the sport I thought was described correctly. I have my doubts about certain things but that is more connected to my expectations than definitely incorrect research. For example, when we meet Dev and his partner Bailey for the first time, they are upset about the Russian pair taking gold away from them. They are upset because Mikhail’s partner Kisa fell during their program and while Dev and Bailey might have made a minor mistake during landing, neither of them fell.

There have been plenty of complaints about the judging in the figure skating over the years. I am sure some of the complaints have been justifiable and changes are needed, but I have never and I mean never seen an international competition where the pair (or a person in singles competition) won when the winner fell and their competitors did not. I am not saying that this could not happen, but I would argue that this would be something extremely out of the ordinary. (P.S. Well, what do you know: the Japanese skater took a gold in men singles competition even though he fell twice in Sochi. Never say never. I would still argue that his situation– after a flawless short program with an amazing score–was different from what the author was trying to introduce in this book, but I do have to eat my words since he fell twice and still won).Of course I have seen situations where several couples made minor mistakes and  the judges decided that one mistake was not as minor and of course the losers were always unhappy about it. We all see competitions when several people fall during their programs and then of course judges have to decide who won amongst those athletes, but the example which is described in the beginning IMO took the argument to a ridiculous extreme.

And we hear Dev complaining about how soulless the Russian pair’s program was and how the judges had been overscoring them for years, but I just wrote it off to sour grapes and proceeded with the story. Hey, at least he admits that their technique was impeccable. I was thinking that as an observer I knew that in the pairs competition technical elements are extremely important and often more important than artistic component (contrary to the dancing competition), and considering what happens soon after the initial setup I could hardly take Dev’s opinions about Mikhail as a competitor as reliable.

Sunita: Both the opening conflict and the description of the Russian dancers felt a bit stereotypical and over the top to me (for the reasons you give), but I figured that it was a way to get the story going so I groaned a little and went with it. I would really like to put to rest this “soulless but technically perfect” stereotype about Russians and other good competitors. It smacks of cultural relativism and it’s just not true. But it’s a common shortcut and I kept going. And as you say, we are into the lust action pretty quickly.

Sunita: That was confusing to me too. Not the lust, although that happened really fast. But then these are young men who don’t get a lot of opportunities to date and who have to stay mostly in the closet for sports reasons when they’re being monitored during training and competitions, so the idea of pent-up lust exploding like that was kind of believable. But I wasn’t sure about the timeline either. I think maybe the Olympics here were supposed to be happening at the same time as Sochi, but Annecy was moved to Sochi. I’m really not sure. There are references to sports (like slopestyle) which are new this year, and the competitors are older but still in their 20s (Dev is 29).

Given the book is novella-length, I suppose a fight-turned-mutual-orgasm scene is as good a way to get the setup rolling as anything. If you like explicit sex scenes, this one provides a fairly good, graphic, description.

Sirius: Their romance resumes (or shall I say begins) in Annecy, because really one quick encounter and thinking about how much they hate each other or how much they are attracted to each other for year or two does not really count as a romance in my book, especially since they barely spoke to each other in Kyoto.

I thought the excitement and atmosphere and their eagerness to win was really well done. I thought the situation which Russian athletes are facing if they do not win the Olympics was also well done – Soviet times, now Putin times – did they come full circle? Sure looks like that to me.

Sunita: I liked the inclusion of ethnic and national diversity in the story a lot. Dev’s last name, Avira, didn’t really sound right to me but I don’t know as many Kerala surnames as I do other for other parts of India. The mother is stereotypical but her dialogue is pretty well done (I could hear her sing-song nagging in my head as I read). But authors, you do not have to have all your Indians eating idli/dosa and biryani at their feast dinners. Really. We have other dishes. And we don’t usually eat biryani and dosa at the same meal.

The Russian stuff actually bothered me a little. I defer to you on the authenticity feel because I wouldn’t catch those kinds of errors. But there is a section of dialogue after Dev and Misha have gotten together again in Annecy that made my eyes roll. Apart from the fact that they are talking politics after sex (is that really likely as pillow talk between 20-something Olympic athletes?), Misha describes Putin’s Russia in very basic, stereotypical terms, although the description of gay oppression rings true to the present. But his father’s views on Communism felt off:

“My father says it’s like like Communism without … He seemed to be searching for the right word. “Without ideals. Not for the greater good this time.”

I can’t imagine an average Russian from the Brezhnev-to-Gorbachev era (when he could have been drafted into the quagmire of the Soviet war in Afghanistan) unironically describing Soviet Communism as “for the greater good.” It just felt like another stereotypical shortcut and it threw me out of the story. I imagine most people won’t care, but I just thought it was unnecessary.

Sirius: Most importantly, the romance just felt too fast for me – I mean I understand that the writer tried to deal with it by having them compete side by side for years and I guess thinking about each other for years, but since they did not really realize that hate means the underlying attraction that did not quite count to me as long term tension. Opinions may differ on that.

Sunita: I agree totally. We went from insta-lust to more lust, which was OK. But then they start to fall in love, in about a week, without talking to each other or spending time together. I didn’t buy it at all. Not because it wasn’t possible, but because there was nothing on the page to show me it was happening. They fight, they have sex, they think about each other, they have sex, they fight, and then they’re in love heading for their HEA. Right.

Sirius: I have to give props to the writer for using Russian words and sentences perfectly . She thanks someone with Russian name in the beginning of the book and it definitely showed – just lovely. Any time Misha uses Russian word, or sentence (not that often, do not worry, but it is used several times) it was used perfectly. I think any time the writer needs to use the language foreign to them they should use native speaker’s help. I think I loved Misha naming his dog “Zoloto” heh. My grade is a C+.

Sunita: The Indian parts were pretty good; at least he was Indian and from a state fewer people know about at that, so I agree Andrews seems to have done her homework and I was glad for the diversity. Overall though the story felt rushed and the transitions between the different parts of the storyline romance were pretty clunky. But for this time of year, it’s a timely and quick read. My grade: C-.