I’ve been seeking out contemporary romance in the m/m genre and when I read the synopsis for your book it fit the bill. This is a romance about two men who are not exactly ordinary, but who want the same things out of life that most of us do, and who aren’t sure they’re ever going to be able to achieve them. Given the backstories of the two protagonists, this could have been a much more angst-filled book than it was. I would categorize it as a relatively upbeat, almost sweet romance (except that as an m/m it will never be categorized as sweet even if there were no sex scenes, and there are, so never mind). 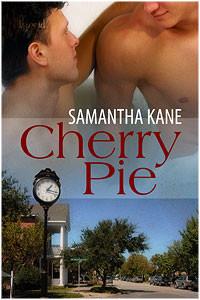 The book is set in the (fictional) small town of Mercury, North Carolina, which is within driving distance of the Atlantic Ocean. John Ford, who is in his mid-thirties, has moved to Mercury from Los Angeles after a long-term relationship ends traumatically. He doesn’t have to work for a living, and he spends much of his time restoring an old house he’s recently purchased. When we meet him, his most in-depth conversations appear to be with his coffee machine. Connor Meecham is a native of Mercury who has been away for nearly a decade. He returns at the age of twenty-five and plants himself across the street from his old house, the “Meecham Mansion,” which John now owns. John is initially skeptical of this excessively thin, excessively quiet man, but he eventually invites him in and the story and their growing romance take off from there.

Connor was a star high-school quarterback and went off to Georgia Tech on a football scholarship, but a college injury ended both his NFL dreams and his scholarship and sent him into a downward spiral. He returns to Meecham with nothing to his name and the desire to start over. John gives him room and board in exchanging for help rehabbing the house and garden. As Connor reconnects with old friends (and enemies), John is slowly incorporated into Mercury’s community. The titular cherry pie represents the bonds that link Mercury’s residents as well as Connor’s aspirations for a new life:

“What do you think, Evan? Is heaven cherry pie?” John asked with a smile in his voice.

“I think heaven is eating cherry pie if you want it to be.” There was a pause. “What about you, Conn?”

He blew out a breath. “I don?t believe in heaven.”

“Why?” That was John, and he just sounded curious.

Conn turned on the step and leaned his back against the post so he was facing them all. “Because heaven is right now. I want to eat my cherry pie right now. I want to live the way I want right now. If I wait, well, what for?” He shook his head. “No, I’m not waiting on a heaven I can’t see or feel or touch.” He gestured to the house and the street. “I’m just gonna make this heaven.”

This book reminds me of a small-town category romance. The romantic relationship is front and center, and it is embedded in Mercury’s southern small-town context. Connor runs into old friends, including his best friend from high school and the town matriarch, Miss Priscilla Jones. With the exception of the sheriff, no one in town seems to have any trouble with Connor and John’s sexual orientation or relationship. Even the church they attend immediately accepts them as a couple. I found this a bit hard to believe, but the book seems to fit into a subgenre within m/m that corresponds to sweet romances in mainstream category romance. There are a number of sex scenes, but they don’t dominate the narrative, and the conflict between the protagonists arises from issues within the relationship rather than contextual or other social factors.

Here, conflict stems from two sources: Connor’s fear that John is simply replicating his previous relationship and not thinking about Connor as an individual, and the intrusion of Kristine, the sister of John’s former lover. But these issues are resolved fairly easily, and there is little to impede the story’s steady progress toward an HEA. Connor’s past might have created difficulties, but again, no one really seems to mind except for the obviously villainous sheriff, and he is routed by Miss Priscilla (in this southern small town, one of its most powerful families in the pre-Civil Rights era was apparently African-American). By the end of the book John has become fully incorporated into Mercury and is using his wealth to provide local jobs, Connor has regained his sense of self and his optimism in the future, and their HEA is assured.

I enjoyed reading the book, but it felt rather slight. One of the reasons I read m/m is because the external and internal conflicts can combine to create a rich, multi-layered journey to the couple’s HEA. Here, the absence of much of either made it pleasant but unmemorable, and the unquestioning acceptance of homosexuality by Mercury’s varied residents required a very strong suspension of disbelief. The writing is assured and the characters are quite well realized. I can recommend this to readers who enjoy these types of stories, but for those who prefer more drama and conflict, it will probably not be as satisfactory. Grade: C+