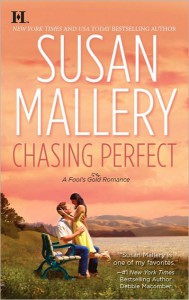 I liked this book but not as much as I thought I would. Maybe in another re-read it would be a favorite but for some reason I never became emotionally engaged.

The hook is that Fool’s Gold is a town with too many women and not enough men.    Charity Jones   is brought in as a city planner for Fool’s Gold and charged with the mission of bringing new businesses to town, starting with a research facility to be built by California University. The research facility will bring an influx of males into the town because, ah, researchers are male jobs? There was this weird dynamic going on between what I think was supposed to be a pro female story (we women can be business owners, engineers, mayors, city planners, chiefs of police, etc.) but the whole goal of the town is to bring in men for the women to marry and thus that meant bringing in men jobs.

If men are the scarce meat in Fool’s Gold then Josh Golden is prime Waygu beef. Second youngest cyclist to win the Tour de France, Josh Golden retired at the prime of his career after the death of one of his teammates in the peloton. Golden didn’t retire from grief or injury. He retired because he is full of fear. He is scared that the next time he races he’ll be the one with the severed spine.   But Josh is as afraid of showing his weaknesses as he is of the weakness itself.   His past is a Lifetime Original Special, left tattered and broken by his mother, Josh is taken in by the town and has become its celebrated son, an image he works hard to keep polished.

The besetting sin of this book is its  superficiality because I often felt that what was so obvious on the surface was contradicted by the actions of the characters.   For instance, from the minute that Charity comes to Fool’s Gold she is warmly embraced by all the single women.   Further, everyone starts pushing John and another local single male at her. The ease at which Charity is  assimilated  into the small town with nary a hint of animosity is also almost utopian.

Wouldn’t a town that is desperate for men be jealous of its precious and scarse resources instead of throwing them at some pretty stranger?   I don’t think that a truly man hungry town would be throwing their tastiest treats at a new diner. And why wouldn’t the mayor, desperate to bring men to the town hire a male city planner and not a female one?

Josh, who rides bicycle at night so no one can see him, spills all his dirty, dark secrets to Charity after almost no prompting and only a few days of acquaintance.

I did appreciate the manner in which Charity’s attraction to Josh was portrayed.   She recognized that she was developing a huge crush on him and her star struck response, not at his accomplishments, but at his stunningly good looks, was charming.

The conflict that separated the two, however, wasn’t well developed.   I understood that Charity wanted to settle down and create roots after the nomadic existence she lived with her flighty mother, but I wasn’t able to translate this desire to settle down with her antipathy toward Josh, the star athlete.   She was convinced that if Josh raced again that his quest for fame would take him away from her.

I think I understood what   you were going for. Josh came to Fool’s Good to lick his wounds and once his fears dissipated so would any relationship or so thinks Charity. The problem is that I didn’t believe in it. Because we were in inside Josh’s head, we knew his quest to get back into competitive racing wasn’t for the fame component.   Plus, there wasn’t anything externally   that would   give Charity the impression that Josh was a fame whore and that he was an inconstant guy.

Sure Josh lived in the hotel but he had dozens of ties to that community and it was clear he would always return there.   Maybe if the conflict had been that Charity wouldn’t have wanted to travel with Josh or if she wasn’t prepared to become an athlete’s wife who would spend hours alone while her husband trained, I could have been more sympathetic but that isn’t how it was portrayed.   It centered around this whole “fame” thing and Josh was never portrayed as a fame hungry man, making Charity’s opposition to their relationship as irrational.

Despite the problems I had with Charity, the story was an easy read.   Josh was charming with a somewhat simplistic story arc.   The matriarchs of Fool’s Gold were both smart and comical.   I thought for the most part the story was a very pro feminine one but I would have liked the insides of the cake to have matched the outer frosting.   It would have made for a more palatable desert.   C+