REVIEW: Chase Me by Tamara Hogan

I’ve been trying to read different sounding paranormals as much as possible in hopes to revive my love and interest in them. “Chase Me” is a blend science fiction with traditional paranormal myths however during much of the book I kept regretting I hadn’t started with the first in the series because I did not have a good feel on the world building. It wasn’t until about 40% into the book I discovered that the paranormal beings on Earth descended from supernaturals that crash landed on Earth many years ago. While the romance is sweet but hot, the external conflict remains unsolved and when I closed the book, I felt like I had only visited one stop on a long train ride. 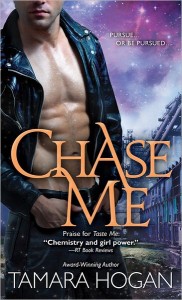 Archeologist and valkryie, Loren Schlessinger, discovers a metal box whose metallurgy matches no known substance in a dig site in Northern Minnesota. She believes it is concrete evidence of her ancestors’ existence. While she is strong, smart, and very skilled, she is not a good administrator and so the Council of other beings sends Gabriel Lupinsky, a self described werewolf mutt, to serve as the administrator of the dig site.

As a Valkryie, Loren has to expel her energy through fighting or, well, you can all imagine the second option. She finds herself attracted to the new administrator, Gabe, and as sex is not an emotionally driven act for her, she has no problem propositioning Gabe.

Gabe is initially presented as nerdy, all but legally blind without glasses, considered a mutt amongst the paranormal creatures while Loren is a second and the Council representative for all Valkryies. He believes he is out of Loren’s league but when he finds out that she is just as attracted to him, they both have problems keeping their focus on the dig site.

Gabe’s hesitant but eager thoughts are charming in a genre peopled with Neanderthal alphas. It certainly set him apart. Loren’s unaffected acceptance of her own sexuality was also a relief. Despite Gabe’s ostensible nerdiness, it was repeatedly made clear that he was hot and fit with big feet and matching equipment.

There are some unique twists in the world building. Gabe’s family suffers from a number of genetic defects. His mother and sister have only three healthy limbs. Gabe suffers from macular degeneration and in shifted form is nearly blind. Thus he rarely shifts and denies himself the joy and pleasure of being in his wolf form. The implication is that the genetic defects are the result of centuries of inbreeding.

The momentum of the story is primarily driven by the romance and an external conflict having to do with aliens from outer space discovering Earth’s rich natural resources and attempting to lay claim to the territory. The alien technology is quite advanced and I wonder how the Earth based supernaturals will be able to prevail without their own Will Smith. The romantic conflict partly relied on interspecies misunderstandings. Valkryies have a more sanguine view of sex whereas wolves mate for life. There is a small gender reversal. Lorin feels comfortable about sexual relations but the emotional component makes her uneasy and off balance. Gabe, on the other hand, more readily accepts the emotional developments that arise between the two.

Problematically, “Chase Me” ends with no resolution to anything other than Gabe and Loren’s romance. While many other series are ongoing, often there is a core conflict that is resolved while an ongoing story arc carries us throughout the series. In “Chase Me”, the mysteries remain unsolved and the plot threads are left dangling. There are unresolved story lines from the first book that are discussed in “Chase Me” but have no resolution. “Chase Me” assumes that you’ve not only read the first book but that you’ll read the remainder of the books to find out what happens next. It is not identified as a second in a trilogy, but just one entry in a long connected series of books. This sort of uncertainty and non conclusiveness doesn’t drive me to read more because I’m uncertain how long of a commitment I’ll need to make to be given a reward of finality. C+