REVIEW: Caught Up in You by Roni Loren

KatiC+ ReviewsBDSM / Berkley Trade / Erotic-RomanceComments Off on REVIEW: Caught Up in You by Roni Loren 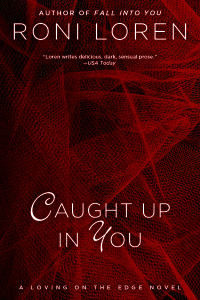 Kelsey LeBrock is a pastry chef. Or, she wants to be. To achieve this goal, she works at a local diner where the owner lets her bake and serve her creations, and she waits tables. The highlight of every day is when Wyatt Austin comes in. She gets to flirt with the good looking businessman, and he gets to covertly ogle her ass. On the weekends, she works as a Domme at The Ranch, an exclusive BDSM club. She’s working towards being a full time trainer at the Ranch, but must complete Submissive training in order to do it. After a close call a year before with a man who almost raped her, Kelsey is very reluctant to give up any aspect of control to do the Submissive training. She’d rather stick to being a Domme. Her life is definitely turning around after a youth spent making lots of bad choices, including dating a drug runner who she helps to put in jail. One day while at the diner, the brother of the guy she put in jail accosts her, and Wyatt helps her escape. Kelsey immediately realizes she’ll have to move. She can’t risk being on the radar of the gang selling drugs.

Wyatt has his own problems. Ever since his brother, Jace, went off to start up his own business, Wyatt is the heir apparent to his father’s company. Wyatt is an introvert, and really dislikes schmoozing clients, but his father is insistent that he go away for the weekend with a perspective big account and land it. Wyatt will need a date for the primarily social weekend, and decides that Kelsey would be the perfect person to go with him. He offers her an obscene amount of money to escort him, and tells her no strings attached, just companionship. Kelsey, being a straight shooter, lets him know that she’s as interested in him as he is in her and that she thinks they should have a sexual relationship. She makes him a deal, she’ll go with him on the business trip, and he’ll help her complete her Submissive training. Wyatt is taken aback. He hasn’t really practiced BDSM since college, and isn’t sure that the life is for him. But he knows he wants Kelsey and he knows that he wants to dominate her. So he agrees.

There’s a lot to like about this book. Kelsey is an interesting character. Young and vulnerable, having had a rough life of her own making, and determined to make life better for herself. Wyatt is a more stock character. He’s dominant and bossy and of course, fantastic in bed, and slips right back into his role as a Dom without really ever skipping a beat. He’s got all of the protective instincts that most alpha romance heroes have, and he definitely displays them. But they have a nice chemistry, and have several extremely steamy love scenes. The tension in the book comes from whether Kelsey, unlike all the other women Wyatt has been involved with, will be able to accept that his work is his life and the question of whether Kelsey’s past will come out and embarrass Wyatt. Given that Kelsey is completely honest with Wyatt about her past, this “issue” isn’t really that big, nor does Kelsey seem particularly worried about Wyatt working so much. The end result is that the conflict within the book felt manufactured and weak.

While I enjoyed reading the book, I felt that the story could have been punched up quite a bit. There was very little that was unexpected or unique about the story. But it certainly entertained me for the few hours I was reading it. I still really like the series, I just didn’t think this was the strongest entry. For that reason, I’m giving Caught Up in You a C+.