In a recent comment thread about reading and writing multicultural characters, you talked about your latest Harlequin Presents release, which features a half-South Asian hero. I was intrigued and interested to read about someone who was neither a Maharajah nor a Bollywood star. My reaction to your story turned out to be quite mixed, but not in the ways I might have expected. There were aspects of the book I absolutely loved and there were others I found intensely frustrating. 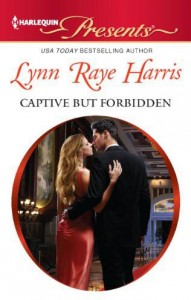 Veronica St. Germaine is the beautiful, blonde, recently elected President of the economically disadvantaged country of Aliz. Aliz is located somewhere in Harlequin/Mills and Boon’s Europe, where the winters are warm, the beaches are unspoiled, and there are dozens of principalities to provide royal families and romance. Veronica, a former party girl, has turned over a new leaf to lead her country to democracy, prosperity, and the rule of law, but someone wants to stop her.

Enter Rajesh Vala, formerly with Special Forces, currently head of his own internationally successful security agency. As a favor to Veronica’s good friend Brady, Raj assumes the role of bodyguard and tries to determine who is threatening her. Unsurprisingly, these two gorgeous and sexy creatures are immediately hot for each other despite their mutual antipathy. But as they learn more about each other, their purely physical attraction deepens into an emotional connection.

Raj pulled off his glove and put his fingers against her cheek. She turned to him, her eyes filled with tears. His fingers were wet and his heart constricted at the pain on her face.

“I don’t want to talk about this with you,” she said, her voice barely more than a whisper.

“I’m sorry,” he said softly. He didn’t want to push her, and yet he had to know. “But it could be important.”

She closed her eyes, shook her head slightly. Her platinum hair gleamed in the dim light, and he thought of her last night, standing by her bed and calling for him. How vulnerable she’d looked, how innocent. Such a contrast with the woman he’d gotten acquainted with on paper.

Her chin dropped, as if she were surrendering. He found a box of tissues in a nearby compartment and handed them to her. She snatched a few into her hand and dabbed at her face.

“How can it be important?” she finally said. “No one really knows about it.”

“Someone does. Andre does.”

She sucked in a breath on a half sob. “Of course he knows. He was the father.”

The sexual and emotional tension in this book is absolutely gripping and reminds me exactly why I come back to the Presents line over and over. They are a terrific couple. Even when they’re at odds, they simmer. The scene where they both finally give in to their passions is moving and satisfying, and both characters’ feelings are depicted equally skilfully. I wondered if the payoff would live up to its promise, and it did. After that point, the external and internal conflicts are sufficient and credible enough that there’s no Big Mis or TSTL behavior needed to keep them apart until the last pages.

The characterizations, however, frustrated me repeatedly. Surprisingly, I found Veronica the most problematic. She’s supposed to be the president of her country, but she spends most of the time thinking about her personal issues, not the threats to her safety and her nation. I understand that this needs to be foregrounded, but I found her utterly unbelievable as a political figure. There’s nothing on the page to show me what her people saw in her. In recent history we’ve seen young, inexperienced women become heads of state because of their family bloodlines and then go on to surprise everyone. I would have liked to see this character reflect those experiences. As it was, she could have as easily been a famous person with a stalker. I found Veronica’s personal issues more believable and authentic, and when the focus was on those I was more wrapped up in the story.

Raj was a more credible character, both as a powerful security guard and as a man with a traumatic past. He didn’t seem particularly Indian, which is hardly surprising since he didn’t have any exposure to Indian culture and society until he was an adult. He was basically an American who eventually reconnected with his Indian heritage, although not with any of his Indian relatives. This is far more common in romance novels than in actuality, but that’s par for the course. It’s tough to have a lone wolf hero if he’s surrounded by Aunties telling him what to do. Raj was described a couple of times as wild and untameable, which I found odd, since he came across to me as someone who deliberately repressed emotions and was afraid of spontaneity.

I did flinch, more than once, at the use of the term “exotic” to describe Raj. It wasn’t enough to make me stop reading, but that word should be banned unless we’re talking about endangered species. A human being might be perceived that way on a first impression, but once you get to know someone, let alone fall in love with them, that word use can too often signal objectification and/or fetishization. It’s not a compliment. My complaint is not limited to this book, so please, authors and editors, do a search and replace and get rid of it.

This is a tough book for me to grade. I loved the romance. I thought the depictions of the characters’ pasts and emotional baggage was well done. But there were weaknesses that I couldn’t overlook. The grade splits the difference. Overall, I’m glad I read the book and I’ll be looking for more by this author.