REVIEW: Canyons of the Night by Jayne Ann Krentz

My favorite thing about your books is the interaction of your main characters and your dry wit that seeps through the dialogue.  “Canyons of the Night” is set in the same world as the Jayne Castle series that involves glowing green alien artifacts, rezzed amber, and dust bunnies.  The idea behind this world is that there are different talents out there – individuals who have extrasensory skills.  Charlotte Enright, for example, can tune an artifact so that it harmonizes with the the recipient’s auras.  Slade Attridge served for a Federal Bureau of Psi Investigation but after a particularly bad case, Slade believes that he is suffering psi-blindness which will inevitably result in the death of his psychic abilities.  For a psy enabled person, that is akin to losing a limb and for Slade, who relied on his psychic abilities in his work with the FPBI, it is a compounded tragedy. 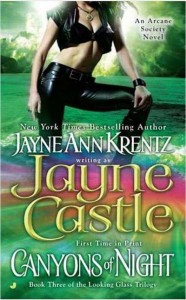 Charlotte and Slade grew up on Rainshadow Island. Slade was a slighter older, slightly dangerous teen who saved Charlotte one night and took her into the Preserve, a dangerous and mystical place.  Both have gone on to success. Salde achieving agent status with FBPI and Charlotte using her aura reading talents to ferret out some of the best antiques.  Fifteen years later, they reunite on Rainshadow Island where Charlotte takes over her deceased aunt’s antiques shop and Slade takes up the interim sheriff position at Rainshadow for 6 months until he goes psi blind or recovers.

Initially, they embark on an affair, knowing that it is only temporary.  In classic Krentz style, the first sexual encounter is a bit disastrous.  I don’t know if there is an author who does a better job of using sex for comedic effect.

There is an overweaning feeling that Charlotte and Slade are destined for each other.  At one point, Slade thinks that Charlotte’s return to Rainshadow Island  is as if she waited for him, a forgotten child raised in the system.   I wished for more character development.  In fact, one of the biggest problems I have with this blend of paranormal and contemporary is that I feel time that could have been spent on character interaction, witty banter, and development was spent on the world itself.  Sadly, the world isn’t one in which I have a keen interest.  Yet the characters themselves keep me coming back.

The pacing of the story is a bit slow.  The first half introduces us to Rainshadow, hooks Slade up with a fatherless boy, and displays the charming nosiness that occurs in small towns while the latter half is devoted to a suspense plot involving Charlotte which allows Slade to put his investigating and sheriffing skills.

HANK LEVENSON TOSSED THE HEADLESS, TAILLESS FISH onto the scale. “Lot of expensive Amber River salmon for one person to eat. Planning on sharing with the dust bunny? I can always sell you a smaller piece of the salmon and give you some cheap bottom fish for Rex. Doubt if he’d know the difference.”

Slade leaned one arm against the glass display case and contemplated his options. There was no point trying to finesse the situation. The news that he’d had dinner with the owner of Looking Glass Antiques would be all over Shadow Bay by tomorrow morning, no matter what he did.

The other issue was that this was advertised as Book 3 in a trilogy. That means, to me, the book should wrap up all the loose ends.  Instead it reads like a set up book for further arcane books. For instance, the mystery of the Preserve is never fully revealed and it is clear that there are more stories to take place which will involve the Preserve.  This isn’t to say that I don’t want more arcane books but just that I thought Book 3 signalled the end of a trilogy.  C+