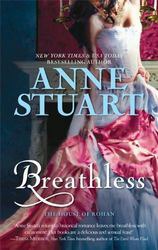 An Extremely Short and Not So Sweet Review of Anne Stuart’s Breathless in Five Limericks Preceded by a Very, Very Short Synopsis

Miranda Rohan, true to her parentage, ruined herself with one bad decision. Though she’s happy in her life away from the ton she feels something lacking in her life. Lucian, Earl of ItTotallyDoesn’tMatter, is out for revenge against the Rohans. Not satisfied with the ruin of Lady Miranda, several years ago, he’s determined to cause her family more pain, even if he has to destroy her in the process. But Lady Miranda isn’t the woman he thought she was. In fact, she’s delightful. Now he has to choose between finally getting his revenge and a life he never expected he could have.

Dear Author, your history was lacking.
The plot, on occasion, was flagging.
Still, despite all the crimes,
of your the hero at times
He really was rather lip-smacking.

Miranda, mother Rohan has failed,
to teach you what she learned so well:
that a man in a mask
is just a rascally ass,
Manipulative, and vengeful as hell.

Lucian, you big giant fool,
After all that has happened to you,
You ought to you rethink
Your vindictive hijinks
And perform some grovelling moves.

For Rohans, the world ain’t so easy.
You’d think with their looks it’d be breezy.
Yet, all that they do,
Is turn gold into poo.
Its a wonder they find a main squeez-y.

In conclusion, I’d just like to state
that this book wasn’t so great.
While it seemed so to me,
You may not agree,
And thus spark some online debate.

This book is probably a B- for Anne Stuart fans and possibly a C+ for non-fans or people who have better morals than the hero.