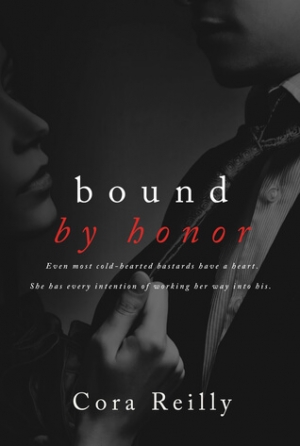 A friend of mine recommended this book to me. I read it and bought the rest of the series so obviously it was a good recommendation. This is an old school HP type category romance set in the mafia world.

At fifteen Aria Scuderi, the eldest daughter of a big mob family in Chicago, is promised to Luca Vitiello, the soon to be leader of the New York Cosa Nostra. At eighteen, she has to fulfill that pledge. To say that Aria dreads this marriage is a mild descriptor.

She’s afraid of Luca. She’s afraid of marriage. She’s afraid of being enmeshed in the dangerous family business for the rest of her life but as the title suggests, she’s bound by the family honor. She has to go through with the marriage or her mother, sister, and younger brother will all be imperiled. For Aria there is no escape.

She secures an agreement from Luca that he will not attempt to sleep with her until she’s ready. This follows a fairly predictable path. Luca, of course, cannot keep his dick in his pants while he’s leaving Aria alone.

The world view within the mafia reaffirms outmoded tropes such as purity for women, their particular role within society (shop and keep the home), and the loyalty to the family. In some scenes, it is archaic such as when the sheets of the newly married couple are inspected to assure that the property traded between the families was pure (aka Aria was still a virgin) and in many ways the world that was built up around Aria and Luca within the story was almost like reading a historical at times. Long time readers of historicals will smile wryly at the way in which Luca and Aria solve that particular problem.

I know many readers were put off by Luca’s behavior, but for me it fit the story. He was cold, murderous and monstrous. He had been raised to be the head of a notorious crime family. That he showed even the slightest bit of give when it came to Aria gave me hope for her in the future. And when he came to trust her in a way that he had never trusted anyone, not even his own brother to whom he was closer than anyone, it was a sign of his great love.

However, I understand how it can be read differently. That Aria was an abused daughter, transferred to a cold, unfaithful husband, and bound into a lifestyle she’d like to escape.

But for me, I thought that the brutal world that was depicted fit the characters was well done and it rang a bit of the old time historicals. Luca, being cold and autocractic, reminded me a bit like a powerful Duke who been groomed from birth to power. And Aria knew where her duty lie–not just to her family but to all the families who depended on this marriage for a peaceful alliance between the two groups.  She’s forced into this position at a young age like many historical heroines.

Unlike her sister, Aria would not flee a marriage she did not want. She sucked it up and did her duty and she fought for space and position within her marriage in a way that was consistent with her personality and the world in which she was raised.

Probably the biggest problem I had with the story was how it was resolved at the end. I felt that there wasn’t enough closure for all the characters and the plot lines and that the grovel by Luca could have been extended far beyond what was included. It’s category length and the abrupt ending showed. In sum, though, if you like over the top Harlequin Presents-style romances, this is a good fit. C+