REVIEW: Blood of the Demon by Rosalie Lario

I requested this book from NetGalley based on the blurb over at BookPushers by MinnChica.  This is an Entangled Pub book and the first that I’ve read from this Press.  It looked like a very professional product.  The epub was nicely formatted (with chapters and everything!) and didn’t have any glaring editing errors. 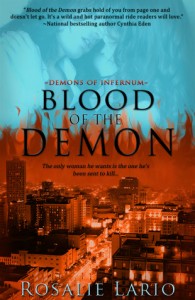 My biggest complaint is that the story felt light in both the worldbuilding and the romance.  It could be because this is the first of four books and thus suffers from being the setup book.   The series is about four half brother demons who work on behalf of an interdimensional consul to track down an evil scientist who is looking for the Book of the Dead.  The evil scientist Mammon happens to be their father who has tried to sire the perfect army of heirs by capturing different gifted females – which gives rise to the “No Paranormal Left Behind” tag. It appears that this series will include virtually ever kind of other being from dragon shifters to faeries to blood suckers not to mention demons.  This allows each of the brothers to have their own gifts.  Luckily for him, he’s had four sons. Unluckily, he’s a sadistict SOB and his sons hate him.

The Book of the Dead is rumored to give the holder of the book the power to control the undead. The book can only be read by a direct descendant of the creator of the book.  The four brothers are searching for both the book and the heir, but their attention is focused on the heir.

Brynn Meyers is the heir. She does not know this, of course, and when Keegan, the eldest shows up, she has a hard time swallowing his tall tale. Shapeshifters? Interdimensions? Demons?  She gets over her disbelief fairly quickly because Brynn has always had special powers of her own.  She has known she was different and now she sees she is not the only one.

Keegan’s brothers are urging him to kill Brynn.  She is the last of her line and Mammon cannot use the Book of the Dead if there are no living descendants.  Kill Brynn and save the interdimensions from apocalypse.  Of course, Keegan can’t kill Brynn.  He isn’t the only brother balking at this.  Dagan, one of the younger brothers, has taken himself to a bar so he isn’t in the apartment complex if there is killing to be done.  Keegan, unlike Dagan, is attracted to Brynn and he begins to search for an alternate conclusion.

Brynn and Keegan initially fight their mutual attraction and this provides some tension over the first half of the book.  Unconsummated attraction can be hotter than sex scenes and it works well here.   I liked the brother dynamic in the story.  Keegan and Taeg were often fighting and while Taeg thought Brynn was hot, he was all for killing her for the good of mankind.  (Not that Taeg is heartless, but more pragmatic).

There is a good amount of focus on the relationship of Brynn and Keegan.  Part of their relationship is built on instantaneous attraction and part of it is forged in intense circumstances but it still worked for me for the most part.  There isn’t a lot of relationship building nor is there a lot of character development.  This book was largely driven by the search for the Book of the Dead, a solution to not killing Brynn, and the collapse of the barriers between Brynn and Keegan being together.

This book is about 74,000 words and I mention that because as I stated in the beginning, it felt light or short.  I think part of this is due to the many different points of view in the story.  We get POV scenes from Brynn, Keegan, Taeg, Ronin, and Mammon.  There may have been a couple of other characters who had short POVs as well.  Because of the POV shifting, I didn’t feel like I had enough time to really fall into one character or another.   The worldbuilding consisted of Keegan explaining to Brynn the interdimensional structure and a few fist fights culminating to a big boss fight at the end.  The wind up of the suspense also seemed brief.  Having said that, I enjoyed this book and anxiously waited to be approved for book two, Mark of the Sylph.  C+