Warning: this review contains spoilers from the last book, which are central to the plot of this one.

The cliffhanger to your second Parasol Protectorate book, Changeless, definitely worked its storytelling magic on me, and by the time Blameless was released, I was still dying to find out what happened. It is, I think, a particular strength of this Gaslight Fantasy series that despite it not being Romance, its rhythm is set to the evolution of Alexia and Conall's relationship, courting readers across genres. The first book revolved around their courtship, the second around their marriage, and this one around Conall's potentially unforgiveable response to the seemingly impossible child Alexia carries. Consequently, the tension around this relationship carries much of the emotional weight of the books, and when it's taught and dynamic, the story sings. When it sags, as it did for me in Blameless, it drags everything else down with it. 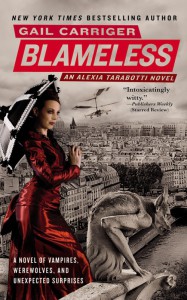 Blameless begins soon after the events of Changeless, specifically Conall's rejection of Alexia and their child in the most boorish, emotionally devastating terms. Alexia, having moved home and struggling to adapt to her appetite-killing "infant-inconvenience," is angry and emotionally spent. After another blow – being fired as muhjah, aka one of Queen Victoria's super-secret supernatural advisors – Alexia simply "wanted to retire to her room and crawl back under the bed covers in a tiny – well, not that tiny – ball." This reaction is so unlike the normally practical, "take the bull by the horns' Alexia that it is clear that her soulless condition has not left her heartless. But her normal rationality has also not yielded a solution to her current problems, which grow even more serious when she escapes to Lord Akeldama's home only to discover that the rove vampire has himself mysteriously fled town with his drones in tow. And then there are the killer ladybugs . . .

Conall, in the meantime, knows nothing of Alexia's increasingly perilous circumstances, as he is spending days upon days drunk on the formaldehyde Professor Lyall uses to preserve various specimens in his lab (aka "crunchy pickled snack[s]" to Lord Maccon). Incoherent and out of commission, Conall has inadvertently left most of the pack management duties to Lyall, who is summoned, along with former Maccon pack claviger (and current newlywed husband to Ivy Hisselpenny) Tunstell, and veteran Tarabotti butler Floote, to Madame LeFoux's eccentric hat shop/laboratory. Alexia, it seems, is the subject of a vampire extermination mandate, and with Lord Akeldama gone and Conall drunk and belligerent, Alexia's safety (and that of the infant-inconvenience) is urgent and challenging.

Questions regarding her seemingly inconceivable conception are almost equally pressing to Alexia, as she hopes she can convince Conall – "that untrusting nitwit!" – that the baby really is his. For both of these priorities, Italy and the Templars, with their strange experimentation and research on soullessness, seem the best option, except to Floote, whose experience serving Alexia's father has left him with certain stores of knowledge he is unwilling to share. So off Alexia, Floote, and Madame LeFoux (disguised as a man, naturellement), head to Italy, leaving the shop in the questionable hands (and taste!) of Alexia's best friend, Ivy.

Conceptually, Blameless is the perfect follow-up to Changeless, with Alexia and Conall's estrangement allowing Alexia to look into her own family and species history, opening up space for other characters to emerge and develop further (Lyall, Madame LeFoux, Tunstell, Floote, Ivy, and, in a surprising turn, Lord Akeldama's favorite, Biffy), and setting the stage for a kooky, hurried road trip across England, France, and Italy. More gadgetry is introduced here, too, building out the steampunk elements of the series, and the dry, droll humor characterizing the first two books is very much in evidence in Blameless, as well. So with all this, why was I disappointed?

Possibly because there was all that cramped into a book that seemed much shorter than its 350+ pages (it clocked in for me at fewer than 300 as a digital book). There are gadgets and chases and epiphanies (at some point Conall has to sober up and pull his head out, after all, so he can go after his wayward, and clearly faithful, wife) and scientific theories on soullessness and preternatural-werewolf babies, and Alexia's need for tea and appreciation of French croissants, and many more small and large curiosities and obstacles and dangers to keep the story moving. What there was not enough of, for me, was the kind of emotional depth I was hoping for after reading Changeless.

Let me clarify, first, that I am not referring to romantic depth. Although I did feel that Conall's drunkenness and the separation between him and Alexia was a too-convenient (and too conveniently resolved) plot device, I have not been enjoying this story purely for the fun of Alexia and Conall's growing attachment (and the consternation both experience at the appearance of their finer feelings toward one another). But a series like this – one that has a somewhat Wilde-ish quality of life imitating art and appearance for its own sake – has in it the danger to become a mere gimmick, and at the end of Changeless I was feeling very much like the gimmick might outweigh the kind of emotional resonance necessary to carry an extended progression of adventures for these central characters.

And there is more depth in Blameless, especially in terms of Alexia's character growth relative to her pregnancy. I hesitate to suggest that the baby softens her, although at times it seemed like that's exactly what was happening, but I will say that having so many vampires and scientists taking a rather unnerving (and potentially lethal) interest in her makes her more circumspect about her current condition. Of course this occurs in a decidedly Alexian way:

Another thing had also become apparent. As driven as she might be to prove Conall wrong, the fate of the infant-inconvenience was now at stake. Alexia might be frustrated with the tiny parasite, but she decided, after contemplation, that she did not, exactly, wish it dead. They'd been through a lot together so far. Just you allow me to eat regularly, she told it silently, and I'll think about trying to grow a mothering instinct. Won't be easy, mind you. I wasn't ever expecting to have one. But I'll try.

Even Ivy begins to show depth beyond her "dark curls and big eyes and ridiculous hats." As she wisely points out to Professor Lyall:

"The great advantage," she said, "of being thought silly, is that people forget and begin to think one might also be foolish. I may, Professor Lyall, be a trifle enthusiastic in my manner and dress, but I am no fool."

Alexia, as we know, does not suffer fools much at all, which may explain in part her growing friendship with Madame LeFoux. While the Sapphic potential of that relationship was flirted with in the previous book, here it is made clear that Alexia is not comfortable with anything past platonic companionship. Still, the relationship has its own poignancy, especially when her friend puts a comforting arm around her shoulders, reminding her how little physical comfort she grew up with and how long it had been "since anyone touched her with genuine fondness." This more emotional aspect of relationships, even among supernaturals and preternaturals, is reflected in a very interesting sequence of events involving Lord Maccon, Lyall, Tunstell, and Biffy later on in the novel. It is a somewhat significant spoiler, so I will not expand on the details here, but it was, for me, one of the most authentically connected sections of the book.

As the series progresses, I will need more of these connections among and between characters to feel engaged. Witty ridiculousness can be very seductive and entertaining, but when a series amasses a thousand pages or more of narrative, those superficial pleasures need some sort of grounding to sustain themselves, and the series has already provided for this in its construction around the stages of Alexia and Conall's relationship.

Not that there isn't plenty to enjoy and divert here: the Templars are fascinating in that they help us understand what a soulless state signifies to someone deeply religious (think Monty Python meets the Knights Templar); there are some spectacularly well-fitted and innovative ladybug assassins; a particularly idiosyncratic and annoying dog accompanying a particularly idiosyncratic and chilling member of the Order of the Brass Octopus (from whence Madame LeFoux comes, as well); and various mild amusements arising from Lord Maccon's boorish and necessarily painful awareness of the need to publicly grovel to Alexia if he has any hope of winning her back. As I said earlier, the convenient timing, both of his stupor and his sobering, felt somewhat heavy-handed (especially since his only indication character growth is embodied in his inevitable acceptance of Alexia's faithfulness). But I still managed to complete the book in two sittings, which speaks to its affable readability.

Still, I am hoping that the next installment, Heartless, will offer a bit more substance to further ground the superficial amusements of the series thus far. Alexia may be robust in her soulless state, but for me, as a reader, a long-term series won't be. C+

Digital pricing is by the publisher.