REVIEW: Beyond Control by Kit Rocha 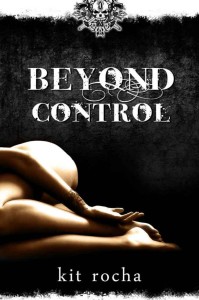 This is the second book in your post apocalyptic series. My main problem is that the two main protagonists are in a power struggle, but I’m not sure what their efforting toward.

Dallas and his gang of O’Kanes built Sector Four into a formidable territory outside the walls of the protected land called Eden. Inside Eden is medicine, tech, and plenty of goods.  But is also a place of rigid societal structure and oppression.

Sector Three was crushed in the previous book and the power vacuum that is left is making everyone in the outlying territories uneasy.  Dallas is called to a meeting of the Sector heads.  Meanwhile, within his sector the equilibrium is shifting.  Lex, his long time companion and love, is challenging him in ways he doesn’t understand.

The first two thirds of the book addressed the commitment dance between Dallas and Lex and because the two were so head over heels for the other, it was frustrating for me to understand why their communication issues were keeping them emotionally apart and sexually frustrated.

They were so obvious in their utter devotion to each other that it was hard to understand why they were so unsure of the other’s feelings.

Dallas wanted complete control and Lex wanted to give it to him. In this story, having both POVs made the suspense of the relationship hard to understand.  Later it seemed that Lex wanted to give control to Dallas with the understanding that ceding control in the bedroom shouldn’t diminish her ability to be in control outside of it.  Dallas did not appear to understand that Lex had built Sector Four along side of him.  I wasn’t entirely sure if it was myopia or misogyny on Dallas’ part.

Dallas wasn’t as foreseeing as I expected a Sector King to be. Others around him maneuvered his pawns for him in a way that made Dallas appear a little weak. He was good at reading people but I didn’t see what made him a leader.  At one point he refers to himself as crazy or insane but I didn’t see the capricious characteristics of that type of person either.  He did seem power hungry and  that thirst for more control may have come instinctively and it may have also welled from a desire to protect those in Sector Four.

Dallas’ conflicting emotions were interesting but I didn’t feel that they were as fully fleshed out as they could have been.  Lex plays the role of the O’Kane den mother; always trying to help those, particularly women, find a safe place.  She had been raised as a courtesan in Sector Two and escaped the cunning leader. Her exploits are retold as if she was a living legend.

Toward the latter part of the book, I thought I understood the power struggle. Lex wanted to sit next to Dallas, not at his feet.  She wanted to sit next to him because she earned his respect, like he had earned hers, because she had built Sector 4 as well.   But the reconciliation suggests that the power struggle was something different. For me, it wasn’t enough that he said he loved her.  The pain Lex felt was his confusion over what she wanted because her being his equal didn’t enter this mind.

I also wondered at their sexual preferences.  Lexi seemed to like a more polyamourous relationship while Dallas wasn’t much into sharing. It seemed like a bad match at times.

But those issues aside, I did enjoy the eroticism of the story.  It’s very sex positive and female positive.  It showed  women in different stages of power and in different acquisitions of power.  I liked the ambivalence of people’s emotions.  That felt genuine; however, I didn’t know if I was really understanding the text of the story or overlaying my own perceptions which may or may not have been accurate.

In a conversation with Avery and Lex, there is some hint that the story is to be read multiple ways:

Avery blinked and turned to meet Lex’s eyes. “He won’t,” she replied just as quietly. “He’s not a perfect man. But I’ve seen my house sisters go to men who work them or hurt them, who call them whores and break their souls. Gordon wants a pretty girl in his bed and someone to dote upon. How selfish would I be to ask for more in a world where so many have nothing at all?”

“Maybe more isn’t selfish at all. Maybe it’s what you deserve.”

“Deserve?” After an uncertain moment, she looked away. “I don’t like to imagine a world where we all get what we deserve. I think my heart would break to imagine most people deserve what they have gotten.”

In sum, this book really made me think. I’m not sure what conclusions I would draw a second time around.  In truth, I wished that there was more world building and character development and fewer sex scenes.  C+