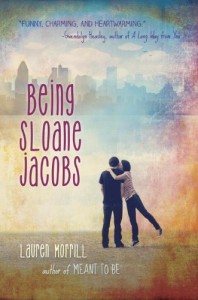 When I picked up your novel, I somehow managed to misinterpret the back cover copy. For some reason, I thought the two heroines were twins separated at birth who randomly meet and switch places. No, I have no idea why I had The Parent Trap stuck in my head. I quickly realized my mistake but kept reading anyway. I’m glad I made that choice.

Being Sloane Jacobs is about two girls who share the same name: Sloane Jacobs (surprise). Sloane Emily Jacobs is rich and privileged. She’s the daughter of a U.S. senator. She’s a former figure skater whose mother is pushing her to make a great comeback. By contrast, Sloane Devon Jacobs comes from a working class family that lives in Philadelphia. She loves ice hockey but has a bit of an anger management problem.

Both girls have things wrong with their families. Sloane Emily walked in on her father getting far too friendly, shall we say, with a member of his staff. Her father, of course, is doing everything he can to make sure she keeps what she witnessed a secret. After all, the political landscape thrives on scandal like this. Sloane Devon’s mother is an alcoholic who got sent away to rehab. She feels abandoned and a large of chunk of her anger on the ice stems from the displaced resentment towards her absent mother.

When Sloane Emily is sent to Canada for figure skating camp, she accidentally runs into Sloane Devon, who’s also been sent to the same city for ice hockey camp. A luggage mix-up due to their names gives them a ridiculous idea. Both of them want to pretend to be someone else for a while. Why not switch places?

I won’t lie and say Being Sloane Jacobs is a deep, meaningful book. It’s not. It’s fun and light. I found it very enjoyable, in no small part because both girls are athletes. There’s a charming scene where Sloane Emily and Sloane Devon compare “battle scars” from their physical exploits and it’s details like that, which stick in my head.

While Sloane Devon initially scoffed at figure skating, I like that she realized immediately it’s hardly a cakewalk and is far more than just looking pretty on the ice. There’s a part of me that’s a little disbelieving about her mindset. I mean, I’m not a figure skater. I can barely roller skate. But I can tell that is a hard sport. Not only do you need the grace and flexibility of a ballerina, you need the strength to generate enough speed to jump. Never mind landing without falling. It’s obvious the amount of physicality involved. But I guess I can accept her attitude. Sloane Devon is a tomboyish jock at the start of the book. If she’s used to the rough play of ice hockey, I suppose I can believe she’d think that about “girly” sport like ice skating.

On the other hand, I wish we’d spent more time with Sloane Emily learning the strategies involved in ice hockey and how she learned to play on a team. I imagine going from singles ice skating to a team sport is rather jarring. The novel tries to play it off as Sloane Emily trying to hide her lack of hockey knowledge and just sticking to the basics. But knowing “the basics” doesn’t automatically make you a great team member who knows strategy. Maybe I just don’t know the rules and gameplay of hockey well enough.

Both girls have their own love interests. The romantic subplots were nice enough but I felt that both boys were ciphers. They didn’t feel like fully fleshed out characters, especially when compared to the two heroines. I wasn’t sure I bought that Sloane Emily’s love interest had reformed from his player ways. How do we know that? Because he says so? Sloane Devon’s love interest had a better presented conflict but even so, he came off somewhat flat.

I will say the novel does require a heavy dose of suspension of disbelief. Sloane Emily and Sloane Devon are not twins. They just share the same name. Sloane Emily is the daughter of a prominent senator whose family is always plastered in magazines and newspapers. She used to be a competitive figure skater. It’s hard to believe both girls can just pass for each other with no one noticing for most of the book. Especially when they’re learning new to them sports at the same time. It worked for me but I had to actively not think about this detail.

Maybe my love of female athletes who love sports, or learn to love sports, is clouding my opinion but I liked this novel. I think it’s a good, fast read for anyone wanting fleshed out female lead characters who are both strong and flawed but in different ways, without one “type” being presented as better than the other. That said, the shallowly drawn supporting characters — especially the love interests — really detracted from the book. This is a case where I point to many things I enjoyed but can also say it’s missing that indefinable spark that boosts a novel from good to great. C+