REVIEW: Ballroom to Bride and Groom by Kate Hardy

I’ve read Kate Hardy’s Medicals and Presents novels for years, and the Posh Docs series is on my keeper shelf. When I saw a new novel in the Harlequin Romance line, I was intrigued, because it seemed a good fit in terms of voice and style. 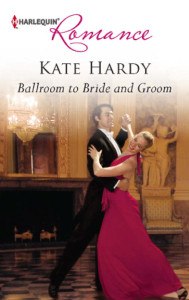 Polly Anna Adams has just been dumped by her fiance, a week before the wedding, and she’s resigned her job on a children’s TV show, left the flat they shared, and is spending her time taking care of cancelling all the wedding details. Her agent gets her an audition for a Dancing-With-the-Stars type TV show, where she is partnered with Liam Flynn, a professional dancer who is returning after 18 months of rehab for injuries he suffered in an auto accident. Liam’s life fell apart after the accident; he wasn’t sure he could ever dance again and his dance-partner wife left him for a new partner. So Polly is shell-shocked and Liam has decided he won’t get emotionally involved again.

Polly’s bright and cheerful personality and always-on smile protects her from showing her true feelings. She perfected the technique after a crisis in her teens (we figure out pretty quickly what the crisis was). Liam sees through it and they develop a tentative friendship as they train for the competition, with an undercurrent of mutual attraction running through their time together. Polly is sure that she is too clumsy and awkward to be able to dance properly, but Liam is persistent and his alternately bracing and sympathetic attitude gives her confidence:

She’d never, ever experienced anything like this. And when he guided her effortlessly round the corners and danced her all the way back down the room again…

‘Wow,’ she said when the song ended. ‘I never thought I’d be able to do that.’

At the beginning of their lesson, he’d had his doubts, too. But she’d worked hard. Made the effort. And, from the look of wonder in her eyes, he was pretty sure that she’d just got what he loved about ballroom dancing. OK, it was tiny, as far as breakthroughs went, but it was a start. Part of him wanted to pick her up and spin her round. But the sensible side of him remained in control. Just.

‘Told you so,’ he said laconically.

It was the first time she’d really answered him back—teasing, confident, and incredibly sweet. Liam couldn’t help responding to the glint in her eyes: he smiled at her.

Polly is appealing and sympathetic, and while she’s a bit of a doormat at the beginning, you can understand why she took the actions she did. She has almost no relationship with her parents, she has a circle of loving and supportive friends. Liam is more of a stock character at the beginning: the ambitious, gifted professional who shuts up his emotions and places everyone at arm’s length until he meets the woman who unwittingly pierces his defenses. The twist here, though, is that Polly is more reluctant to act on their mutual attraction than he is. There’s an utterly over-the-top but lovely interlude set in Vienna, where Liam takes Polly when she is having trouble getting the hang of the waltz. But after a wonderful night together, Polly is the one who draws back, not Liam. Their career plans put them on different paths, and at no point does Polly do that annoying romance-heroine thing of deciding that she’s willing to give up everything for her man.

The first half of the story involves introducing the characters and the dance competition plot. The scenes with Liam teaching Polly to dance and their weekly performances are a lot of fun, although they focus primarily on the two of them and don’t show much of the rest of the competitors (the snippets with the judges are amusing). The second half develops the relationship and deals with the fallout when the details of Polly’s teenage crisis are revealed. The scene where Polly faces her past and talks frankly about what happened is very moving. The last few scenes and the ending, though, like so many categories, feels rushed, and the Big Gesture at the end is one of those that readers either love or hate. Since they hadn’t resolved the believable issues that were blocking an easy HEA, I wasn’t quite sure I could believe the ending. I did believe that they really loved each other, though, which is probably more important.

Since this is in the Sweet line, the heat level is very low. I’m fine with that, but readers who don’t want to stop at the bedroom door will likely be a bit frustrated. I found the repeated use of one word to describe what the French call a coup de foudre to be a bit tiring (there’s a reason we borrow so much from French, as it turns out). I know you can’t explain coup de foudre feelings, and I understood not only why Polly was willing to marry her fiancé without it, but also why he felt something was missing. But the emphasis on Polly’s discovery of that feeling and its importance didn’t quite work for me as written. At a more technical level, there are also a lot of POV shifts within scenes that were sometimes difficult to follow.

In spite of those issues, though, I enjoyed the book. The arcs of character growth for Polly and Liam were believable, and I liked that they were not just falling in love because they were physically attracted to each other but because they liked each other as people. The backstage scenes about the dance training and competition were nicely woven into the romantic progression. And no one was a pure villain, not even the person who triggered the public revelations about Polly’s past. I think the HR line suits Hardy’s voice well, and I’m looking forward to seeing what else she does within it. Grade: C+