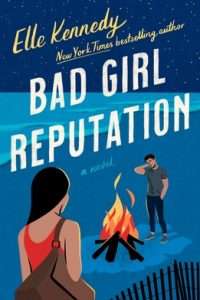 CWs: mildly spoilerish so click at your own risk

Bad Girl Reputation is the second book in your Avalon Bay series and the follow up to last year’s Good Girl Complex. Readers first met Evan Hartley in Good Girl Complex when his twin brother, Cooper, got his HEA with Mackenzie. We knew from that book that Evan had had an on again off again relationship with Genevieve (Gen) West but that Gen had left town without a word and Evan was #notoverit. Evan had been tomcatting around Avalon Bay in an effort to forget her.

When you left, my whole life changed. It would be like if Cooper suddenly disappeared. A huge piece of me broke off and was just gone.”

In Bad Girl Reputation, Gen comes back to Avalon Bay for her mother’s funeral and ends up staying, initially only temporarily, to help her dad in his business. (Even though the book starts with a funeral, Gen and her mother were not remotely close so it’s not as devastating an event for her as it may sound.)

Gen and Evan have this thing where if they’re in each other’s orbits they crash into each other. Sometimes, even a lot of time, it’s good and fun, if a little wild. But the rest of the time it’s destructive. Gen and Evan have been friends since they were kids and the trouble they got into in middle school only escalated as they got older. Gen left town after sinking to rock bottom and realising she needed to make some changes in her life. She drank too much and felt out of control. She had no confidence she could make those changes in Avalon Bay and especially around Evan. Evan tended to encourage her bad behaviour or inspire it. So she left.

Essentially the book poses the question: “What happens when the party girl and the bad boy grow up”?

Evan and Gen are in their early 20s (I couldn’t find their exact ages in either book). Evan has a job working construction with his brother and his Uncle Levi – at the end of Good Girl Complex, the twins have become partners in Uncle Levi’s building business) but he doesn’t have a reputation as being responsible. He raises hell, gets in fights, drinks too much, sleeps around. When Gen comes back to town she makes it clear that she wants to be different and she can’t see being different and being with him at the same time. Evan is crushed. Gen is it for him. He’s loved her for so long and what’s wrong with being “wild and free” anyway? But he can’t convince Gen he’s worth the risk and as the book progresses, notwithstanding their mutual attraction and undoubted chemistry, Gen is determined to be a grown up and stay away from him. Evan begins to realise that maybe it’s time for him to grow up too.

“You know, I always kind of looked up to you when I was a kid.”

“Not so much anymore.”

Ouch. The kid’s full of bullets today. “This unfiltered honesty thing gets a lot less cute when you’re old enough to get your ass kicked,” I remind him.

He has the decency to blush. “Sorry.”

He considers the question for several seconds. Then, with a look of pity that would knock other men out cold, he says, “The bad boy thing gets old.”

The thing is, the book does a great job of showing why Gen and Evan were toxic when they were together. Yes, they loved each other and had great sex but they also had epic fights, split up regularly, made each other deliberately jealous and got into boatloads of trouble (most of it illegal – that they didn’t end up in juvie or jail was just luck). When Gen first comes back and tries dating a “good guy” Evan’s reaction is wildly inappropriate – crashing their date and being truly obnoxious.

When he decides to change his ways to win Gen back he is so clueless he resorts to Google.

Starting today, I’m hella upstanding. Easing up on the drinking. No more fights. I’m officially on a mission of self-improvement, a complete Good Boy retrofit. Which, according to Google, includes volunteer work.

At first Evan’s efforts are part of a plan to get Gen back in his life but over time, I did accept that he started to do it for himself too. His first efforts don’t go well and I had extremely mixed feelings about his brief stint at the assisted living facility. (As an aside: does the US really have no requirement for volunteers working with vulnerable people to have a police check like we do in Australia? They just let anyone have access to old people and children?) There were a couple of jokes in his first couple of efforts at community service which fell flat for me.

But Evan finds his feet with the Big Brother program and after (again) a somewhat wobbly start, he really steps up for his “little brother” Riley.

It’s not just Evan shown in a bad light; Gen’s own behaviours while generally better than Evan’s in the now times, are shown to be very reckless (to say the least) in the before times and there are a couple of examples of “slips” – both associated with Evan – which only serve to fortify her view that they are bad for each other. It’s hard not to agree.

Having done so well setting up the dynamic, I’m not entirely convinced the book made it’s argument that the pair had grown up enough for a HEA. Especially on Evan’s side of the equation. I would have liked more of them both adulting successfully while still enjoying their lives. Gen finds it hard to be her natural vibrant self and be “good”. It’s not so much that I felt that Gen would return to her old ways but I didn’t see enough of her blending those two things together successfully. I was a bit worried she’d lose herself.  In Evan’s case, the changes just felt too new and untested.

I certainly bought into their chemistry. I believed they genuinely loved one another and would continue to do so but I was a little wobbly on their maturity levels as a couple.

There were other things that didn’t work for me. Gen is offered a job she is wildly unqualified for. It made no sense to me and felt risky for any number of reasons.

One character appears in the story merely to be a plot point to bring about the event, which lead to important realisations for Gen and those around her, and just disappears afterwards. A couple of things were wrapped up too neatly.

Cooper, whom I had mostly liked very much in Good Girl Complex was really (and in my view, unnecessarily) mean to Gen at the beginning, trying to be the over-protective older brother. But further in the book they spend time together and there’s no mention of any tension. (There is resolution for them in the epilogue however.)

I did like the developments in Evan’s relationship with his mother and the discussion of his complicated feelings about her and their history.

I felt the pull of Evan and Gen toward one another. I even wanted them to be together. But the story didn’t quite stick the landing for me.

→ Kaetrin
Previous article: Review: Regi’s Goddess (Gods of Misfortune #2) by Lyn Gala
Next Post: REVIEW: The Art of the Cosmos: Visions from the Frontier of Deep Space Exploration by Jim Bell