REVIEW: Back to the Good Fortune Diner by Vicki Essex

I’m always looking for books with unusual settings, and as soon as I saw the cover and title of your book at Harlequin, I put it into my cart. Back to the Good Fortune Diner is aptly named: Tiffany Cheung escaped Everville, New York and her parents’ Chinese restaurant for New York City, only to find herself back in both after a series of reverses. Desperate to make enough money to get back on track with a new job in publishing, Tiffany lives at her parents’ house, works in the diner, and tutors Simon, the son of the gorgeous quarterback she tutored years ago, when the two of them were in high school. Meanwhile, Chris Jamieson is trying to bring his father’s farm into the 21st century by growing exotic organic produce like bok choy while he single-parents Simon and tries to convince him that the path to success lies through a college education. 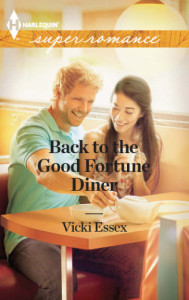 This is very much a story of a small-town girl who escapes to the big city, returns against her will and then discovers that happiness is right there in front of her. What sets this particular book apart is that Tiffany is Chinese-American and a member of what is apparently the only non-white family in Everville. Tiffany’s parents and grandmother dote on her brother, Daniel, who went away to college and business school but came back to live at home and help run the restaurant. Daniel is in a long-distance relationship with a non-Chinese doctor, Selena, which he hides because his parents expect him to marry a nice Chinese girl who will fit into their lives. Tiffany is the black sheep because she got a scholarship to NYU, majored in English, and is pursuing a career in publishing.

Chris left Everville after high school but came back almost immediately when he discovered that his high school girlfriend was pregnant with Simon. When his father lost his leg in a farming accident, his future was determined for him. It’s not his first choice, but he makes the best of it, taking care of his father and Simon and trying to make the farm more profitable. He wants Simon to have more options, but Chris likes living in Everville and doesn’t pine for the bright lights. He initially seeks out Tiffany on Simon’s behalf, remembering little about her other than her smarts and her studiousness. But as she spends time at the farm, Chris becomes more and more attracted and wants to know her better.

Tiffany’s high-school crush on Chris never really went away, but she can’t see how anything can work out between them since she has no intention of staying in Everville and he is tied to the farm and the town. Nevertheless, when romantic opportunity strikes, she grabs it, with somewhat predictable results.

Tiffany’s ethnic background shapes the story in a number of ways. Her relationship with her parents and her brother Daniel reflect the experiences of many Chinese immigrants. Her parents’ expectations, Daniel’s ambivalence about staying at home versus pursuing an independent future, and the tensions between the siblings all create a rich, unusual context for what is in the end a fairly predictable romantic storyline. Tiffany’s sense of isolation from her high-school peers rings true as well, and a scene with a former classmate succinctly captures what those interactions must have been like:

She had no idea who this woman was. She nodded with a helpless, questioning smile in answer.

“Maya…” It was hazy at first, but then she remembered. Maya had been in a few of her classes. Back then, she’d kept her straight, sun-kissed brown hair in a slick ponytail. She’d run with the sporty crowd. She was still fit-looking, but her hair had been cut super short and was gelled into spikes. “Yes. Of course. Hello.”

“I’d heard you’d come home. Are you doing all right? Someone told me you were hit by a car.” She looked her over, beaming. “You look fantastic.”

Tiffany’s awkwardness increased when Maya hugged her. She held herself stiffly in the woman’s light grip.

Other aspects of the book didn’t work as well for me, though. In terms of the romance, a lot of this story is not about Tiffany and Chris together, but rather parallel storylines about their lives in relation to other people. They’re interesting and they help me understand the characters, but they don’t advance the romance. This is a category romance, and the hero and heroine spend time thinking about each other (with accompanied mental lusting), but their actual interactions don’t work to build their romance for me. It takes half the book for them to kiss, and even then it seems to come out of nowhere and they both worry about what they did. And soon we’re back to the individual storylines, except that Tiff and Chris spend time talking or thinking about each other.

I appreciated the way the author portrayed the casual bigotry and racism of some of the characters, especially Chris’s father and Tiffany’s parents. But Chris’s father’s transformation was unconvincing to me. He was sufficiently authentic in his racist behavior that I couldn’t buy his sudden turnaround about Tiffany, and when he turned into the wise old patriarch at the end, I just rolled my eyes. Those kinds of attitudes, whether about race or class or culture, are ingrained and don’t change overnight, in my experience.

Equally problematic for me was the small-town-good, big-city-bad vibe that really took off in the last quarter of the book. As someone who never lived in a small town and for a long time viewed them as kind of exotic, I don’t have as much trouble with small-town idealizations in romance as some readers do. But the resolution to Chris and Tiffany’s conflict annoyed me all the same. For those who don’t want to be spoiled, I’ve hidden my objections below:

Tiffany is offered a job as an editorial assistant at a hot YA publishing house, and she takes it immediately, which sets up conflicts with Chris and Simon. The job is extremely demanding time-wise, but her boss is portrayed as a very nice person and Tiffany seems to have quite a bit of authority in selecting or rejecting manuscripts. She describes it as her dream job. But then it’s not, and she quits after three weeks to return to Everville, Chris and Simon, and the prescribed happy ending. This happens despite the fact that throughout the book she has genuinely loved her time in New York and her career path. The reader is supposed to believe that one conversation with Daniel makes her realize that she doesn’t really want her dream job and career, she wants to be a wife and mother (even though she hasn’t been shown to want these up to now). Meanwhile, Daniel realizes that he really loves to cook and run a restaurant, so he gets a job in a Chinese restaurant in New York City and voilà, the main conflict keeping him and Selena apart is resolved. It really ticked me off that Daniel got to do what he wanted AND get the girl, but Tiffany had to decide her dreams were wrong in order to get the guy. Instead, she’s going to make a career of tutoring in a small town. We never get the sense that tutoring per se (as opposed to tutoring Simon in particular) is all that rewarding to her, so it comes out of nowhere.

I resented that Tiffany had to see her prior self as unsatisfactory in order to get her happy ending. She thought she was deeply flawed and unlikeable, whereas I saw her as human. And I finished the book feeling as if once again, the heroine has to change and choose among mutually exclusive options, but everyone else gets what they want. That’s not my idea of a satisfying ending.

In spite of these criticisms, I’m very glad I bought and read the book. I loved seeing the way that incorporating a non-majority character shaped and changed a number of aspects of the larger context and added in story lines that we don’t always see in the genre. Grade: C+

Note: This book is the January selection for the Smart Bitches’ Sizzling Book Club, so All Romance ebooks is offering a 50 percent eBook Buck Rebate until January 21 (Code: SBTBARE).