Like many other readers of YA novels, I’ve grown somewhat weary of the paranormal and urban fantasy titles in the genre. I want a change and have been trying to find more thrillers and science fiction titles to inject some enthusiasm in my reading blues. That your debut combined these two things piqued my interest. The resulting experience, however, was mixed. 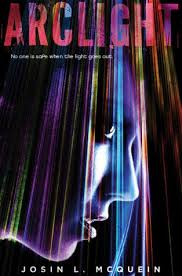 In a bleak future, humanity has fallen. A small pocket of survivors live behind a barrier of light called, fittingly, Arclight. On the other side exist the Fade, the race of monsters that brought about humanity’s downfall. Because of their sensitivity to light, Arclight is the only thing separating humans from the Fade and anything beyond the light is called the Dark.

Marina is a survivor of the Dark. She was found half-dead in the Grey (the in-between place separating the Dark from the Arclight) and brought inside the compound. Theoretically, she should bring hope to a community that’s long since fallen prey to despair. Other humans exist outside Arclight! They aren’t the only survivors! That should re-energize people who think their time has passed.

In reality, she brings nothing but danger. Marina has no memory of her life before Arclight. And since being brought into the compound, the Fade have increased their attacks upon the settlement. Everyone assumes they want Marina back. It’s why her nickname is Fade-bait. The truth, however, is far worse.

Part of me wishes this book were more of a twisting and turning thriller than it actually was. But upon reflection, I realize that was never the point. Arclight is not an action-packed story about the dying days of the human race and their fight against the monsters that brought about their downfall. That plays a part in the novel, of course, but it’s more of a backdrop than anything else.

Instead, it’s a story of identity. Marina has no memory of who she was. This is pretty major. If you have no clue who you were in the past, how will you know who you will become in the future? What direction will you know to take? Depending on your strength of will, other people’s opinions of you can have more influence than they should. Arclight explores these nuances. I think if readers go in with this expectation, this novel will work better for them.

I also think part of the suspense was spoiled for me because I figured out the Big Secret. There are enough hints dropped in the narrative that I think readers can easily piece together Marina’s past. Maybe I’m wrong. But it wasn’t a surprise to me and I think that detracted from the tension I like to feel in narratives like this one. When something intended to be a major surprise turns out not to be much of a revelation, it’s a letdown. That’s always been the kind of reader I am.

I really enjoyed the concept of the Fade. I don’t want to spoil what they are but it was a refreshing change from the same old, same old. They brought a certain creep factor to the novel that I didn’t quite expect. I picked this up expecting a pure science fiction novel. I didn’t expect horror elements. In fact, some bits of Arclight reminded me of Pitch Black, one of my favorite movies. The scenes in which the Fade invade the compound and some of the kids encounter remind me of a John Carpenter film.

Another aspect that I found refreshing was that there isn’t a love triangle. Not a true one, at any rate. How often does that happen in YA novels these days? Instead, I saw the relationship dynamics as an illustration of how feelings and emotions change as a person evolves. I like that, and I wish more YA followed this path more than the well-worn instalove trail.

Despite all the things I liked about Arclight, however, I can only give it a C+. Why? Because despite all the great ideas, the execution is vague. There are descriptive passages where it was difficult to understand what was happening. While the worldbuilding is interesting, it’s also confusing. The Light, the Dark, and the Grey? What exactly do these things mean? I can form a picture in my head of what I think they mean, but I also have this strong suspicion I’m imagining things wrong. I formed no emotional connections with any of the characters, not even the protagonist Marina. A few of them, like Anne-Marie, seemed very cardboard and two-dimensional. Arclight was very much a middle of the road book for me. I don’t regret having spent the time reading it, but I’m not burning for the sequel either.