My previous exposure to your novels didn’t work so well for me but I’m always willing to give a writer another shot, especially if it’s for a different series. I also admit that a couple years ago, I was in the midst of severe urban fantasy burnout. While I’m still jaded on the genre, I no longer flinch at the suggestion of my reading an urban fantasy and I consider this a plus. Besides the first novel of your new series was about magical tattoos and that sounded right up my alley. 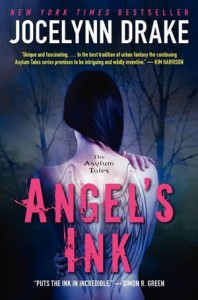 In a world where the supernatural world coexists freely with the human world, warlocks and witches are the top of the food chain. By which I mean they terrorize everyone else and consider regular humans to be little more than animals to do with as they please. A friendly group of people, as you can no doubt imagine.

Gage Powell was raised in the Ivory Tower to be a powerful warlock. (No, seriously, the warlocks have an Ivory Tower.) Except he didn’t like the way they did things and escaped. His choice was not without cost, however. In exchange for his freedom, he can no longer cast magic except in self-defense and lives under constant surveillance.

These days, Gage works as a potion maker and tattoo artist. And for a little something extra, he’ll add a special something to those same tattoos. When a young woman dying from cancer walks into his parlor one night, Gage decides to grant her wish of getting angel wings tattooed on her back. Against his better judgment, he also adds a little magical kick to her tattoo.

Unfortunately, the tattoo has unexpected results and Death is none too pleased. Unless Gage can reverse what he did, his days are numbered. And to make matters worse, his former warlock master is out for his head.

I thought the strongest aspect of Angel Ink was the portrayal of Gage’s relationships with his employees, the troll Bronx and the elf Trixie. They had an easy camaraderie, and I loved Bronx’s matter of fact ways. I guess you could say his personality was stereotypical of a troll character in a fantasy novel, but I liked it anyway. Steadfast and loyal and has your back in a fight. What’s not to like about that?

I also found myself enjoying the attraction between Gage and Trixie. I thought the way they danced around each other was believable. Not only are workplace romances tricky to navigate, the two of them have their secrets. Gage hasn’t told his friends that he’s a warlock and considering the way warlocks are viewed by the general populace, I can’t really blame him. And Trixie is an elf in hiding and Gage isn’t supposed to know that. But once they were past that, I loved how mutually enthusiastic their attraction was.

One thing I wasn’t quite as sold on was the internal strife within the Ivory Tower. It’s not so much that there was conflict amongst the warlocks. I can buy that. A bunch of egotistical maniacs with lots of power? Sounds like a disaster waiting to happen. But the connection between that strife and Gage’s warden, Gideon, going easy on him seemed too neat and pat. Maybe if it hadn’t been revealed so late in the novel, I wouldn’t feel like it was a convenient development.

Speaking of Gideon, I actually wish we’d seen more of his character. For the majority of the novel, we only really saw one side of him with hints at the deeper motivations that get revealed later. But when the complete reveal finally does happen, it seems almost too much, too fast. This just added to the “too convenient” impression.

I’m also a little irritated that Trixie’s dilemma was introduced and not really resolved. I realize this is a series and future conflict needs to be set up, but I already got the idea that there was lots of existing fodder given the piece of soul Gage lost in this book. Without any movement towards resolution, that subplot ended up somewhat extraneous. Was it just for the sole purpose of adding conflict to the romantic subplot and to push Gage and Trixie together then?

I appreciated some of the sly humor in the narrative. Bronx dealing with vampires by throwing mismatched buttons on the floor made me laugh so hard. It’s hard to be a big, bad scary vampire when you stop threatening someone to pick up, count and organize buttons. It’s ridiculous but it ties back to some of the original folklore, which I like.

Overall, I thought Angel Ink was a decent read. It is very much the first novel of a series, intending to introduce readers to the various movers and shakers of its UF setting, but it stands well enough on its own. That said, I think the characters were the strongest aspect of the novel. It’s not a plotless novel by any stretch of the imagination, but it’s not something to jump up and down about either. C+

→ Jia
Previous article: Monday News: Johnny Depp gets his own imprint; ISPs and Copyright megaliths create their own enforcement center; Apple loses in the UK
Next Post: REVIEW: A Touch of Confidence by Jess Dee