JaneC+ ReviewsAngel / Contemporary / ParanormalComments Off on REVIEW: Angel in Chains by Cynthia Eden

I saw a lot of twitter chatter about this book a couple of months ago amongst reviewers. I had a copy of the ARC sent to me by Kensington so I figured it wouldn’t be a big hassle to at least give the story a try. While this is the third in the series, I did not feel like I needed to read the first two. In fact, given that the hero of this story was the villain in the previous two, I might have been more receptive to the character’s placement as the hero in the book. 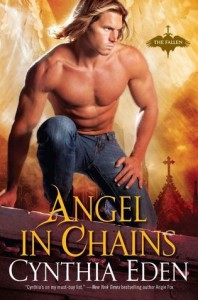 Azriel was an Angel of Death but for some reason not apparent in the beginning, he fell. He is now on Earth, a powerful being with the ability to heal from mortal wounds and kill with a touch but he longs to return above. His desire to return stems not from a love but from a sense of comfort and place of being. Azriel knew duty and death above. On Earth, he feels. He desires, he lusts, he hurts. His newly awakened senses, both physical and mental, are constantly bombarded and he seeks the peace of his previous state.

Jade, a human, is temptation incarnate. He lusts after her but when he finds out that she is being hunted by a pack of Shapeshifters, he believes her protection might be his redemption. He needs to sacrifice, he is told, to return. It’s clear that Azriel’s path toward redemption is unlikely to be what he clings to initially but it provides a reasonable basis for him to hang around Jade.

Being near Jade is dangerous because her former lover is one of the most powerful Shapeshifters in the Southern U.S. He will do anything to return Jade to his arms and he certainly doesn’t want another man defiling her. He has killed lovers of hers before as well as anyone with whom she befriends. He’s truly the stalker boyfriend from hell. I kind of appreciated the villianous portrayal of Brandt, the ex, who believes that Jade is his. This is the opposite of how ultra possessive boyfriends are played for effect in many romance novels these days. Yet, Azriel develops those same possessive feelings quickly. I guess we are to see him as heroic because he will die to have her rather than kill to keep her.

Despite being human, Jade is shown to be a very accomplished fighter. Some of her techniques she has learned from Brandt, the shapeshifter. Others she’s developed being on the run from her ex. Jade’s competence in fighting the paranormals can challenge one’s suspension of disbelief. At times she seems to have better reflexes and fighter instincts than a demon or a shifter.

Az’s fall and his origins are a bit of a mystery. This is one area in which I was uncertain whether more was revealed in previous stories or he was simply an obscured character for effect. Further, given that he’s essentially a newborn when it comes to emotions and feelings, I was disappointed that his sexuality, among other things, came off as someone experienced. I feel like this was a lost opportunity to play up Az’s virginity, in all aspects. He’s experienced at fighting but that was about it but he comes off as knowledgeable about all things.

Foreshadowing is done with a heavy hand. Early in the book, Az’s “brother” tells him that humans could be his downfall and, of course, that is prophetic. The prose is often given over to big, dramatic statements. Because Az’s desire to return above is premised on something other than true belief in a higher calling, it is easier for him to switch courses from salvation to succor in Jade’s arms. The suspensions of disbelief may be hard for some readers to swallow, but I was pretty entertained throughout the book. C+

→ Jane
Previous article: REVIEW: With Everything I Am by Kristen Ashley
Next Post: An interview with Kate Cuthbert from Escape Publishing, Harlequin Australia’s Digital First Imprint