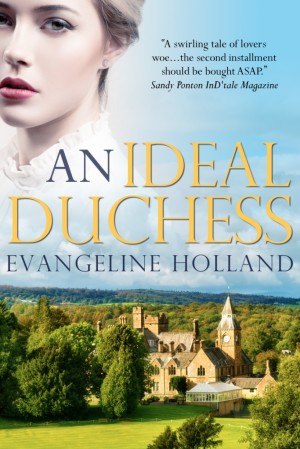 I’ve come across your posts and comments online in the past and knew that your books are set in Edwardian England. Since I’m all for more historicals set in the 20th century, I decided to pick up An Ideal Duchess as an introduction to your writing.

An Ideal Duchess takes place over the span of more than a decade in the early 20th century, and is the story of Amanda Vandewater, a young American heiress who meets and marries Bron Townsend, the Duke of Malvern. You describe it as “set against the backdrop of the rise of aviation, the suffragette movement, and the turbulent years leading up to WWI, An Ideal Duchess is the tale of an idealistic American heiress who must fight for her position–and for love–in the face of the strict adherence to duty over desire, of reputation over understanding, and of clinging to the past over embracing the present. The only question is if Amanda is strong enough to withstand the pressure.”

While I knew that this was the first of a planned two-part set, I some resolution by the end, and I thought that this would be a more romantic story than it turned out to be. Your website characterizes your novels as “romantic historical fiction” rather than pure romance novels, but I can’t say that I found An Ideal Duchess particularly romantic. Instead, it mainly depicts the gradual deterioration of Amanda and Bron’s marriage, and ends with no real resolution to any of the storylines. I enjoyed the scope and setting, but I’m not sure that the story needed to unfold over so many years, sometimes jumping several months or even years in the narrative and skipping over major events.

The characterization of Bron seemed uneven to me. The early chapters hinted at a complex character, but we were only given glimpses of that for the remainder of the story. Bron was not supposed to inherit the title, but the death of his brother forced him into a role he resents and which gradually distances him from others. I can certainly accept that Bron had a lot to deal with and that the circumstances of his brother’s death would affect him deeply, but the transition from the man portrayed in the beginning of the book to the bitter and resentful Bron was both too abrupt and too extreme for me. Perhaps more scenes from his point of view would have allowed for better development of his character and more insight into how and why he changes so much.

This is part of a bigger problem: An Ideal Duchess suffered from a few perspectives too many. While I realized early on that I’d be getting more than the standard hero/heroine POVs, I didn’t really see the need to have the story told from so many perspectives; in particular, I found Bron’s cousin Viola to be both unpleasant and worse, uninteresting, and did not particularly care for his mother, either. Amanda’s maid Maggie and Bron’s friend Anthony did capture my interest, however, and I wouldn’t have minded more focus on them. There were also several minor characters who were suffragettes, but whose appearances were quite brief – too bad. Also, mention of the early days of aviation in the book description intrigued me and I found the few glimpses into this quite interesting, so I’d have liked to see more of that.

Amanda could have been Mary Suish: she starts out as a beautiful, rich, confident, and caring young woman – but there’s enough depth to her that I don’t feel the label applies. She’s baffled by the rigid structure imposed on of her life, confused by Bron’s mixed signals, and has a hard time figuring out where she belongs in the scheme of things. She is constantly judged by her family and the servants: for being American, for marrying into a title, for not knowing the customs or knowing and choosing not to follow them. The realities of her life versus her expectations and hopes going into the marriage are very disillusioning, but she does little to change her circumstances, feeling trapped and powerless. Neither she nor Bron really communicate with each other, so the breakdown of their marriage seemed inevitable. I’m actually not sure if the series is supposed to be about the two of them as the main couple, with some kind of reconciliation in the second part; whether it’s primarily Amanda’s story; or if it’s something else entirely.

I have very mixed feelings about An Ideal Duchess, making it difficult for me to grade. It’s well-written (barring some copy-editing issues), the period is an underused one in the genre and I felt your depiction of it was one of the book’s strengths, and some of the characters were very interesting – though not necessarily the ones that were the main focus of the narrative. But I can’t say that I really enjoyed reading it, and I don’t know if I’ll want to continue and find out what lies ahead for these characters. As a compromise between what I did and didn’t like, I’m going to give it a C+.