REVIEW: An Heir for the Millionaire by Julia James and Carole Mortimer

This two book collection is bound together on the basis that both heroes are named Xander. When I first read the introduction, I thought this was a RIDICULOUS idea and in fact, had written that down in my pre-review notes. How would I keep these men apart? Wouldn’t the characteristics of Xander One bleed into Xander Two when I was reading the second book? Who thought of this??!!?? 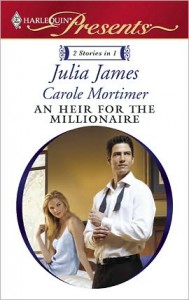 Suffice to say I was wrong and that I not only enjoyed the tales of the two Xanders but recommended it, although primarily to those who like HPs in the first place because these two books aren’t particularly subversive like say The Bellini Bride by Michelle Reid, but entertaining. After all, I did get two books for the price of one.

The Greek and the Single Mom by Julia James

Clare once lived a very glamorous life full of expensive clothes, frequent travel, and a luxurious life. Circumstances, however, reduced her to waitressing parttime in addition to a fulltime job to provide money for her son and the older woman who had become part of Clare’s family. But her circumstances, though reduced, were better than being the discarded mistress of a heartless Greek tycoon.

Four years earlier, Clare was temping and one look from Xander Anaketos felled her. She went to dinner with him and then to his bed and became his mistress. She knew from the start that she should guard her heart but as time went on and Xander still returned to her bed, night after night, she began to think that maybe, just maybe, their relationship was different. Sadly, Clare was fooling herself. While she was dreaming of a happy ever after, Xander was falling for someone else. He returns from a business trip, takes her out to their place at St. John’s hotel and tells her it is over. Clare gets up and walks away and disappears from Xander’s life like a puff of smoke.

In the catalogue of HP stories, the mistress one appeals to me, primarily because these women get involved in a purely sexual relationship (although often this is their first). A mistress often plays the reviled woman and to see the mistress elevated as the female protagonist in a romance novel is enjoyable.

There is high drama in this book, from the scene in the restaurant where Clare is given her walking papers in the form of a diamond necklace to the discovery by Xander of his son. I wavered between agony for Clare, hurt for Xander that he had missed so many years with his son, and disgust at the way he treated Clare. I liked that Clare threw his actions back in his face,

"You're not real,' she said. Her voice had changed. "You're just not real. You actually think I would tell a man who'd chucked me on the garbage pile, who'd paid me off with a diamond necklace, that I was pregnant by him?’

Xander spent his whole life disengaging himself from attachments. He changed his watches, his cars, his yachts, and his women. Clare was his one exception and when he found himself getting too attached, he ruthlessly severed their connection.

The story is compressed and thus, the emotions move quickly from anger and resentment toward lust and something else; however, because the two had a prior relationship, it was believable. The Greek and the Single Mom delivers a lot of emotion in a short time. B

Xander Fraser has a problem. His wife has died and he is left with a six year old daughter. His wife’s father is making noise about challenging Xander for custody.

Casey Bridges is a single mom with a six year old son who lives on the edge of the Fraser estate. They are tied together because Casey’s husband ran off with Xander’s wife and then both died in a jet crash. Xander proposes that the two of them marry so that Casey can provide a better life for her son and Xander can keep custody of his daughter. At first, Casey objects because they don’t love each other but Xander points out how their previous marriages weren’t based on love and this business based proposition is at least more honest:

"How about marrying someone you actually love?'

Ah, a marriage of convenience story. Love. Unfortunately, because of the shortened circumstances, I believed less in the love between Casey and Xander. I felt like that they could have learned to love each other over time, but not in the time frame presented. Both had underwent horrible marriages to unfaithful people and you would think that would have marked them more.

This was more frothy and less emotional than The Greek and the Single Mom so the two together made a nice collection but the marriage of convenience story lacked the believability and verve of the first. C+

→ Jane
Previous article: REVIEW: Skintight by Susan Andersen
Next Post: What are the Best Apps for Book Inventory on the Droid?