By now, one would think that I've had enough of vampires, paranormals and the strange and unusual. One would be way off base. I don't think that will ever happen. It's like assuming a lover of historicals will eventually tire of the rakes, rogues and scoundrels. Sure, every once in a while I need to take a break and read something different, but when I return to my heart's desire, I'm all the more ready for something new and exciting. 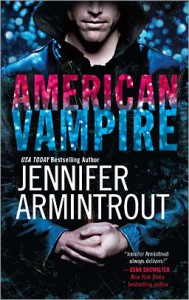 American Vampire definitely started out in the "new and exciting" category. Graf McDonald is a quintessential bad-boy vampire who loves what he is, loves his toys and loves his lot in life. There’s no ennui, no “woe is me, I’m a hot vampire”, no “I hate my Sire/Lover(s)/Self”. Nope, Graf is one super happy, super self-centered vampire with no deep dark pit of sadness/need/loneliness. He drives a sexy Italian muscle car, smokes like a chimney, and feels zero remorse when he chomps on humans. As the book opens, Graf is on his way to a giant Independence Day party in Washington D.C. when he becomes lost in Penance, Ohio.

I know that in this day and age we all have some sort of GPS technology (hell, even my mother-in-law has it and she’s hopeless with technology), and conveniently, Graf's isn't working. So after nearly making roadkill out of a deer, Graf decides to stop for – wait for it – a map. Graf heads into a presumably deserted gas station to see if he can scrounge up (read: steal) what he needs when he runs into Jessa and a monster called "It".

Since I’m feeling rather lazy, I’m going to let the book take care of giving you some of Jessa’s character. And you’ll get to see why this was fun to read, even if the story was a bit thin:

“What was up with the sheriff’s wife? did you piss on her birthday cake or something?”

Jessa didn’t answer. She kept her head down as they walked, still hugging her arms around her chest.

“Well, let me feel free to form my own conclusions, then,” he went on. “You have a reputation.”

“What are you, from the sixties or something?” she snapped. “A ‘reputation’? Who am I, Rizzo?”

“I see I have struck a nerve.” He followed behind her, kicking stones down the road. “And, while dated, reputation is a perfectly good word. You have one. Either that, or you stole Marjorie’s boyfriend when the two of you were in high school.”

Jessa stopped walking and dropped her hands to her hips. Without facing him, she ground out, “Yes, everybody in town thinks I’m a whore. Are you happy?”

Yep, Jessa is an outsider in a small town; and might as well have a scarlet letter tattooed across her chest. But Jessa is not hick; she’s had a taste of the big city and she’s neither naÃ¯ve nor uneducated. Jessa would leave Penance if she could, but that’s the problem with Penance: no one has been able to leave the town in years, and all the town’s residents have been stalked by “It” at one time or another.

Put a small Midwestern town together with an inexplicable monster and residents that have been trapped together for years with no outside contact and it’s a recipe for suspicion, wild accusations and utter madness. One of the gripes I have with this book? Why so few cool heads seem to exist, let alone prevail. I know the citizenry has been trapped for a long time, but it seems that by the time the book opened, they’d given up on finding out how and why, and had become reduced to just dealing with their current reality. It felt like a bit of a stretch that so many people would just give up and accept that they’re trapped in a tiny little reality.

Penance’s citizens don’t trust each other, and every interaction has a pitchfork mob just waiting to happen. Assuming that they might welcome, let alone trust, someone that suddenly appears in their closed off little world is just silly. Graf immediately recognizes that he has major problems: he doesn’t have a food source that can be easily overlooked, he may not have a permanent home, and the first person the town will attack is an outsider. He does quite a bit of fancy footwork to keep the fact that he’s a vampire secret from everyone.

The majority of the secondary characters in American Vampire could have been cast straight from Merlott’s bar in the Sookie Stackhouse series, and frankly Jessa was easily the sharpest tool in the shed. The background cast along with the somewhat uninspired mystery put a dent into my enjoyment of Graf and Jessa’s developing relationship, which was a lot of fun to read. I felt that the end of the book was incredibly rushed, and could have done with more of Graf and Jessa and less with the weak mystery. C+.

Note: this book is not available digitally until March 1, 2011.

→ Shuzluva
Previous article: REVIEW: The Way to Texas by Liz Talley
Next Post: REVIEW: What I Did For A Duke by Julie Anne Long