I decided to try Always a Stranger, the second in your Victorian Era set historical romance series, because it sounded unconventional and different. The fact that I enjoy your Twitter presence did not hurt either. 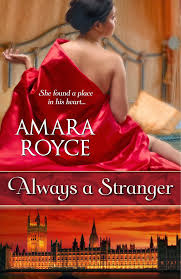 Set in the 1850s against the backdrop of the Great Exhibition which was held in London’s Crystal Palace, Always a Stranger begins with the performance of a fan dance. The dancer is a graceful Japanese woman. Observing her is Skyler, Lord Ridgemont, and as he watches her he forgets to breathe.

Sky has only recently inherited his earldom, following the deaths of his father and brother, and as a second son, he never expected to become earl, nor does he feel suited for that position. He also wasn’t expected to inherit by his family members, and they are having difficulty accepting this, as his cousin the Marquess of Bartwell reminds him.

Bartwell lusts after the same fan dancer who has caught Sky’s attention, and he tries to insist that Sky introduce him to her in his capacity as an official representative of the Royal Commission which oversees the Great Exhibition, but Sky refuses, since the exhibition must remain above reproach.

After Bartwell departs, Sky looks for the dancer—he needs to ask her where he can find the troupe’s manager so the latter can sign a contract—but she disappears. He sees another performer, a boy who bears a family resemblance to her, but the child appears unable to answer his questions in English.

Sky has another near miss with the dancer, and another encounter with the boy following a disturbing knife-juggling performance by the child. He is starting to despair of ever being able to speak with the dancer when he meets her at one of his eccentric aunt Lady Devin’s dinner parties.

The dancer introduces herself as Miss Hanako Sumaki. She is not just a talented performer, but a good translator, possessed of an unusual facility with languages and fluency in twenty of them. Miss Sumaki explains to Sky that she serves her employer, Mr. Broek, as a translator on his travels, and is present at the dinner to translate for a man named Mr. Jarlsberg.

Jarlsberg insists that Miss Sumaki’s employer told him she could be engaged for additional services; Miss Sumaki insists otherwise.

What Sky doesn’t yet know is that Hana, as she is called, is working for Mr. Broek under duress. Broek is not only her employer, but also her guardian—and that of her ten year old sister, Takara.

Broek runs a human trafficking operation, with women brought from the Far East to England to be raped by Mr. Broke’s clients. Broek plans to auction the women, including Hana who alone among them has remained a virgin (in order to drive up her price, though given the other women’s status, this read a bit contrived).

Broek has promised Hana that no harm will come to Takara as long as Hana obeys him, and by holding her sister’s safety over her head, he forces Hana to go along with his plans.

Immediately following the dinner party, Mr. Jarlsberg and Hana leave the room. Sky finds them in an altercation. Before he decides whether to intervene, Hana defends herself very ably. He behaves inappropriately in Hana’s presence, and Hana chastises him for not stepping in when he had the opportunity. Later, grateful for his help, she kisses him on the cheek but he turns his head and their lips connect.

They rejoin the party, and at the end of the evening Sky’s aunt, Lady Devin, asks him to see Hana home. Hana is angered when Sky inquires about her age, and she proceeds to give him a wonderful setdown in which she calls him on his double standards:

“Tell me, Lord Ridgemont, how often, in casual conversation, do you ask ladies of the ton their ages, as you just asked me? Do you regularly, in their presence, insinuate that they are no more than concubines or courtesans, as you did the first time we met? Do you question, directly to their faces, both their brains and their morals? I would hazard a guess that such inquiries are exceeding rare in polite society.”

To his credit, Sky realizes she is right and offers her a sincere and unqualified apology which Hana appreciates and accepts. But she evades his company and attempts to return home on her own. Sky manages to follow her on her way home, but by then she is dressed as a boy, and he realizes she is the “child” he encountered at the Exhibition—as well as a few other performers.

Sky is fascinated by Hana, and Hana finds herself attracted to him despite the danger such an attraction poses. As they encounter each other again, she longs to trust him with her secrets, but the danger is too great. Broek is not only capable of violence, but known to beat Hana or the other women when they displease him. If Sky, a royal commissioner, grows suspicious of Broek’s operation, great harm could come to the other women, for whom Hana feels responsible—or worse, to Takara, Hana’s ten year old sister.

One of the things I liked best about Always a Stranger was Hana’s character. She is a lovely person, honorable but forced to practice deceit, brave in the face of untenable circumstances.  Though greatly vulnerable, Hana possesses a core of strength, one that doesn’t allow her to forget the respect with which she and those she strives to protect deserve to be treated.

I also liked a great deal that the strain of being viewed as a foreigner was depicted with complexity and nuance through Hana’s POV. Some people welcomed Hana while others did not, but even those who were more accepting were curious or saw her as exotic at first. That this took its toll on Hana felt authentic to me, and I appreciated the sensitivity with which her experiences as a newcomer to England were portrayed.

Truth to be told, I was less interested in Sky. Although it was refreshing that propriety was important to him, initially he did not come across as a layered character, and seemed more concerned with appearances than deeply honorable.

Sky’s personal conflict, one of feeling ill-suited to the role of earl, was told more than shown at first, so I didn’t connect with it until much later in the book. But I liked that when called on his privilege by Hana (this happened more than once) he always owned up to it.

Sky’s interest in Hana was very strong before he ever got to know her as a person, and for a long time he was uncertain how much of what she showed him was her true self. The fact that he didn’t really know her made his love of her feel shallow and a little immature for a good part of the book.

Consequently, the external plot conflict with Mr. Broek and his human trafficking operation was more compelling than the romantic relationship. I read on to see what would happen to Hana, her sister Takara, and their fellow captives, for whom I felt a great deal of anxiety, but I also felt a bit detached from the romance.

I empathized with Hana’s hesitation to trust Sky with her secrets. Even with Hana’s inner strength, her position as Broek’s captive and Sky’s far more powerful status made the balance of power in their relationship feel too uneven at times. At the end of the book, I still wasn’t completely sure that Hana had the agency to choose Sky from a secure enough position that it was a free choice.

Characters from the previous book in the series, Never Too Late, played an important role in this book and for a while I was confused and thought their storyline was being set up for a resolution in a later book. It wasn’t until I finished Always a Stranger and reread Sunita’s review of Never Too Late that I realized their story had already been told in the prequel.

I was pleased to find that Always a Stranger was indeed a fresh story, and it reminded me a little of some of Courtney Milan’s work in that its underlying message was one of social justice. I appreciate that this was pulled off in a way that did not feel heavy handed, though there were points in the story in which the number of English aristocrats unconcerned enough with their reputations or positions to come to the women’s aid stretched my credulity.

For the most part though, the book felt true to the time period, and I liked the way the Great Exhibition was described. I also liked the prose and especially the descriptions — some of the dialogue was a little stiff. Although not a perfect book, Always a Stranger deserves attention from readers looking for something out of the usual mold. C+.